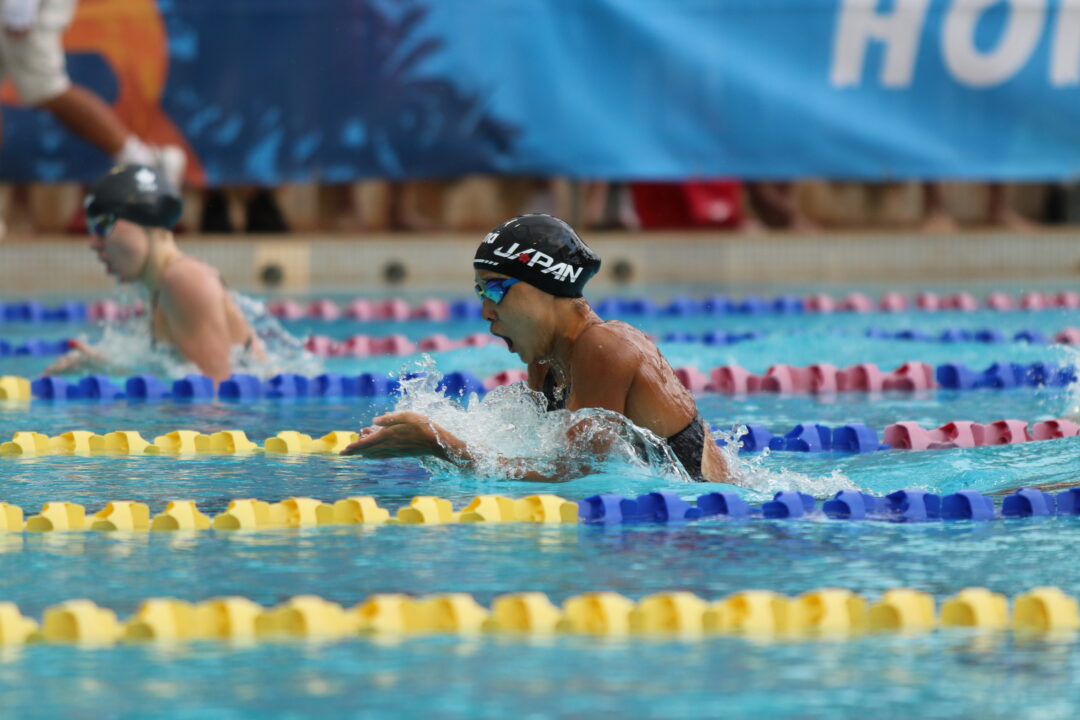 Mia Narita played a critical role in helping lead Japan to the top of the medal table at the 2022 World Junior Championships. Current photo via Jon Reiter

Not only was there a three-year gap between competitions for the first time since 2011, having been postponed because of the COVID-19 pandemic, but there were also several nations that generally occupied the upper tier of the medal table absent.

Russia was banned from participating, as was Belarus, while the United States, Australia and Canada all opted not to send teams to the meet and instead raced the Junior Pan Pacific Championships the week prior in Hawaii. Great Britain was also not in attendance.

As a result, the door was opened for some other countries to shine.

Finishing atop the final medal table was Japan (who also raced at Junior Pan Pacs), as they came out with seven gold medals and 19 total. Both numbers matched the country’s previous best, which it achieved in 2011 when Japan finished second on the medal table behind the U.S.

The Japanese team had five different swimmers win gold individually, with Mio Narita having a breakout showing to sweep the girls’ individual medley events to mark the only athlete from the team to win two. The 15-year-old also swam the anchor leg on Japan’s winning girls’ 400 medley relay, which was the country’s only relay to make it onto the podium.

In total, Japan had 14 swimmers win at least one individual medal.

Following Japan on the medal table were Hungary and Poland, who both finished with seven gold medals and 14 total, though the Hungarians earn a higher placing with their seven silvers to Poland’s one.

Hungary’s highest ever total medal tally is 16, won in 2017, while Poland’s performance in Lima marks its highest ever after winning six medals back in 2008.

The Italians actually accumulated the most medals of any nation with 20, but with only two gold, they find themselves back in eighth on the official table.

Among the teams that made national history include Portugal, Cyprus, Slovakia and South Korea.

And I would like to read an article about individual swimmers.

I have to agree that a least 1 or 2 articles doing comparisons with Jr. Pan Pacs and Jr. Worlds would be quite interesting. Esp. with many of the ‘big gun’ nations NOT in Lima, it would be helpful.
NB: I LOVE the fact that we were able to see swimmers from “2nd tier” swimming powers like Turkey, Poland, and Portugal put in nicely done races across the strokes and distances!

The different age eligibility for girls makes that difficult and excluding those who aren’t eligible would leave big holes in every Junior Pan Pacs countries’ roster besides Australia’s. One obvious example would be the girls 200 free where the US would be left with no entrants because they were all born in 2004 and every girls relay would be excluded too.

good points, but i think it will still be fun to see how the times swum compare for both competitions.. its easy enough to remove the ineligible swimmers i guess

Junior PanPacs vs. junior Euro would be even more useful- as PanPacs was the first meet for most of the Swimmers while WJC was the 4th most of the key athletes…

Yes, France had a way better team at junior euros and two of the biggest juniors not just from Europe, but the World wasnt in Peru.

Lana Pudar and Eneli Jefimova would have destroyed the field is butterfly and breastroke. Or Roos Vanotterdijk in back and butterfly. But they are not machines. All three girls from this small nations for swimming have raced the whole summer as well.

Eneli missed the Europeans, but won all three golds at the junior europeans, with amazing times in 50 and 100.

I think the main difference is the absence of Russian swimmers. For the rest – if I compare the results of Panpecs( and taking off those swimmers who would not have been eligible for WJC) I would not see significant differences.

The comparison between medal winning times at Jnr PanPacs and Jnr Worlds, would be a discussion going on at SwimSwam Central right now and will certainly be a well read and commented on article when it is published (😉😁😁 no pressure SwimSwam!!)

As Troyy said in response to another comment, a huge number of medallists at Junior Pan Pacs would not be eligible for Junior Worlds (the cutoff for girls at JPP is 18 while at JWC it’s 17). Every female US relay would have to be excluded, and most of their individual medals as well.

Australian swimmers were mostly 15-17 yrs, so would have been great to see the younger USA juniors racing at PanPacs.

Than we should take the highest eligible girl’s result as comparison. I assume they took 2004 girls to the competition because they are more performing than 2005 and 2006. ( at this age it could be a huge effect). It may end up that US is not anymore such a big powerhouse as some of you thought. Although it is already the case for the male swimmers- as we could experienced already in the last WC. New wave from Europe ( Milak, Popovici, Marchand, Ceccon) already dominating swimming. Plus, there was no age difference regarding eligibility between PanPacs and WJC…