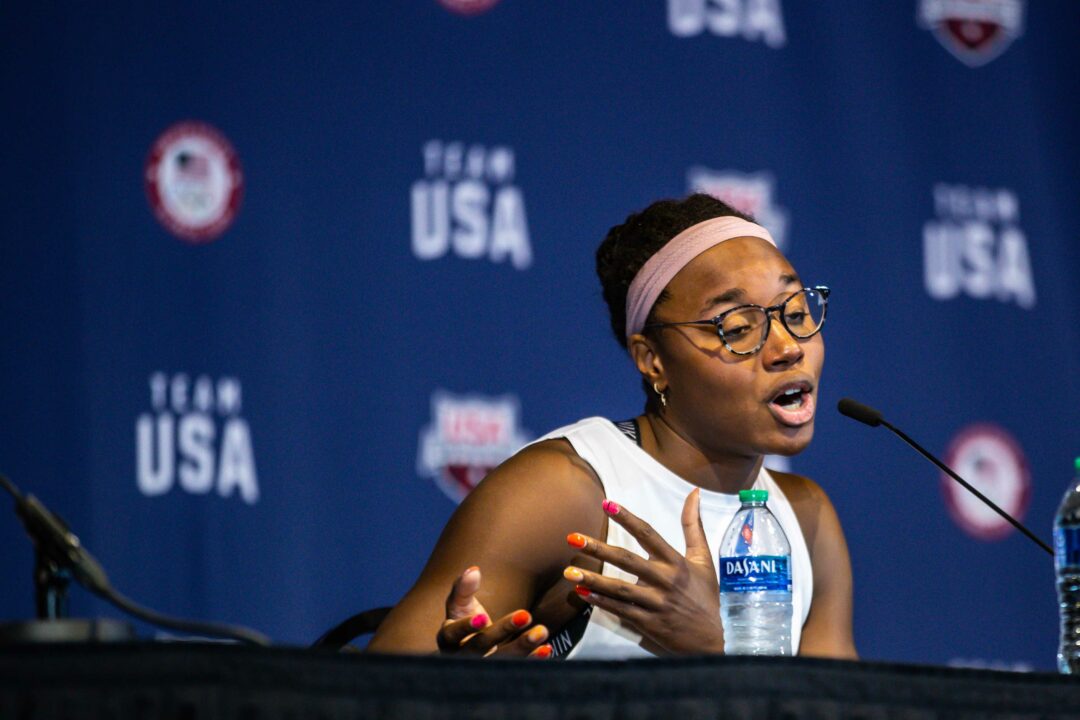 Symptoms include fatigue, faster heart rate even well after practice, and sore muscles, which can lead to decreased performance. Current photo via Jack Spitser/Spitser Photography

During last week’s U.S. Olympic Trials, news came to light that four-time Olympic medalist Simone Manuel had been diagnosed with Overtraining Syndrome (OTS) around early March, and ended up taking an extended three-week break out of the pool in April.

Manuel spoke openly about her experience with OTS after failing to advance to the final of the women’s 100 freestyle, the event in which she won 2016 Olympic gold and back-to-back World Championship titles in 2017 and 2019.

Manuel ended up qualifying for the U.S. Olympic team in the 50 free on Sunday night. After that victory, the 24-year-old mentioned that she wants to be a voice for other swimmers that have dealt with similar symptoms.

Below, find an overview of exactly what OTS is, and the resulting symptoms, from Shawn Trokhan, M.D.

Disclaimer: This is not medical advice.

I’ve gotten a lot of questions in and out of the office recently about Simone Manuel and Overtraining Syndrome (OTS). And so I thought it would be helpful to give a quick overview of what happened, and more importantly give insight into what to look for in young athletes as they work hard to achieve success at different levels.

I think the most important thing to discuss from the outset is “What is a Syndrome?”  A syndrome is simply “a group of symptoms which consistently occur together, or a condition characterized by a set of associated symptoms.”  A syndrome is not a disease per se. A syndrome is not necessarily testable with simple bloodwork or an x ray. It is just a group of symptoms commonly seen in a situation, many times affecting different body systems. As well, many times one symptom in a syndrome can lead a patient down a path to the other symptoms.

We have a saying in my office. “Sometimes the fastest way to move forward is to Stop.” And so while I am not her treating physician, it sounds like Simone made a tough but necessary choice. She stopped. She broke the cycle, rested, recalibrated, and came back.

Overtraining Syndrome is something that can be seen at many levels of swimming. And I think we are all lucky to have had an athlete like Simone bring it to our attention, but more importantly, come out the other side successfully.

Shawn Trokhan, M.D. graduated from Princeton University where he was an Ivy League Champion swimmer, NCAA All-America award winner three times, and Olympic Trials qualifier.  He studied medicine at the Case School of Medicine and the Cleveland Clinic in Cleveland Ohio, then completed his orthopaedic surgery residency at Mount Sinai in New York City.  Dr. Trokhan is currently in private practice in northern NJ.  You can read more about him at www.Trokhan.com.

I swam all growing up thru HS then played bball in college. Weird combo I know. Serious topic – glad it was explained here. A great trainer I had once said “no such thing as over-training, only under-recovery”. This goes for both mental and physical recovery. Human bodies were created to take a beating (they can literally heal themselves), and proper recovery is what can separate great performances from average ones. Out of pool activities/livelihood can make a big difference in how the response to in the pool training.

Quick story – I hung with Ryan Murphy before Outside Lands (festival in San Francisco) in 2019. He said that in Oly years his out of the pool lifestyle does… Read more »

My coach said he would give us Overtraining Syndrome after tonight’s practice.

I suspect that there are at least two more elite high-profile female swimmers who underperformed at Trials with either OTS or an eating disorder (perhaps a combination of both since they often go hand in hand). Of course eating disorders are not limited to women or athletes, but in this age with Instagram and body-image issues exacerbating things more than ever, it seems like an unfortunately easy trap to find yourself in as a high profile high visibility female swimmer.

I’m not going to name names – obviously commenting on swimmers’ bodies is a thorny, problematic thing – but I’d noticed well before Trials that certain swimmers were looking unhealthily thin. I know I’m not alone in noticing this… Read more »

4
-1
Reply
Bill Swims After His Horses

A 10 km open water race takes roughly 2 hours. A marathon takes roughly 2 hours. Let’s assume a 6 km pool practice is roughly equivalent to half a marathon. At a major D1 university that had the American record in the 200 freestyle relay at one point, our sprinters we’re doing roughly 6 km a practice 10 times a week. Do you think Usain Bolt (200m=50 free) would do 10 half marathon practices in a week? The answer to that is probably not. The follow question is would he be faster if he did 10 half marathon training sessions a week? Dance to that too is probably not. So then why do we do it in swimming?

I’d be willing to bet that over 50% of college swimmers had OTS at some point in their careers-most never get diagnosed. It’s nothing new. Most swimmers push through though which typically leads to negative results-poor performances and/or quitting the sport all together. The big difference here is that she recognized their was an issue, saw a Dr who confirmed it, and her coach recommended an adjusted schedule.

She must have been feeling really bad to need a 3 week break months out from Trials.

After listening to press conference where Simone openly and honestly talked about what happened, and reading articles and comments here on SS, I have more appreciation of Simone’s admission to dealing with OTS.

Competitive swimmers and athletes all take pride in their ability to train harder to be at their best and their mental toughness to handle training demand and pressure in competition. Therefore admission to over-trained is admission to accept ones limitation. This often being interpreted as showing or admission of weaknesses, which is a big no-no in the norm of athletic pursues in the mind of the athletes, as well as spectators. And it doesn’t make it easier to say so even to peers when you see everyone… Read more »

Lochte in 2012 was definitely overtrained… but did he have the syndrome? Genuinely curious as to everyone’s thoughts