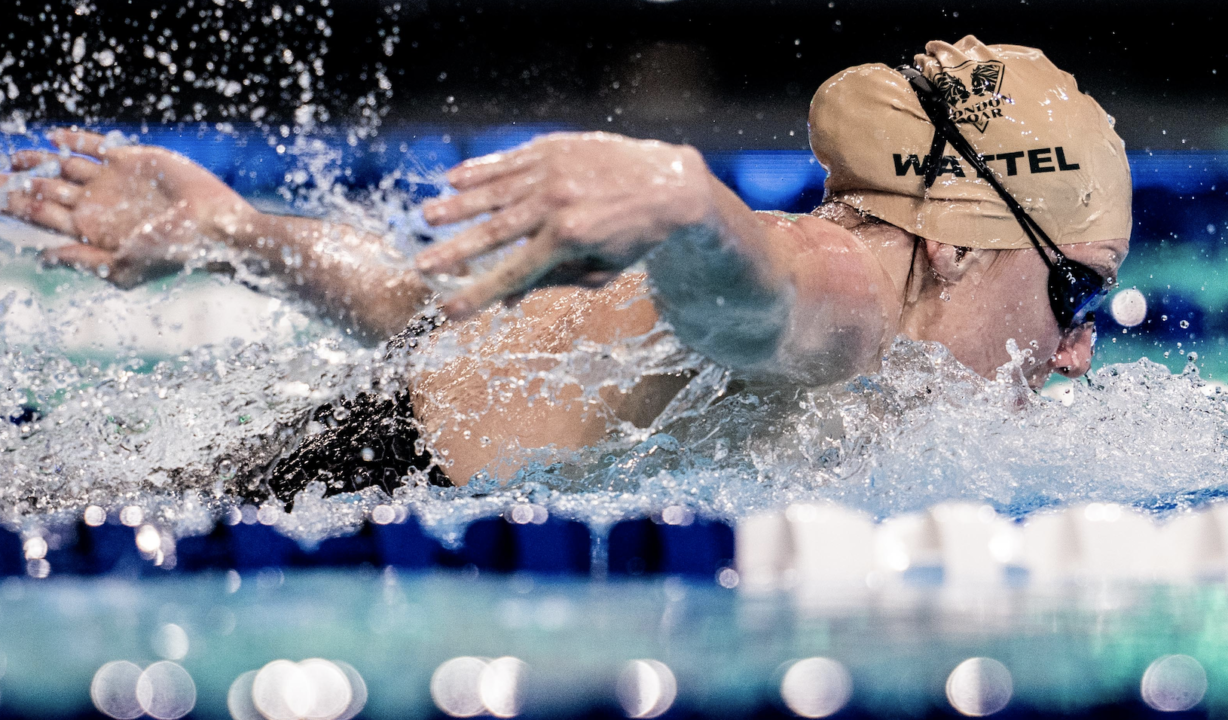 Marie Wattel took gold in the women's 100m freestyle in Marseille, while Noe Ponti lowered his own Swiss national record mark twice in one day Archive photo via Mine Kasapoglu

The women’s 100m freestyle final was loaded with fast swims tonight and ultimately saw first-seed and home favourite Marie Wattel taking gold in a time of 53.32. Attacking the race and splitting extremely close to how she split this morning, the Loughborough-based athlete went 25.25/28.07 – compared with 25.50/28.03 from the prelims.

Dutch ace Femke Heemskerk was extremely close to nabbing the win in Marseille, though finishing in second with 53.41 and bettering her earlier mark of 53.71.

A tight race for third saw French national record holder Charlotte Bonnet getting her hand on the wall ahead of Italy’s Federica Pellegrini in 53.70 – replicating the exact 1-2-3 finish from this morning’s heat.

A shake-up in the men’s 50m fly came in the form of a new national record for Swiss swimmer Noe Ponti this evening, who took the top spot in 23.39. That’s the second time he has broken his nation’s record in the event today after posting 23.48 in the prelims. His finish this evening also backs up his winning 100m fly performance from yesterday.

Olympic champion Florent Manaudou didn’t manage to do the free-fly double in the 50’s here in Marseille as he slipped outside of a podium finish in the event (23.55). He won the men’s 50m free on day 1 of the competition (21.72) but was out-touched by fellow Frenchman Maxime Grousset and Nyls Korstanje of the Netherlands who finished in 23.52 and 23.54 to take second and third, respectively.

In front of a home crowd, French swimmer Yohann Ndoye Brouard delivered a stellar swim in the men’s 200m backstroke to shave 0.29 off the national record in winning fashion.

World record holder in the short-course equivalent of the event, Kira Toussaint stormed to a win in the women’s 50m backstroke in a time of 27.87. That lowers her morning mark of 28.02 to slip under the 28-second barrier and sits 0.50 away from her own Dutch national record time (27.37).

The men’s 200m free saw Lithuanian freestyle ace Danas Rapsys come out on top with his time of 1:46.98. He took gold ahead of Swiss Nils Liess – who pushed Rapsys all the way to the finish and was just behind in 1:47.40. Liess’ countrymate Roman Mityukov was a fraction off the silver as he touched in this in 1:47.44.

His nearest challenger Christopher Rothbauer touched in 2:11.43 while third was taken by Germany’s breaststroke-ace Marco Koch (2:11.72).

Leon Marchand backed up his stellar 200IM from yesterday by winning the men’s 400IM this evening in a new French national record time of 4:14.97. The previous mark was his own from the World Junior Championships in 2019 (4:16.37) and is a considerable improvement on his morning time of 4:22.59.

An all-French podium finish in this event saw Emilien Mattenet and Clement Bidart take silver and bronze in 4:16.45 and 4:22.11, respectively.

Switzerland have a neat 4×200, they might final in Tokyo. Btw, Lisa Mamie is Swiss.