What to watch for: US Junior Nationals day 2 finals feature some lofty NAG record hunts 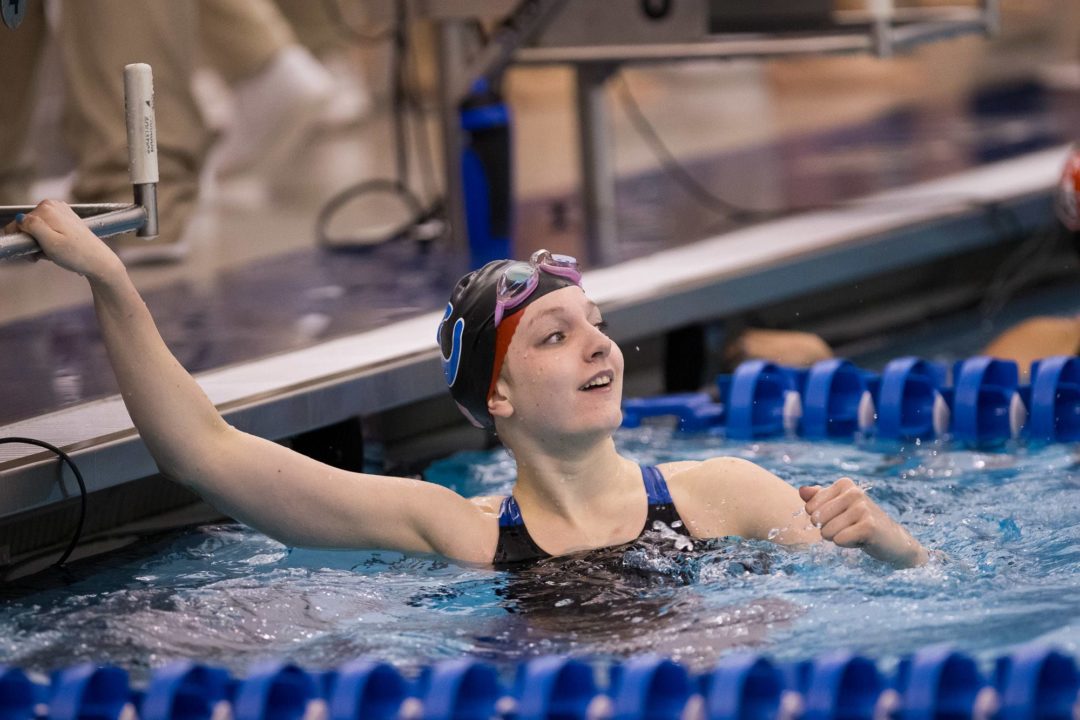 Veronica Burchill is one of three Carmel girls in the 100 free final, and will also likely swim on its 400 free relay, which has a legitimate shot of taking down the 15-18 NAG record set by Missy Franklin & co. in 2010. Archive photo via Tim Binning/TheSwimPictures.com

What You Need to Know For Day 2 Finals:

Full day 2 prelims recap.
Finals Heat Sheets.
Finals Time Line.
All the information you need to follow the meet.
Two scratches this morning: 15-year-old Michael Andrew will not swim the C final of the 200 back, where he qualified 19th. Trying to double that race with the 100 free almost certainly hurt the latter race, where Andrew didn’t make finals. That means his day will be done, leaving him to prepare for tomorrow. There’s also the possibility Andrew is targeting Senior Nationals next week as his primary focus, and he could be saving swims in preparation for that. The other scratch was Palo Alto Stanford’s Andrew Liang, who made the C final of the 100 free, also taking 19th. Liang will likely swim on his team’s 400 free relay tonight, and will elect to race only one 100 freestyle in the finals session.

What You Need to Watch For on Day 2 Finals:

15-year-old Michael Taylor was explosive this morning in the 200 back, dropping four seconds off his seed time to take the top spot in the event. His 1:59.27 is getting into some seriously quick territory: the National Age Group record in the event is 1:57.03, set fourteen seasons ago by American backstroking legend (and current world record-holder) Aaron Peirsol. Still on the younger end of his age group, Taylor has just over two seconds to go to break that NAG. Can he chip away a bit more of that margin tonight, especially in a night backstroke swim without the sun glaring down in his face?

Both 100 freestyles offer a first glimpse at a swimmer competing for multiple titles in this meet. On the girls side, Amy Bilquist of Carmel Swim Club has a shot to be the dominant swimmer of the meet by week’s end. She went 54.88 for the top seed this morning, and already beat her top challenger, Stanzi Moseley, who was in the same prelims heat. Bilquist, 16, is also chasing wins in the 100 back and 50 free, where she is the top seed based on psych sheets.

Meanwhile Townley Haas has a chance at a win in the 100 tonight, which might be his toughest test in trying to win three or more titles. Haas is the top seed in the 200 and 400 and also has a shot at the 800. He’ll show off his speed tonight in trying to crack the 50-second barrier. Haas went 50.39 this morning.

To move back to Bilquist for a moment, keep an eye on her Carmel Swim Club’s 400 free relay. The team put 3 swimmers in the top 6 on the girls side this morning between top-seeded Bilquist, 3-seed Claire Adams (55.89) and 6-seed Veronica Burchill (56.45). Their relay is seeded just a couple seconds off the National Age Group record that’s held by superstar Missy Franklin and her Colorado Stars team from 2010 – coincidentally, that record was set in this same Irvine pool, which hosted the National Championships in 2010.

Looking at the prelims times of those three, plus their fourth finisher, Rachel Hayden, the projected time goes something like this:

The NAG record for 15-18s is 3:45.50. With Bilquist, Adams and Burchill swimming the open 100 tonight, there’s the possibility that fatigue affects this relay. Still, they’ve got a great shot at pulling off this NAG record, especially when you start factoring in the time saved by relay exchanges.

(As a side note, that NAG record-holding relay is incredibly talented. Besides Franklin, the relay was composed of her current California teammates Caroline Piehl and Kelly Naze, plus Georgia’s Jordan Mattern.)

The entry deadline for Nationals was Monday. But I noticed Kukurugya’s seed time in the 200 fly is from her swim last night. So you can change your entry time AFTER the deadline?

KeithM – you can change your entry time if the swim that happened after the deadline was your first cut in that event. Per the rules. The reality is…they may have just pulled best times from this morning.

The top swimmer in each event who obtained their best times at junior nationals are listed below. Their national age group rank with updated time is in parenthesis.

Great job.
It’s cool to see I’m not the craziest swimming fan in the world! 😉

I noticed that Michael Taylor is electing not to swim at Nationals.

Kinda makes sense when you consider his best was 2:03 before today though – 2:03 won’t final at nationals (I would assume) although obviously 1:59 would at least warrant the B final one would expect

It just means he won’t be eligible for the Jr Pan Pacs team at the end of August. Although obviously he’s likely to be named to the Junior national team for the next year.

Can someone catch me up with townley has? I know he took out Phelps’s nag in the. 500 free but that’s it. Is he a legitimate 100/200/400 threat? What kind of future does he have for usa swimming?

I see him as the next US dominant 200 free/400 free male swimmer.
Perfect mix of speed and endurance in my opinion.