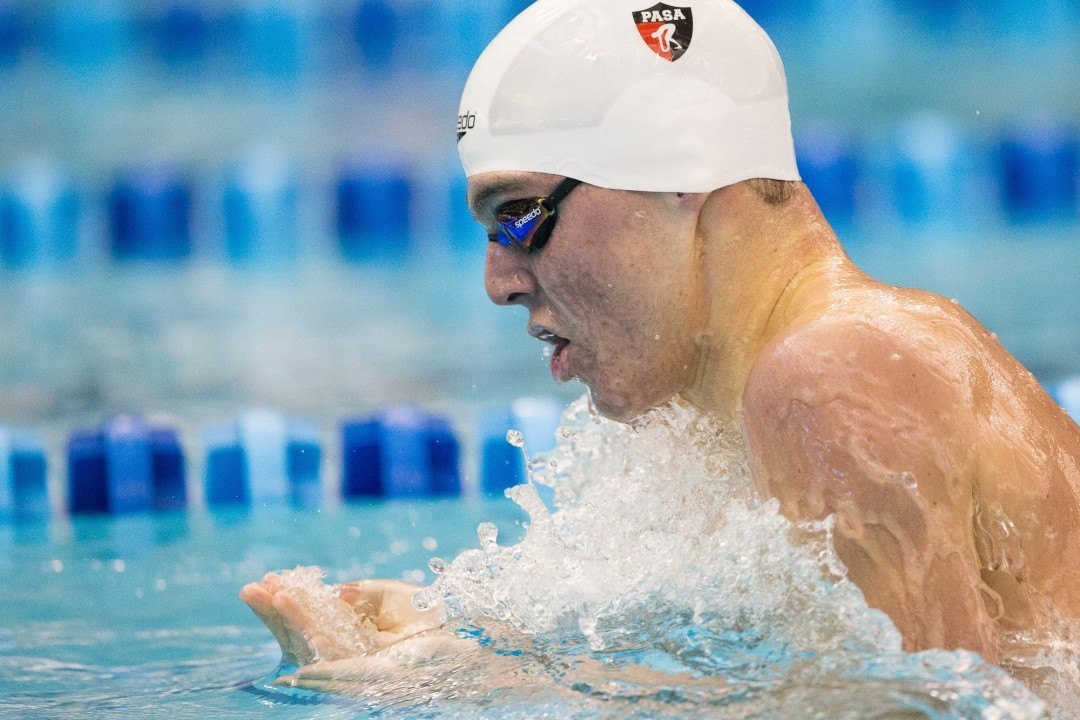 Curtis Ogren was one of California's big scorers at the Junior National Championships in Irvine. Check out interactive maps of state-by-state scoring here. Archive photo via Tim Binning/TheSwimPictures.com

With both Junior and Senior U.S. Nationals now behind us, and Pan Pacs still a week away, now seems like the perfect time to take a look back at the two weeks that were from a slightly different lens.

Let’s start with Junior Nationals: one of the unique aspects of Juniors is that it brings together elite swimmers and clubs from across the country, combining states that are often separated by LSC divisions during the year. But which states tend to be best represented at Juniors? We compiled data from all point-scorers (top 16 finishers) at Junior Nationals to come up with the interactive maps and graphs below.

It’s not terribly surprising that California ran away with state scoring. After all, the state hosted Juniors, meaning very few California clubs decided to forgo the meet because of travel expenses. It’s also one of the biggest and most populous states in the U.S. But even taking those factors into consideration, Californians were impressive at Juniors. In total combined scoring, California didn’t just lead, it dominated, putting up more than double the points of the next-best state.

Some of that was overall team champ Palo Alto Stanford, but not nearly all of it. PASA put up just over 300 combined points, about a quarter of Cali’s total. California saw 22 boys teams and 18 girls teams put up points over the weeklong meet.

Indiana finished second, and its total was much more a one-team show. The girls of Carmel Swim Club led all female scoring with 290, and that accounted for over half of the state’s 523 total points. Interestingly enough, Indiana did quite well at this meet despite the state hosting YMCA Nationals the same week and NCSA Junior Nationals the following week. Those meets could have provided lower-cost options for Indiana’s junior swimmers, but the elite talent of the state still seemed to flock to Irvine for Juniors.

Other high-placing overall states: Florida, Texas and North Carolina rounded out the top five spots, showing some real geographic diversity among the meet’s top scorers. 35 of the 50 U.S. states scored points at the meet.

A disclaimer: in breaking down point totals by state, we counted every swimmer as a member of the state where his or her club is based. There are certainly some occasions where a swimmer will cross state lines to join a club, but for the sake of simplicity, we’re considering things at a club level.

Of course, there are some multi-site mega-clubs that span multiple states. Nation’s Capital Swim Club would be a well-known example. In those cases, we considered the club a member of the state where it’s main headquarters are located – in NCAP’s case, that is Virginia.

See below for point totals by comparison to state’s population.

Below is a set of interactive graphs and maps. You can shuffle through them by clicking the tabs at the top.

Some quick explanations: in the first tab, you see a map showing point distribution. The darker red the state, the more points scored. It’s a very visual representation of just how dominating California clubs were at this meet. Hover over a state with your mouse or click on it to view more stats.Below is a set of interactive graphs and maps. You can shuffle through them by clicking the tabs along the top.

Click and hold to scroll around on the maps.

The second tab is another map, this one showing each state’s rank. The darker blue the state, the higher it ranked. Once again, you can see more numbers by clicking on a state or just hovering over it with your pointer. States without labels or numbers were those that didn’t score any points at Junior Nationals.

The rest of the tabs show various points breakdowns, including boys and girls separately, plus how many individual clubs scored points for each state.

Mobile users may wish to follow this link to view the interactive maps and graphs on the web.

So, you say, of course California is going to score more points than Vermont. California has 38 million citizens, and Vermont has just over 600,000.

Below, we’ve controlled for that variable. While we don’t have data available to us regarding the number of registered  swimmers in each state, this is about as close as we’re going to get.

The clear winners here are the state of Indiana. They have a population roughly 20% the size of California’s, but had the second-most points of any state. The Californians didn’t do poorly, however: they still came in 4th even when their huge population is accounted for.

I don’t know why I’m not the 50th person to write a comment about how AWESOME this detailed statistical analysis and interactive distribution map are! 🙂

Are there websites like this helping to grow sports like track, gymnastics, soccer or hockey? There are places you can go online to find results, or reports on star athletes, but the depth of coverage here is amazing, and this article proves that! To improve anything, you have to first understand it, so collecting data like this is a step in the right direction!

You take your reporting very seriously here at SwimSwam! THANK YOU!

I concur for the 51st time!

Hispanics are 48 to 50 percent of the kids population in Southern Ca.

I grew up in Indiana feeling like a horrible swimmer, because no matter how hard I worked I couldn’t even make finals at the state meet. The talent pool was just too deep. Then I talked to swimmers from elsewhere in the country and found out that I would have have been their high school record holder. In hindsight I feel better about my career. Does anyone know why Indiana is so strong? We don’t have beaches, warm weather, or much wealth, so it doesn’t seem like we should dominate a country club sport like swimming. I’ve thought maybe it’s the Doc Counsilman legacy and/or the awesomeness of the IUPUI facility but I feel like it’s got to be more… Read more »

i grew up in SoCal then moved to Indy. What should have been difficult change ended up being easy because IN swimming seemed to be just like my former home. i always thought it was the Doc effect; but amazing how long the staying power has been. And it looks like it keeps getting faster in Indiana. Fun to watch now that I’ve moved away – and this article shows objectively what I’ve been saying for years: IN swimming is fast.

I know these numbers are just a fleeting contemporary glimpse. But I’m surprised to see Illinois so low. Consider how many top flight international caliber swimmers and Olympians the state has produced over the years. Or even just look at the number of Illinois swimmers on the current Pan Pacs roster (and I’m talking about athletes that grew up swimming in that state until college). Yet it is relatively low on this list (24th) compared to states like South Carolina (top 10)? A trend or just a blip?

That’s a good question, KeithM. I would bet some of it has to do with the Academy Bullets – when one of the biggest and most successful clubs in a state chooses NCSA Juniors over Speedo Juniors, that affects their ranking here quite a bit. I imagine there were several other clubs in the state that chose a short drive to Indianapolis over a flight to California.

Now this is a top state swimming list that actually has to do with the level of swimmers in each state. Not like the speedo top swimming States list where the top eight states on their list were nothing but speedo dominated States. this is awesome I would love to see a high school meet with the top five states in boys and girls competing against each other that would be awesome.

When are they announcing the Junior Pan Pac team or has it already been announced?

Great job! I really like to look at this type of information! Gives a different perspective!

You’re correct, the 52.5 points from the Wilton YMCA had gotten put into New Jersey’s total instead of Connecticut. Should be updated shortly