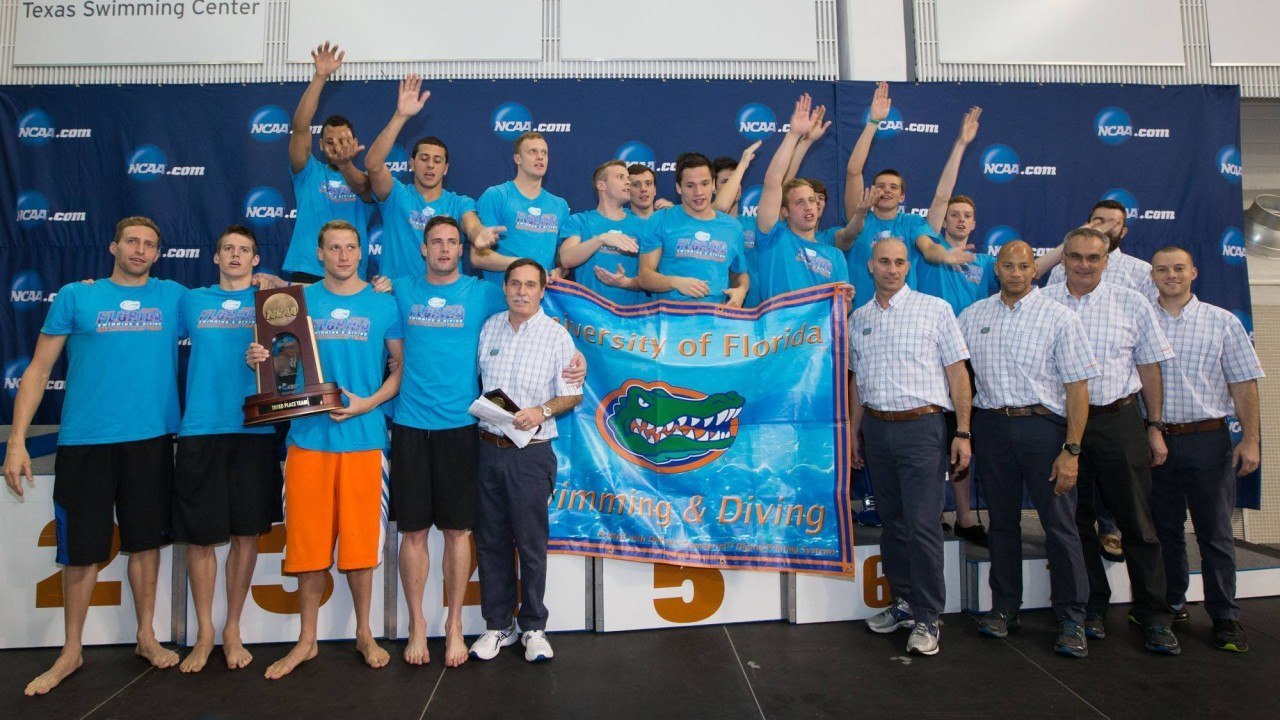 The defending SEC Champions from Florida will travel to Auburn for an SEC preview in late January. Archive photo via Tim Binning/TheSwimPictures.com

The Florida Gators and the Auburn Tigers will renew their rivalry in the pool on January 24th, 2015, as part of a challenging schedule released by the Gators on Thursday.

The two schools’ men’s programs have combined to win 24 out of the last 25 SEC Championships dating back to 1990, including the Gators winning the last two straight.

That meet, while a tough challenge, will be good preparation for both the Florida men and women, as it comes 3 weeks before the 2015 SEC Championships, which will be back in Auburn, Alabama from February 17th-21st.

The Gator women will start the season on the regular weekend, the last of September, but not in the regular fashion. They’ll begin with a dual meet against the Arkansas women, before both the men and the women roll into the All Florida Invitational in early October.

Next up, a co-ed LSU squad comes to town on October 10th, followed by a Florida road-trip to Kentucky on October 16th.

On Halloween night, both teams will travel for the women’s team’s biggest challenge of the regular season – a dual with the two-time defending NCAA Champions from Georgia. On the men’s side, this is the best Georgia team we will have seen in years, if not ever, which should be a great test for Troy’s men as well.

In early October, on the 8th to be specific, the Minnesota Golden Gophers men and women will make a trip to the Swamp to race Florida. That’s one of at least two southeastern U.S. trips on Minnesota’s schedule this season, as they also have a dual against North Carolina State in January – two opportunities to get out of the frigid Minneapolis cold in the winter.

The Florida mid-season invite will be at Georgia Tech this year from November 20th-22nd, with a select group going on to U.S. Nationals in Greensboro (which for the women is a preview opportunity of the NCAA Championship site).

Coming right out of Winter break, Florida will go for a dual meet against rivals Florida State, outdoors, in Tallahassee. This is a meet that has given Florida fits in the last few years, and they will likely be without many of their divers this season as the Tennessee Diving Invitational starts the next day in Knoxville.

The regular season will finish up with the trip to Auburn, welcoming in Tennessee, and then the SEC Championships.

Florida, who is often a regular participant in (and often a beneficiary of) Last Chance meets has this year decided to host their own. From February 27th-March 1st, a full week after SEC’s end, they’ll host swimmers from around the region in attempts to gain last-minute NCAA Championship qualifying times.

Florida’s Zone site, Zone B, will be in Athens, Georgia this year, before NCAA’s (men in Iowa, women in Greensboro).

The Florida women were 6th at NCAA’s last year and the men were 3rd, and both programs lost big to graduations. To the women that includes Olympic medalist Elizabeth Beisel and easily the team’s best breaststroker Hilda Luthersdottir; for the men, that includes 200 IM/100 fly NCAA Champion Marcin Cieslak and All-American sprinter Brad deBorde.

See the full schedule spelled out below.

It will be a ton of orange and blue!! Ha ha! War Eagle!