Vollmer Perfectly Consistent in Finals on Day 2 at Santa Clara 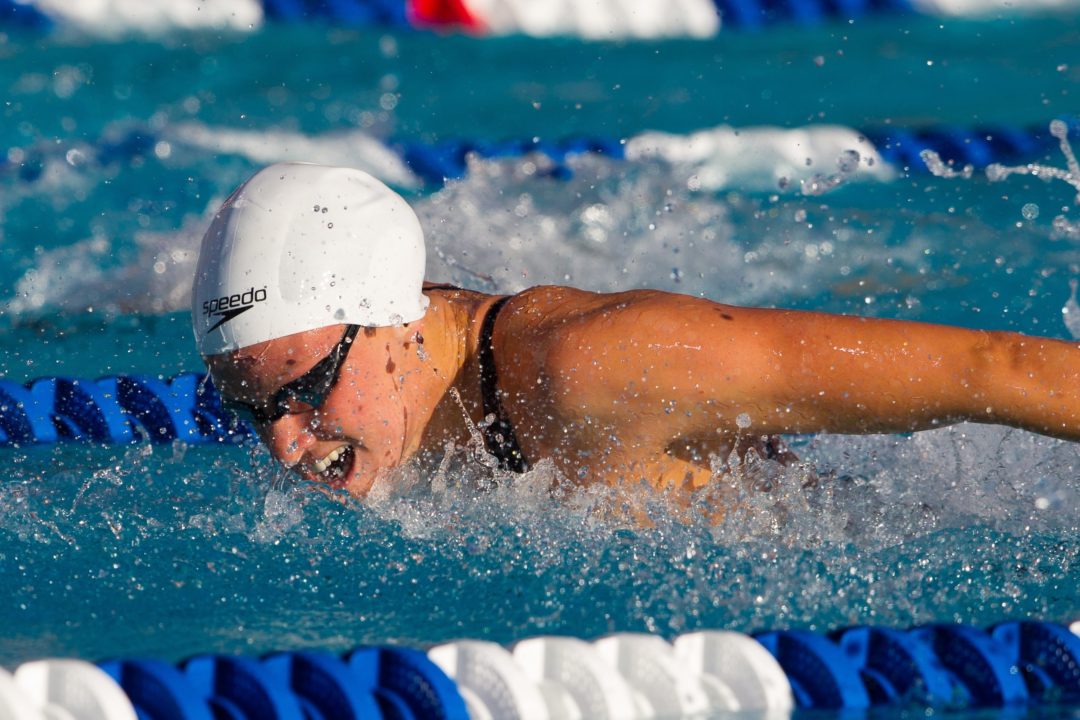 This report was contributed by Anne Lepesant. Ms. Lepesant has four daughters who are swimmers, including one who will begin at the Savannah College of Art and Design in the fall.

Night 2 at the Santa Clara Grand Prix saw some great swimming by American Dana Vollmer, and fairly good times by her teammate Natalie Coughlin. But a huge portion of the action was dominated by the “international” portion of the “International Grand Prix”.

Dana Vollmer was fantastic in the morning prelims, and sometimes at these in-season meets she’s had trouble matching her morning speed later in the day, but the last few meets that hasn’t been the case. She swam a 54.38 to top this 100 free final – which matched identically her morning swim in the event. (As scary as it is, that was only the third-fastest time by an American on Friday, with two swims in Austin bettering it).

Australia’s newest young superstar sprinter Brittany Elmslie took bronze in 54.77. Up until 6 months ago, she had never been better than a 55.5 in this race, and she’s now been under 55 seconds at four different meets, including a 54.0 in March to put her on the Australian Olympic Team. That actually easily bettered her countrymate Emily Seebohm who was 4th in 55.33. Canada’s Julia Wilkinson was 5th in 55.38, and Madison Kennedy (back in familiar territory in California after moving to Charlotte a few months ago) was 6th in 55.49.

South Korea’s Tae-Hwan Park got his night off to a great start by winning the 100 free in 48.85. To win the 800 and the 100 in back-to-back nights at a meet as loaded as this one is impressive. That’s about a body-length faster than he was in Canada last week. I think he will go after the 200-400-1500 triple in London, but if he really wanted to focus the other way, it would be great to see how fast he could be in a focused 100 free. He swam this event at Worlds last year – where he was .01 slower than this time in the semi-finals.

He was far ahead of the field, with a 49.95 from Anthony Ervin taking 2nd. The American men’s sprint weakness was really highlighted between the two big meets this weekend – while tons of Americans are swimming very fast, only Jimmy Feigen, and sort-of Michael Phelps, had even a decent 100 free.

Aaron Wayne has been a great college swimmer for Stanford the past few years, and he’s starting to develop to where, if he continues training, he could be a great relay swimmer for the Americans as well, with a 50.04 in this 100 free for 3rd. That’s within a tenth of his best time, and the fastest he’s been in-season.

There were a lot of other good names in this final, but not many other great times. Nathan Adrian was a 48.50 in prelims, but scratched the final to head to Seattle for his brother’s wedding.

Cal swimmer Caitlin Leverenz got out to a very fast start in the women’s 200 breaststroke, and held on for a win in 2:26.46. Her opening split of 33.34 was very fast for her, but generally speaking this season, she’s had faster ultimate results when she wasn’t quite-as-fast in the first 50 meters.

Santa Barabara’s Katlin Freeman was 2nd in 2:27.83, which is faster than she was at Nationals last year. Since a single, amazing 2:22 swum in 2009, she’s struggled to remain in the conversation with the elite breaststrokers in this country. She made the 2010 Pan Pacs team, and has continued taking a step back every year. But she looks like she’s back on the upward trend this year, with this time being faster than she was at Nationals last season.

Tunisian swimmer Sarra Lajnef, who trains in Gainesville, was 3rd in 2:30.09; that’s her best best time ever in textile, and gives her a FINA B qualifying time in the race. She also has one in the 100 breast, but that time is teetering on the edge (just clearing the mark by a tenth), so this mark will make her a lot more confident of getting an Olympic invite.

Japan’s Kosuke Kitajima won the men’s 200 breast in 2:13.24. He’s at a very different point than his American competitors, but that’s still a pretty rough swim for him.

Cal commit Josh Prenot from the Santa Monica Swim Club was 5th in 2:14.48 – which is a best time for him.

Australia’s Bronte Barratt was almost as fast in this 400 free as she was at Australian Trials in March, with a 4:06.13 for a big win. She actually finished better than she did in Trials, with a closing split of 1:01.84. As a 200 freestyler, her opening half has always been better than her closing half, but this result shows she’s at least working on her closing speed.

The Terrapins Swim Team’s Chelsea Chenault took silver in 4:08.95. That missed her lifetime best that she swam in the prelims, but is the second-best time of her career. The high school junior plateaued last year, but is now well-back on track headed toward trials. The other Australian, Kylie Palmer (who was the champion at Trials ahead of Barratt) took 3rd in 4:09.79. That gap between Palmer and Barratt seems unusual, but Palmer’s time is right-on-par for a midseason swim for her.

New Zealand’s Lauren Boyle took 4th in 4:10.34. Canada’s Savannah King finally broke a self-declared “Santa Clara curse” by making the A-Final in this 400, and she swam well once there in 4:11.39. Word on the deck at UBC in Vancouver is that the Canadian Olympians have been swimming some absolutely soul-crushing workouts the past few weeks, so a 4:11 shows good resilience for her.

Two weeks down, and two 3:44’s for South Korea’s Tae-Hwan Park. He was a touch slower than last week, but swam a 3:44.96 to dominate the 400 free even against an outstanding field. That was five seconds better than his Australian training partner Ryan Napoleon in 3:49.79, and an even bigger gap between him and Ryan Cochrane in 3:50.56. With such a great field, we were hoping for better from Napoleon and Cochrane in pushing Park, but as it was the race wasn’t close after about the first 125 meters.

Few, if any, have swum times that good in back-to-back meets like this. In 2009, in polyurethane, Ous Mellouli did something similar with a 3:42 in June and a 3:41 in July, and that’s about the only quick turnaround on a 400 free that compares, though even those swims were more spaced out. Of course, that won’t count for much in London, as one big time is what’s going to win this race between him and Sun Yang – it looks like this is a two-man race at this point.

The top-finishing American was Matt McLean in 3:50.86. He was running down Cochrane as the two approached the wall, but came up just a few strokes short of a medal.

Dana Vollmer again showed some great consistency, with a 57.03 in the 100 fly final. That’s .04 faster than her time from prelims, and again broke the Meet Record. She improves her standing as the world #2 this year, and now is just a few-tenths behind Sweden’s Sarah Sjostrom.

Natalie Coughlin’s 58.44 was very similar to her 100 free, with more of a back-half swim than a front-half swim. Jasmine Tosky took 3rd in 59.63; she was very good at this meet last year as well, though the timing was a bit different (about 5 weeks out versus 3) as compared to this year.

Great Britain’s Ellen Gandy didn’t swim great in either prelims or finals, but was at least a bit better in the evening with a 1:00.34 for 11th overall.

The Japanese men took the top two spots in the 100 fly on Friday, with Takuro Fujii taking gold in 52.79. Takeshi Matsuda, the world’s fastest 200 butterflier this year, was 2nd in 52.84 – not surprisingly, he finished a little better than the sprinter Fujii.

Cal’s Tom Shields took 3rd in 53.02. That’s another good time for him, carrying over his momentum from the collegiate season.

Vollmer will be great at Trials. I hope she keeps something for the actual games – again, on the subject of Trials date being too close to the actual games: few have the luxury to just rest for Trials and taper for the games..This seems to be so detrimental to the athletes and their chance to make the team AND do well at the games.. Coughlin did’nt “attack” the wall at the 100 fly..still, she should be faster by now. I hope she hits taper! Park is one of the greatest out there. Again on the subject of his turns: Imagine what he could do if he had half a decent turn. Could someone out there, anyone, please, take him… Read more »

Totally agree with you about the trials so close to the olympic games. And Dana Vollmer is one the few american swimmers who can qualify without a big taper. If she swims 57 low in the 100 fly it will be enough to qualify and she will keep her best for the world record at the olympic games.
Agree with you about Tae-Hwan Park. He’s incredible on freestyle. He’s fast from the 50 free to the 1500 free. He will be very tough to beat this summer in the 200 free and in the 400 free.

Park is an outstanding swimmer on 400 …… Well mentioned NADADOR ! If he could have better turns , we could imagine him bringing fabulous times …

Mel’s interview with Dana is becoming fruition- she could be one of our most decorated athletes in London. 3 relays and possibly 3 individuals (the freestyles are still a stretch) could play out if all goes to plan in London.