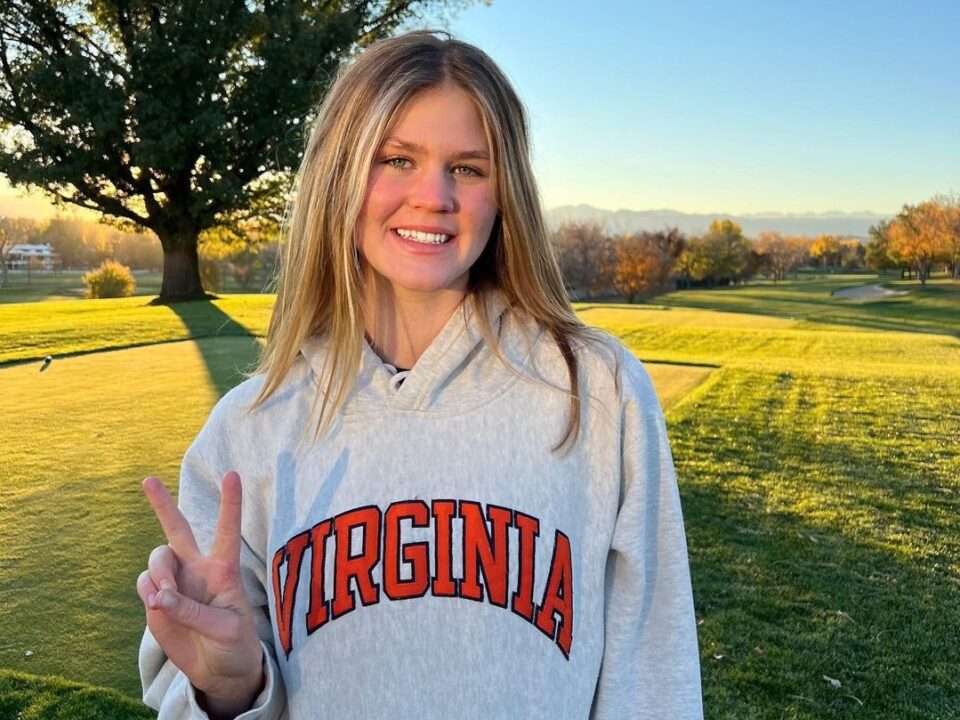 The rich get richer. #17 Charlotte Wilson is the fifth top-20 recruit from the class of 2024 to verbal to the University of Virginia.

The University of Virginia is on its way to putting together the top women’s college class of 2028 in the country, with fully 25% of the SwimSwam Way Too Early top-20 list committed to the Cavaliers thus far. The latest verbal pledge comes from #17 Charlotte Wilson of Englewood, Colorado, who announced her intention via social media:

“I could not be more excited to announce my commitment to continue my athletic and academic career at the University of Virginia! I would like to thank my family, friends, and coaches at TOPS for supporting me and helping me achieve this dream! GO HOOS!🧡💙⚔️”

In addition to Wilson, the Cavs have received verbal commitments from #2 Leah Hayes, #3 Anna Moesch, #9 Bailey Hartman, #12 Katie Christopherson, and “honorable mention” Aspen Gersper, effectively shutting down Florida and Stanford -and anyone else with aspirations to assemble the #1 2024 recruiting class- before the high school class of 2023 has even held Signing Day. That class represented a reversal of fortune for Virginia, who had topped the recruiting charts in each of the previous two years. The class of 2023 saw both Florida and Texas score 4 verbals each, while UVA had to settle for just two top-20 names.

Wilson will join the two-time defending NCAA champion in the fall of 2024.

Wilson’s commitment to the University of Virginia in spite of the fact that both of her parents are alumni of rivals University of North Carolina. Her dad, Kiely, played lacrosse at UNC, and her mom, Merel (Hommen) swam for the Tar Heels.

Her mom was a five-time individual Pennsylvania High School state champion in the mid-90s. At UNC, Merel was a two-time All-American and two-time ACC Champion in relays.

Wilson also took visits to the University of Florida and Stanford.

Welcome to the party, Charlotte. Did Mom or Dad swim at UVA?

did you read the article dude

It was added AFTER I posted, dude.

Congrats to Charlotte on her college commitment to UVa.

…and, plainly put, WOW this is a ridunkulous over the top great recruiting class for the Hoos. These are the good old days for DeSorbo & Co.