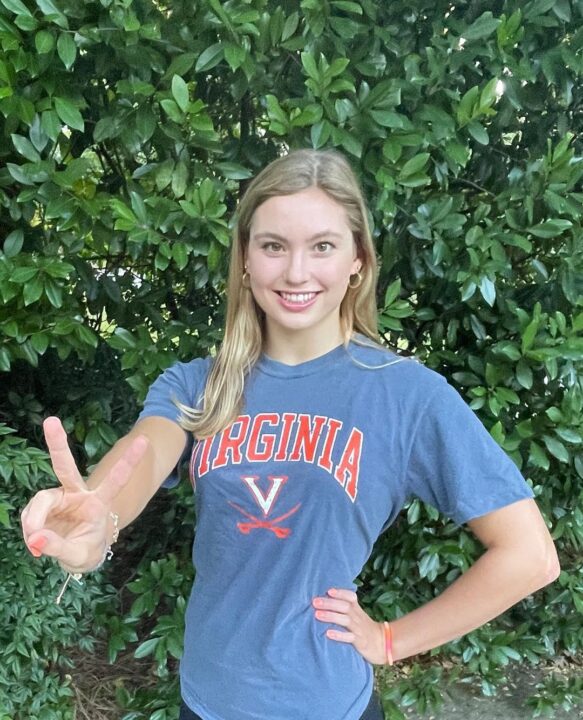 Katie Christopherson became the first top-20 recruit in the girls' class of 2024 to announce her college commitment on Thursday.

The defending NCAA Champion Virginia Cavaliers have broken the ice on the recruiting class of 2024 with the announcement of a commitment by Katie Cristopherson.

Christopherson, who trains with SwimAtlanta and Westminster Prep School in Atlanta, Georgia, is the 12th-ranked recruit in the high school class of 2024. She is also the first commitment in the class of 2024 for the two-time defending NCAA Champions in women’s swimming & diving.

While the 1A-5A championships are for Georgia’s smaller high schools, Christopherson had easily the fastest time in either of the state’s two championship meets. Her time in the 200 IM broke the high school state record that was held by 2-time US Olympian Kathleen Hersey for more than a decade.

As just a sophomore last season, she ranked 10th among high school swims in the 100 yard breaststroke, and 7th in the 200 IM.

Even with no 200 yard breaststroke at her high school championship last year, where she swam most of her season-best times, she still managed to knocked 10 seconds off her best time in that race. That matches a summer improvement of 10 seconds in long course that led her to a Junior National title in that event – and a 2:28 long course time that indicates she has an even bigger swim in the 200 yard breaststroker in her.

With two full seasons of development remaining before swimming her first college practice. Christopherson’s best times would have already put her in B-Finals at last year’s ACC Championship meet and be worth about 40 points individually.

Christopherson is the first girls commitment in the class of 2024 from among those ranked in SwimSwam’s top 20.