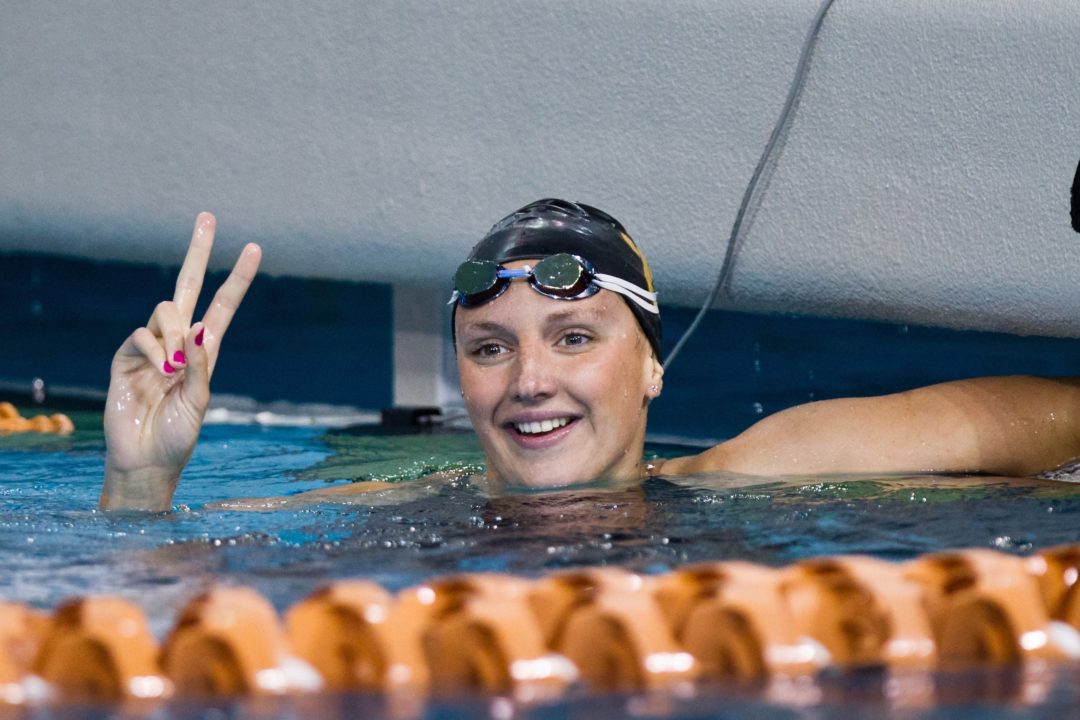 Following the Court of Arbitration for Sport’s decision, the 2021 European Short Course Swimming Championships will remain in Kazan, Russia.

The 2012 European Championships kicked off in Debrecen, Hungary on Monday, and despite a lightened field in the pool, the first day showed that there was still going to be an extremely fast, elite racing.

The women’s meet started off with the 400 IM final, which was loaded with highlights – not the least of which was Katinka Hosszu’s monster winning time of 4:33.76. That’s the third-fastest swim in her career, including behind a 4:32 she went shortly after the NCAA Championships in March.

Like we’ve seen from most of the elite IM’ers this year, she’s still tinkering with her pacing at this point of the season. As compared to March, she went out slower on her butterfly leg in this race (1:02.3 versus 1:01.8) but that didn’t translate into a better closing 100 free. I think we’ll see her attack the fly in London – but with two incredible swims already this season, she’s certainly bounced back from the summer of 2011 where she struggled.

Similarly, Hosszu’s teammate Zsu Jakabos put up her second very fast swim of 2012, and in fact knocked two seconds off of her lifetime best to take 2nd here in 4:35.68. She was actually faster than Hosszu through the first 200 meters, but Hosszu’s ability to put up very fast breaststrokes without sacrificing a ton of speed in the other 300 meters is part of what makes her so good in this event.

Those two are both already qualified for the Olympic Team, and so this seems to be putting both on sort of the end of a cycle. With another 9 weeks to go before London, that’s about right for them.

Sweden’s Stina Gardell, the heir apparent in the IM’s at USC to Hosszu, broke her own National Record in this race with a 4:38.46 for 4th. She knocked a second off in prelims, and then another second off in finals, meaning she’s broken that mark three times in her last two meets. Despite getting the record first in Mission Viejo, California a month ago, she still hasn’t officially been named to Sweden’s Olympic Team. This time moves her to 17th in the world in 2012, and should ramp-up the pressure to put her at the Olympics.

In the only other individual final of the session, Germany’s Paul Biedermann took his first ever European Long Course Championship in the 400 free, despite not being rested, in 3:47.84. He enters this meet as the back-to-back champion in the shorter 200, but he had never won this 400 despite being the World Record holder.

The mark is about a tenth faster than his swim from last week’s German Nationals, so it’s a good consistency swim for him. It also shows that he’s putting about the same focus on this meet – not much – as he did last week. Even during the polyurethane era, though, he was never much faster than this time at in-season meets.

Hungary’s Gergo Kis, who is a rising middle-to-distance swimmer, took 2nd in 3:48.09. That time positions him similarly to that of his Hungarian teammates – probably at the end of a cycle, but not a taper. This is only the second long-course meet we’ve seen him in since Worlds though, so it’s a good benchmark for his coaches and fans.

The German women topped the women’s 400 free relay in 3:37.98, led-off by a 54.21 from Britta Steffen, and perhaps more surprisingly, anchored by a 53.37 from Daniela Schreiber. That’s only two-tenths off of where she was at last year’s World Championships, when this same group (Steffen, Silke Lippok, Lisa Vitting, and Schreiber) won a bronze medal.

The Germans needed that anchor to fight-back against their neighbors the Swedes, who held a lead through three legs but fell back to 2nd in 3:38.40. Gabriella Fagundez had a good anchor for Sweden of 54.62 but not good enough to fight off Schrebier.

Sweden’s middle two legs of Michelle Coleman and Sarah Sjostrom were awesome – with matching 54.0’s. If they had Therese Alshammar on the lead-off leg instead of Ida Marko-Varga (55.66) like they probably will at the Olympics, then they would have knocked off the bronze medalists. That’s a confidence builder for a group that didn’t final at Worlds after swimming alternates in the prelims. Marko-Varga did swim well though for her, and that’s still important for their ability to maybe rest a star or two in London.

Bousquet won’t be on this relay at the Olympics, but at these championships is pulling some fill-in duty beyond his official 50-fly entry. So far, that’s a good swim for him given the tweak he gave to his ribs in Charlotte.

Italy was 2nd in 3:14.71, including a 47.97 anchor from Filippo Magnini. This too wasn’t a compete Olympic relay for them, but their question mark has been how long the 30-year old Magnini can remain an elite anchor. The answer seems to be “at least one more year”.

The Russians were 3rd in 3:15.13, which is a great swim for a full-blown B-relay. That includes a second leg from Oleg Tikhobaev in 48.01; though it was on a relay start, that time is still a second-and-a-half faster than he’s ever been on a flat start.

What’s the use of these european championships two months before the olympic games? I don’t know because many big swimmers are not fully tapered and the others are not there.
It was a good and logical win for my country France in the men’s 4X100 free relay. You put Yannick Agnel and Fabien Gilot who are not at these championships in this relay and it will be very fast. Australia vs USA vs France. It might be a good race.
And great time for Katinka Hosszu in the 400 IM but USC swimmers as usual swim fast in almost every meet so for me there’s no big indication of a possible monster time from her at the olympic games.

Bobo is right!! What’s the point of any meet other than the olympics? And once you’re at the olympics, what good are you if you don’t win a gold?

Oh wait, that’s not the point of swimming at all. The point is being your own personal best. I really don’t think the timing of this meet will affect the preparation of these Olympians and for those who are at Europeans and not going to the olympics, they are probably thrill to be there.

I don’t deny the use for the young swimmers or for the swimmers who will not be at the olympic games. It’s always great to represent his country and to try to break his records. I just asked the question for the big names. They are not there (Yannick Agnel didn’t want to waste a full week, he’s only focused on training like many others) or they are there but untapered. And to watch a win in the men’s 400 free in 3.47.84 isn’t very interesting.