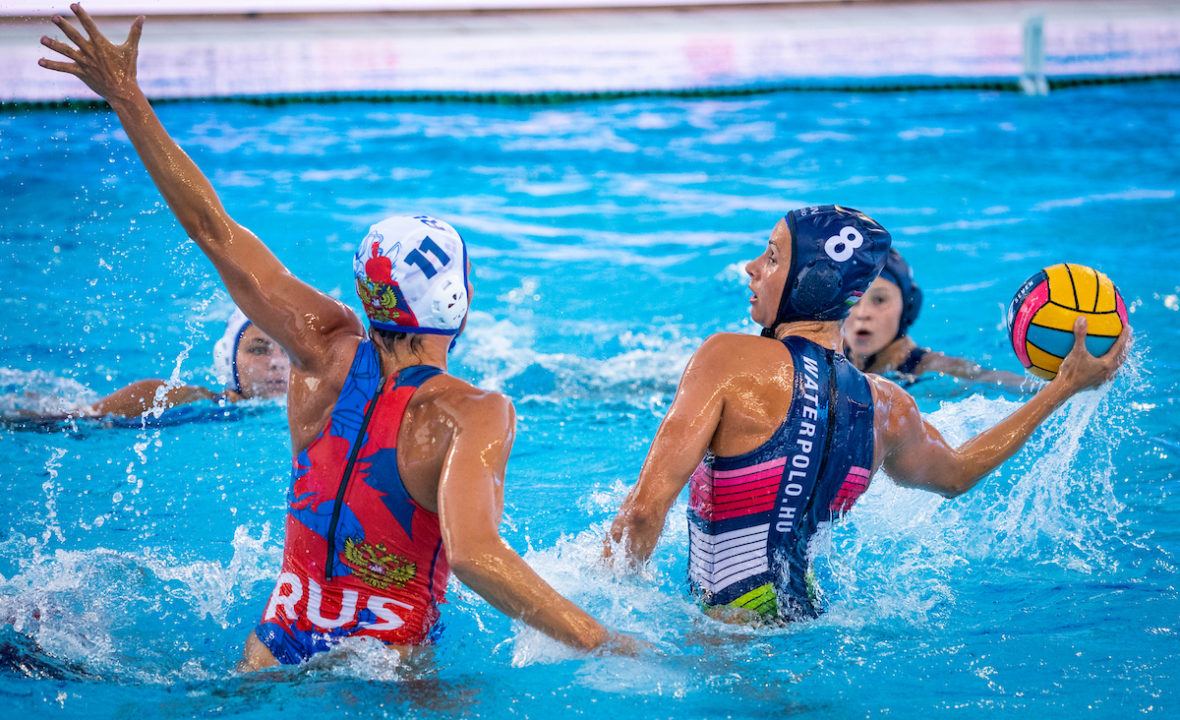 The Americans made quick work of China (21-6) to move to 4-0 on the week, while Italy bested Canada 15-10 to stay perfect. The Dutch squeaked past Hungary 12-10, while Russia held off a late Australian charge for a 9-8 victory.

The USA will face Netherlands in the first semifinal match, while Russia takes on Italy in the last match of the day. Classification games for fifth through eighth place also will be played on Saturday.

In the closest game of the day, Russia and Australia were tied 4-all at halftime, before the Russians pulled away with a three-goal third quarter. The Aussies put in four goals in the fourth stanza, but Russia managed two to hang on for the victory.

Russia led 3-1 after the opening stanza, thanks to a pair of Prokofyeva putaways. Australia meanwhile scored on a Webster penalty (5:57).

The Aussies turned the tables with a 3-1 goal advantage in the second quarter, knotting the score.

Leading 7-4 after the third period, Russia got key goals from Maria Bersneva and Prokofieva down the stretch. Keesja Gofer and Webster countered for the Australia and Morgan Baxter pulled the team within one with 42 seconds left, but the Aussies came up just short in the comeback bid.

“We have just had a really a tough match, and I am very happy about the result,” Russia coach Andrey Belofastov said. “We have passed to the semi-final, which goes in line with our ambitious plans for the trip.
We have played with all our might against the Australians. We reached a good figure of 12 turnovers, which is really good. The girls have given all their strength and emotions, however could not keep a solid lead. Especially hard turned out to be the last quarter, where we had 3 exclusions and 3 of our lead players have been out of the game. We expect a lot of fighting at the semi-final against Italy. The match will be very hard and very exciting as well.”

The Italians broke away and claimed their spot in the semifinals, pouring in 10 goals over the final two periods against Canada on Friday. Leading just 5-4 at halftime, Italy put in six goals in the third and four in the fourth to counter three Canadian scores in each stanza.

Arianna Garibotti and Roberta Bianconi were the difference makers for Italy, finding the back of the net four times apiece, while Silvia Avegno and Elisa Quierolo each managed two scores.

The Italians jumped ahead 3-0, including two scores by Garibotti, but Canada countered to bring it level at the end of the first quarter.

Bianconi gave Italy a little cushion with her second goal of the game, to put the team up 7-5, and the Italians never looked back.

“Today the key for the success was our teamwork,” Bianconi said. “It was fantastic to see that we could help each other in every situation. I am glad that I was able to score 6 goals two days ago, but I do not really care about the individual achievements. I shall not be disappointed if I score no goals tomorrow and my team wins.”

A four-goal second quarter put the Dutch up 6-3, giving them enough cushion to withstand a seven-goal charge by the homestanding Hungarians over the final two periods.

The Hungarians scored the first two goals care of Gabriella Czucs and Gyongyossy, but Megens and Sevenich evened the score at 2-all.

The Dutch soon grabbed a 6-3 lead, but Hungary never gave up pulling within one at 9-8, before eventually succumbing to the European champions.

“It was a really tough match,” Dutch coach Arno Havenga said. “We played against a very good team in its hometown. I think we played well and the match could be regarded so far as the best game for us in Budapest. It was a good experience, and it was quite interesting to compete this uneasy opponent. To get ready for the next challenges we shall have to improve a few things.”

The result was never in doubt for the Americans as they quickly went up 6-1 and poured on six goals in the second and five goals in the third quarter before closing out the win with three more insurance scores.

Aria Fischer netted five goals for Team USA to lead all scorers, while Stephanie Haralabidis added four and Maggie Steffens managed a hat trick. Maddie Musselman, Melissa Seidemann and Rachel Fattal chipped in two goals apiece. Nine players found the back of the net for the American side.

The United States opened the game with five straight scores, including a goal by Musselman on the team’s first shot of the game. Zhang converted a 5-meter opportunity to put China on the board, only to see Haralabidis respond to end the stanza.

The offensive onslaught continued in the second and third quarters, before China managed four goal to Team USA’s three in the final stanza.

“It was easier than we expected,” Team USA coach Adam Krikorian said. “China can play a lot better water polo than they did today. I am happy with our performance.

“I am excited about tomorrow’s match, I think it will be the best match of the tournament as we are facing a really strong Dutch team. I can say only positive things about our future opponents, they have good shooters, good defenders, good goalkeepers and a really good coaching staff.”