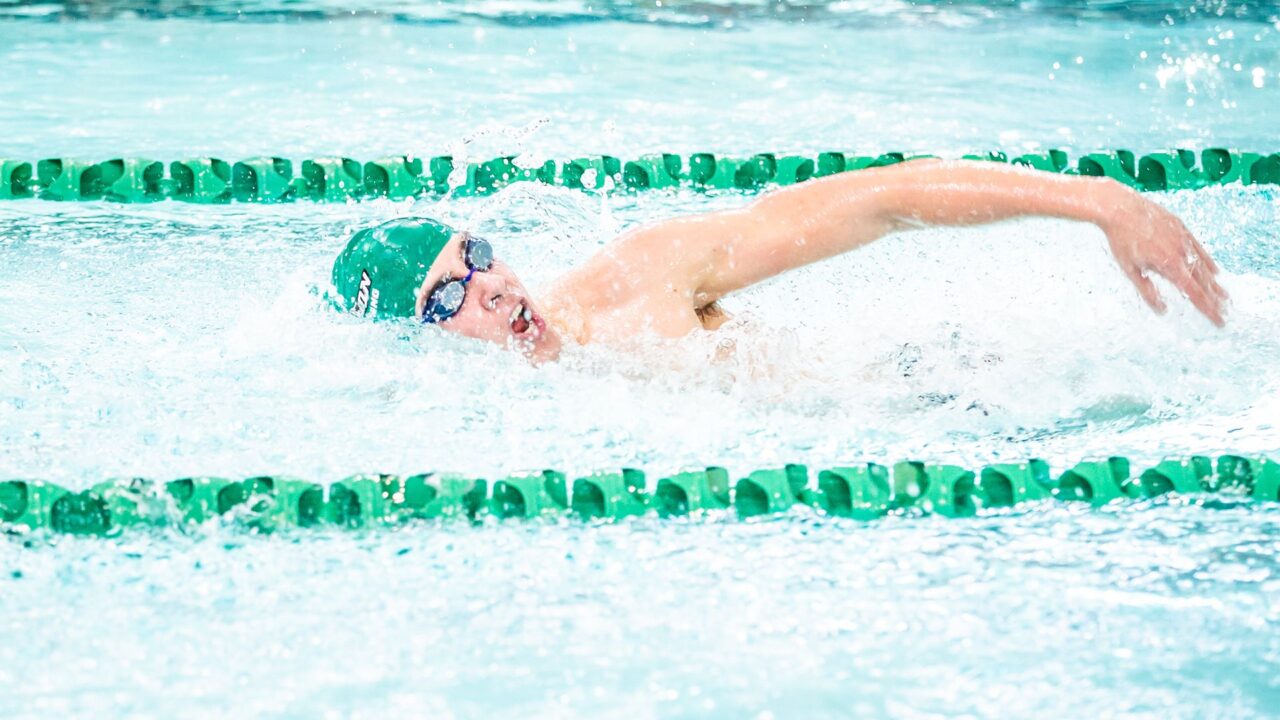 The Bearcats won 172.5-127.5 in their first win over the Minutemen in 10 tries. Current photo via Binghamton Athletics

AMHERST, Mass. – The University of Massachusetts swimming and diving team hosted its first home meet of the season on Saturday, highlighted by the women’s 200-yard Medley Relay team of Megan Mitchell, Maggie Desmond, Summer Pierce, and Caroline Mahoney setting a pool record. Megan Mitchell also set the pool record in the 200-yard backstroke. Andrew Bell and Emma Petrovich won both the Men’s and Women’s 1m and 3m diving competitions, respectively. Bell posted a No. 3 all-time score in the 3m and a No. 5 all-time score in the 1m, while both Bell and Petrovich made NCAA Zone Cuts in the 3m dive.

Noah Witt won the 200-yard backstroke in 1:54.04 and Eric Eastham claimed second (1:55.67). Witt also earned second place in the 100-yard backstroke with a time of 51.67 seconds, with teammate Beau Bengston following closely behind, finishing the race in 52.82 seconds. Jamie MacDonald and Jake Bailey swam the 200-yard butterfly in 1:54.63 and 1:56.91, respectively, good for second and third place.

Next Up
UMass returns to the pool on Saturday, Jan. 7 at 1 p.m. for a meet at Bryant.

AMHERST, Mass. – The Binghamton men’s swimming & diving team closed out the fall semester with an impressive performance in a dual meet at UMass on Saturday afternoon. The Bearcats won 172.5-127.5 in their first win over the Minutemen in 10 tries. In the women’s competition, Binghamton was defeated by UMass 228-72 and Vermont 200-100.

In the women’s events, junior Courtney Moane was second in both the 100 breast (1:06.69) and the 200 breast (2:26.84). She was also part of the second-place 200 medley relay team that included freshmen Olivia Philbrick and Maria Pignatelli as well as junior Molly Greeley. The Bearcat quartet finished with a time of 1:48.64.

Binghamton now turns its attention to 2023, with its first meet at home against St. Bonaventure on Saturday, Jan. 21.

COACH’S QUOTE
“It was great to get to compete again today,” said Head Coach Gerry Cournoyer. “I am really pleased to see some more growth and development from our athletes.”

UP NEXT
Following the Catamounts dual meet at UMass UVM will travel to Loudonville, N.Y. where they will take on Siena in their final road meet of the season on Sunday, January 15. The start time for that meet is scheduled for 1 p.m.