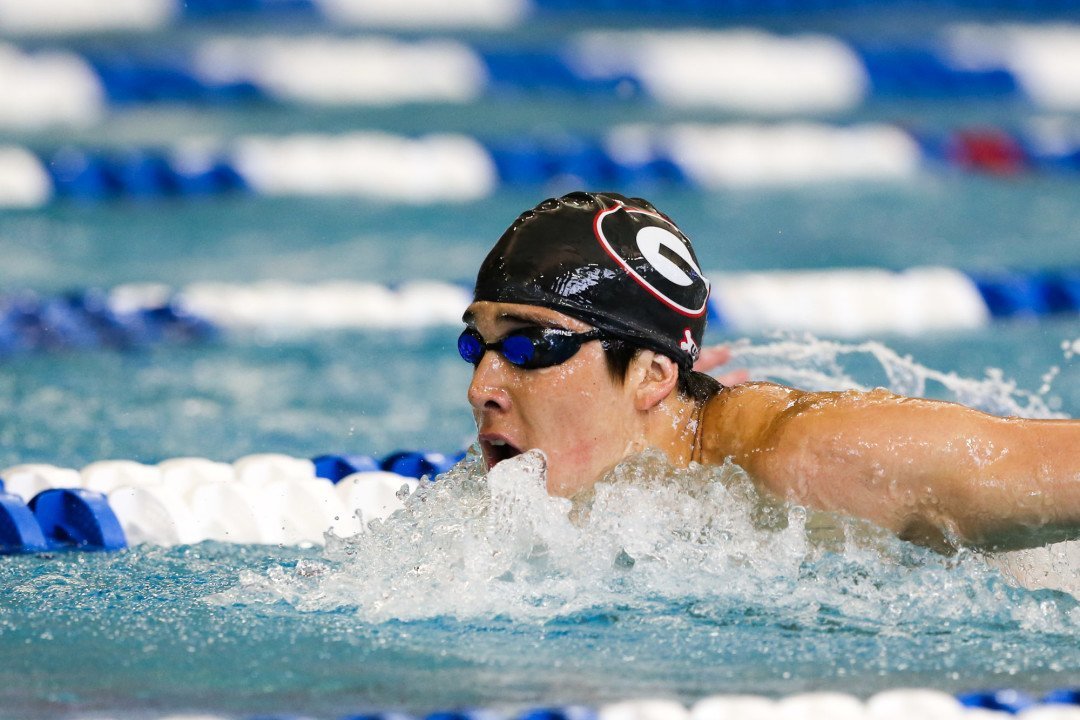 The University of Georgia men's and women's teams emerged victorious against the North Carolina Tar Heels in both teams' first dual meet of the season. Current photo via Tim Binning/TheSwimPictures.com

Conable’s commitment to Marist will add mid-distance depth to a team entering the 21-22 season sans coach Larry VanWagner for the first time in 45 years.

This meet was fast, which is perhaps to be expected in an early fall meet following an Olympic summer.

The Georgia men’s team, on the other hand, won by just 30 points (after winning last year’s dual by 45 points), although they swam the last two events as exhibition.

The Lady Tar Heels, however, scored big individual wins with Caroline Baldwin in the 50 free (22.73) and Hellen Moffitt in the 100 back (53.08). Elissa Dawson also swept both the 3-meter and 1-meter diving for North Carolina.

The UNC men notched individual victories of their own with Craig Emslie in the 100 breast (55.85) and Jordan Merrilees in the 500 free (4:29.35). Merrilees was also second in the 200 free behind Kalisz in 1:37.15. Notably, UNC again swept both diving events with Sean Burston in the one-meter and Jack Nyquist in the three-meter.

The Bulldogs and Lady Bulldogs will next face the Florida Gators at home in Athens, Georgia, on Friday, October 28th. The Tar Heels will travel to face another SEC team, the Tennessee Volunteers, on October 21st and 22nd in Knoxville.

“I was extremely pleased with the way we competed and performed today,” Bauerle said. “They did a good job for the first meet. North Carolina always gives us a tough test and that’s why we like racing them first. This meet always gives our kids a sense of focus.”

Olympian Chantal Van Landeghem returned from a redshirt campaign and won the 100 freestyle with a time of 49.96. Meaghan Raab claimed the 200 freestyle in 1:47.87 and Meryn McCann made her Georgia debut by taking the 200 backstroke in 1:57.87.

The 200 medley relay of Kylie Stewart, Cameron, Kingsley and Van Landeghem won with a time of 1:40.13.

Georgia will return to action Oct. 28 at Gabrielsen Natatorium when it entertains Florida at 11 a.m.

CHAPEL HILL, N.C. – North Carolina kicked off the 2016-17 dual meet season on Friday afternoon, taking on national powerhouse Georgia in Koury Natatorium. The Bulldogs swept the Tar Heels, defeating the women, 179-119, and the Tar Heel men fell, 162.5-132.5. The meet was highlighted by standout performances by the men’s and women’s divers, and winning swims by Craig Emslie, Jorden Merrilees, Hellen Moffitt and Caroline Baldwin.

“I think the takeaway is what we saw and what we competed against. We competed against a national championship winning women’s team and a Top 5 men’s program. Clearly we have some work to do to get to that level. But overall hats off to them,” said UNC head coach Rich DeSelm.  “If you’re an observer of the sport you are going to see what champions do. And there are some Olympians on that team, some Olympic medalists, and I think it is good that we can race against them and really learn from them.”

The matchup proved to be an early test of conditioning for the Tar Heels, as the Georgia women captured their seventh national title in 2016, while the men’s team placed fifth at the NCAA Championships.

The UNC men placed first in five events, while the women’s team earned the top spot in four events.

The women’s team began the home opener with a second-place finish in the 200-yard medley relay, clocking in at 1:40.39. Georgia’s Chantal Van Landeghem narrowly outtouched Sarah Hitchens to take first place for the Bulldogs. UNC capped off the meet by winning the 400-yard medley in a time of 3:24.14 with Baldwin, Hitchens, Moffitt and Brooke Bauer swimming for North Carolina.

On the men’s side, North Carolina began the competition with a third-place finish in the 200-yard medley relay. The Tar Heels clocked in at 1:32.11 with Heyward Harrison, Emslie, Michael Meyer and Greg Brocato swimming for the Tar Heels. The Tar Heel men concluded the meet with a first place finish in the 400-yard medley relay, touching the wall at 3:00.71.  That relay include Merrilees, Emslie, Philip Perdue and Lucas Popp.

Sean Burston finished first in the one-meter diving competition for the Tar Heels, with a score of 361.05. Jack Nyquist posted a score of 343.05 to capture second place. On the three-meter boards, Nyquist took the top place for North Carolina with a score of 416.33.

Junior transfer Emslie got off to a fast start in his debut in the pool as a Tar Heel, earning first place in the 100-yard breaststroke with a time of 55.58. Merrilees also had a successful first meet for UNC, placing first in the 500-yard freestyle (4:29.35) and second in the 200-yard free (1:37.15).  Emslie is a transfer from Indian River State College in Florida while Merrilees is transfer from Oakland University.

“It was good day to be a Tar Heel as this was my first meet,” says Merrilees.  “Coach (DeSelm) talked a lot about culture before the meet today and I think that means bringing a lot of energy into our training which will then carry over to our meets like it did today.”

“Moving forward we are going to race tomorrow in practice. We are going to clean up the splits, the relay turnarounds, and just see where we are as a group. They are going to come in this weekend and work,” says DeSelm.

North Carolina will return to the pool on Friday, Oct. 21-22, as the Tar Heels travel to Knoxville, Tenn., to take on the nationally-ranked Tennessee Volunteers in a two-day dual meet. Competition will begin at 4 p.m. on Friday and resume on Saturday morning at 10 a.m.

Megan Kingsley throwing down a 1:54 200 fly in early October? Boss

Just curious, why is Smoliga redshirting?

May be focusing on just long course? Just a guess.

where are you getting your intel? i would say school or sick or injured.

She injured her tailbone