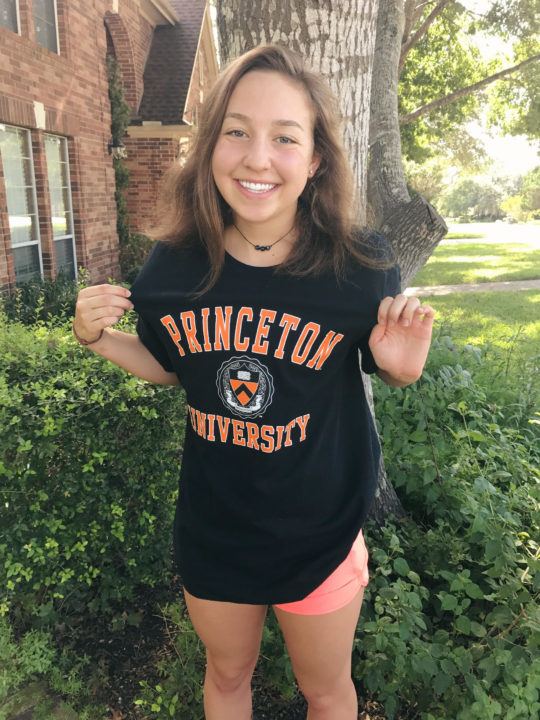 Junior National silver medalist and #20-ranked recruit Regan Barney has rescinded her commitment to the University of Georgia and has instead verbally committed to begin the application process with Princeton.

Junior National silver medalist and #20-ranked recruit Regan Barney has rescinded her commitment to the University of Georgia and has instead verbally committed to begin the application process with Princeton.

Barney was the first of our top 20 NCAA prospects in the high school class of 2017 off the board, committing to Georgia way back in May. But she’ll no longer become a Bulldog in the SEC, instead opting for Princeton University and the Ivy League.

Recruiting in the Ivy League is a bit different, with committed swimmers still required to complete the admission process, which will be Barney’s next steps in the process.

“I am so excited to be a part of such a wonderful team!” Barney told SwimSwam. “There’s no doubt in my mind that at Princeton, I will be able to excel in the classroom and in the pool. I am confident that the support from Coach Teeter and Coach Suzanne, as well as my teammates, will help me improve athletically and academically. Thank you to everyone who has supported me over all these years and Go Tigers!!”

Barney checked in at #20 on our ranking of the top domestic recruits in her class, mostly on the strength of her 4:10.99 400 IM, which puts her just outside of NCAA scoring range with a year of high school yet to go. Barney is also a rangy freestyler and very good through the 200s of most strokes. She currently competes for Longhorn Aquatics in Texas, but has also swum for Nitro Swimming in the past.

Nice to see a student put her education first , although Georgia is a fine school obviously an Ivy League education is something few have the opportunity to obtain , congrats !!!

Not always an easy decision: education first or swimming first. Ideally, you can do both.

Good academically, but not a program known for developing talent

They’ve had some good swimmers. Plus, a Princeton education will be great for her future. Sometimes it’s about the whole person.

“Good” academically? If you’re referring to Princeton, I’d like to hear what your “outstanding” is.

I went to Columbia 🙂 go lions.

I think everyone would agree Princeton>Columbia

Except the year Jason Garret was QB

apparently not the Wall Street journal…

Not known for it, but I wouldn’t be surprised if they do an exceptional job developing her.