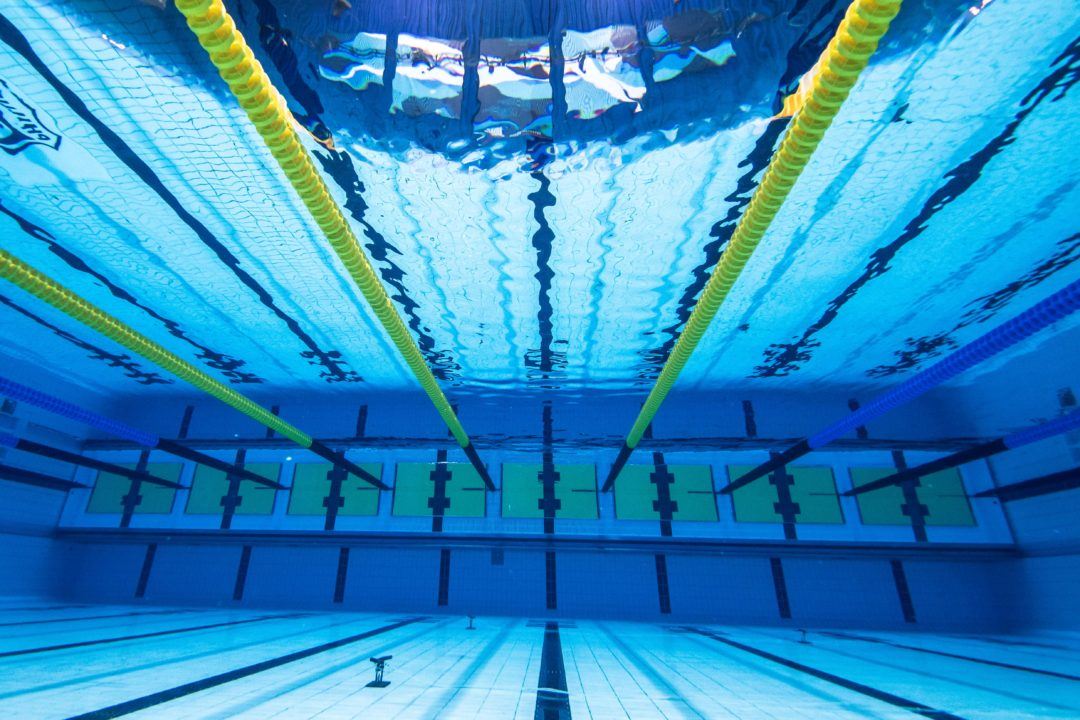 The UC Davis women remain undefeated as they took down Fresno State to celebrate senior day at home. They now have an 8-0 record. Stock photo via Mike Lewis/Ola Vista Photography

Davis, Calif. – Strong sprints and relays along with yet another large chunk of points from UC Davis divers led the Aggies to a 172-128 win over visiting Fresno State on Saturday afternoon at Schaal Aquatic Center.

The Senior Day win was the Aggies’ first in a head-to-head dual this season and keeps the program unbeaten against Fresno State since the Bulldogs reinstated swimming in 2008. UC Davis is a perfect 8-0 in that span with Saturday’s margin of victory the highest since a 160-132 win in 2016. The Aggies also won in an identical 172-128 in 2014.

Though UC Davis placed at least one swimmer in the top three of every event on Saturday, it was the sprint frees and relays where the Aggies picked up large chunks of points.

Mia Cunnan led a charge that saw four Aggies in the top five of the 50 Free, winning in 23.80 with Mia Facey (24.21), Kyla Leacox (24.49) and Jamie Pincin (24.50) following in third through fifth. Swimming out of lane eight, Cunnan’s time was just off her season best of 23.79 set at the Phill Hansel Invitational in Houston on November 21 and the fastest by an Aggie in that event since then.

In a meet that’s point spread rarely grew beyond 20 points in favor of UC Davis, the Aggies hung tough in the second half of the meet to keep the Bulldogs at arm’s length.

Following the Aggies’ 100 Free dominance, Cunnan, Julie Kwan and Olivia Greenberg minimized the damage of a Fresno State win in the 200 Back by going 2-3-4. Rachel Pride and Kyla Leacox picked up valuable points in the 200 Breast going 3-4 and Smith, Bockman and Malloy teamed again in the 500 Free to negate another Fresno State win by going 2-3-5.

Jay Jay Eaton and Leacox posted big late wins in the 100 Fly and 200 IM respectively to further widen the scoring gap and UC Davis’ 400 Free Relay ‘A’ team of Pincin, Facey, Smith and Cunnan posted a three-second win in the final pool event of the day. Their winning 3:29.41 was the fastest Aggie relay team since the final day of the Phill Hansel Invitational on November 23rd.

UC Davis’ 200 Medley Relay team of Ashleen O’Brien, Facey, Eaton and Cunnan also opened the meet winning in 1:44.26. Just as important in the relays were the Aggies’ ‘B’ teams topping Fresno State’s second teams to pick up additional points in those races.

Aggie divers continued to be a source of continued scoring strength for the team as Sydney Wren’s 298.05 win on the 3-meter board led a total of 15 points in that event. Wren has now set the top two team marks on the 3-meter board in consecutive weeks after scoring 313.25 against UC Santa Barbara last Saturday.

UC Davis will wrap up the dual season next weekend on February 1 at Pacific after which championship tapers will be in full effect for the MPSF Championships February 19-22.

Complete results from Saturday can be found here or by visiting the swimming and diving schedule page at ucdavisaggies.com.

ABOUT UC DAVIS
Providing a small-town community feel while providing a world-class academic experience, UC Davis is home to more than 37,000 students and centrally located between San Francisco, Lake Tahoe, and the Napa Valley. The No. 5-ranked public university in the nation according to the Wall Street Journal and Times Higher Education, and among the top 15 public universities nationwide according to U.S. News and World Report, UC Davis offers nearly 100 graduate programs and more than 100 academic majors across four colleges and six professional schools, ranking among the world and nation’s best in numerous disciplines, including veterinary science, agriculture, and plant and animal programs.

MARYA WELCH INITIATIVE
Named after the former physical education instructor, coach and Dean of Women who founded women’s sports on the campus 25 years before the passage of Title IX, the Marya Welch Initiative for Women’s Athletics provides comprehensive support for UC Davis’ 16 women’s athletics programs. Through the support of the Marya Welch Initiative and its group members, student-athletes are provided the best possible opportunity to succeed inside the classroom, and in competition, through special project gifts and by increasing visibility and participation at women’s events throughout the year. All gifts to the Marya Welch Initiative are matched 1:1, doubling the impact on our women’s programs. Visit https://give.ucdavis.edu/ATHG/324041 for more information.

DAVIS, Calif. – The Fresno State swimming and diving team fell to UC Davis 172-128 on the road, on Saturday afternoon.

The Bulldogs fall to 4-2 on the season.

Fresno State managed to take the top spot in seven events, and Irina Nikolaeva finished first on the 1-Meter.

What’s next – Fresno State will return home on Saturday, Feb. 1 for Senior Day at 12 p.m. PT at the Fresno State Aquatics Center. Admission to all Fresno State swimming and diving meets are free of charge.

“Fresno State Athletics: The Pride of the Valley” – The Bulldog Foundation creates championship experiences for Fresno State student-athletes as they strive for excellence in the classroom, in competition, and in life. To become a BDF member, please visit bulldogfoundation.org.