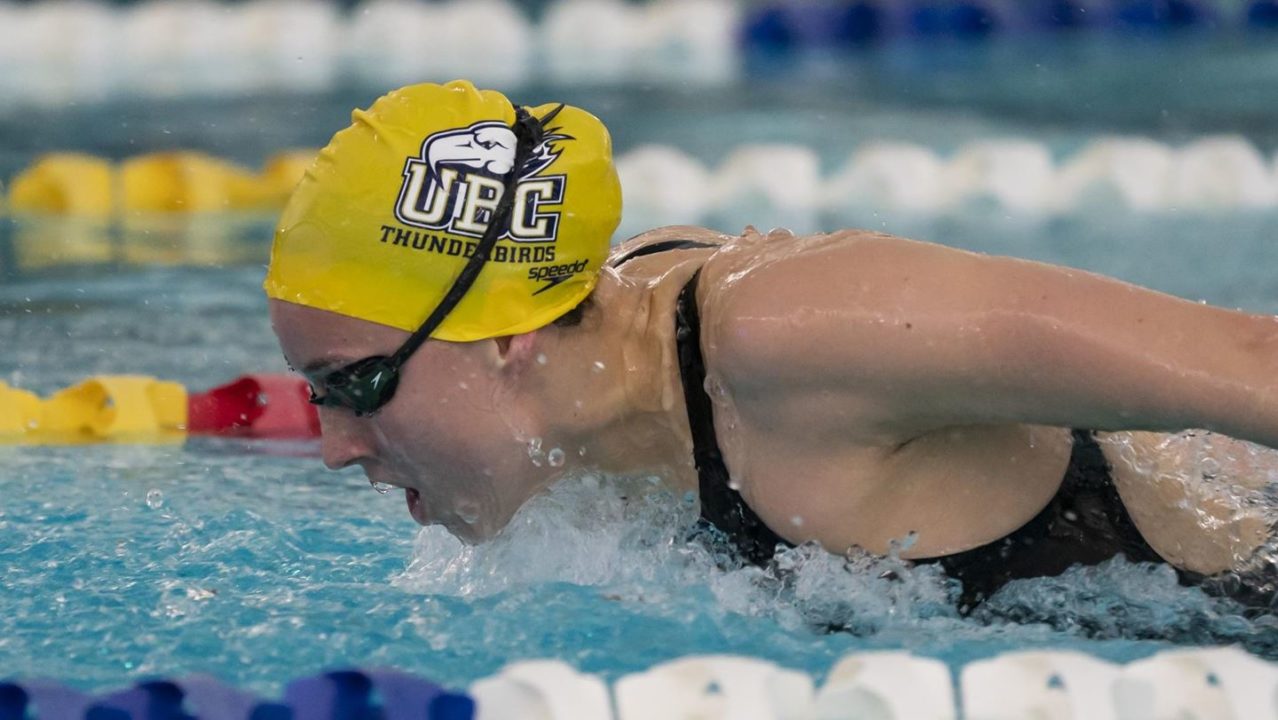 The 13 newest T-Birds have already joined their returning teammates in the pool in preparation for their first official competition in late October. Current photo via University of British Columbia Athletics, Rich Lam

Vancouver, British Columbia – The much celebrated UBC Thunderbirds swimming program is looking forward to welcoming a standout group of recruits for the 2019-20 season. The program maintained its impressive winning tradition last season as both the women’s and men’s teams successfully defended their Canada West and U Sports titles. The season culminated in style, in the friendly waters of the UBC aquatic center this past February, where both squads claimed their respective national titles, each for a third consecutive season.

A total of 13 new recruits will now call the state of the art UBC Aquatic Centre their second home with guidance from UBC swimming coach Stephen Price and assistant coach Derrick Schoof. Price enters his ninth season in charge and has helped fill the ‘Birds trophy case during his tenure, leading the women’s team to seven national championships in that span while helping the men’s team earn five national titles. Six swimmers will join the storied women’s team that earned a 23rd national championship title in 2018-19, the program’s seventh in the past eight years while seven student athletes will join the men’s team who’ve captured four national titles in the past five years.

T-Birds assistant coach Derrick Schoof enters his third season in a full-time capacity and is coming off a busy summer where was also in charge of Canada’s swim team for the FISU games in Italy. Schoof is eager to work with the latest crop of T-Bird talent, looking to prepare them for both local and international competition.

“We are really excited to be welcoming six women and seven men to the team next year as we work towards our quest of repeating as National Champions for four straight years.  Being that it is the Olympic year coming up, we will really be focusing our efforts on placing T-Birds onto the Olympic Team as well.”

The women’s team will welcome local product Sophia Brunoro from Burnaby, B.C., a graduate of Burnaby Mountain Secondary School who swam with the Chena swim club based out of North Vancouver. Sophia will study Science in the classroom at UBC while in the pool, she’ll specialize in distance freestyle individual medley events.

Josie Field from Langley, B.C. graduates to UBC from Langley Fundamental Secondary school and swam locally for the Langley Olympians swim club. Josie will study Science as a T-Bird and focus on the Butterfly in competition.

Oriane Guillot joins the UBC family from across the water in Hong Kong. Oriane will study Arts and specialize in the Butterfly with the ‘Birds.

Sara Godon makes the trip out west as a transfer from the Ottawa GGs program. The 5’10” native of Quebec is a former member of Team Quebec and a four-time medalist at the RESQ University Championships. Sara will be studying Science while excelling in Freestyle events with the blue and gold.

Anna Dumont is another lower mainland talent out of Sardis, B.C. where she competed for the Spartan swim club based out of Chilliwack, B.C. Anna will study Kinesiology at UBC and take part in Freestyle events for the T-Birds.

Angela Saarloos joins the T-Birds from Mississauga, Ontario and will study Arts at UBC while focusing on the breaststroke and Freestyle events in the pool.

The seven student athletes that will join the T-Birds men’s squad are as follows.

Bar Nyof joins the ‘Birds from back east, the 6’3″ native out of Mississauga Secondary School most recently swam for the Cobra swim club and recently boasted a fifth-place finish in the 200m backstroke at the Ontario Junior International. Bar will be studying Applied Science at UBC and specializes in the breaststroke.

Art Sarloos also joins the T-Birds from Mississauga Ont. Where he attended Silverthorn Collegiate Institute. The 6’0″ Sarloos will study Arts at UBC and focus on the backstroke and freestyle events in the pool.

Mathew Meuleman is a 6’3″ local product out of JN Burnett Secondary School in Richmond, B.C. where he swam for the Richmond Rapids swim club. Meuleman will study Arts at UBC.

Raben Dommann is a 6’3″ North Shore product who was born in Johannesburg, South Africa and grew up in North Vancouver, B.C. where he was a standout in Freestyle events for the Chena Swim Club. Dommann is a graduate of Sentinel Secondary School and will focus on Sciences at UBC, he enjoyed an eventful summer where he finished 16th in the 5km open water race at the 2019 FINA world championship.

Brayden Hemeon joins the T-Birds following some time spent at Evan Hardy Collegiate Institute where he exceled at the breastroke and individual medley races. Brayden will study Sciences at UBC.

Mathew Crawford is another Richmond B.C. product who swam for the Rapids swim club. The 6’3″ graduate of JN Burnett Secondary will study Arts at UBC and excels in the backstroke.

Sehajvir Singh rounds out the T-Birds men’s team recruits, the 6’0″ native of New Westminster swims middle and distance freestyle events and will study Arts at UBC.

The newest T-Birds have already joined their returning teammates in the pool for some pre-season training sessions in preparation for their first official competition in blue and gold in late October. The ‘Birds will cross the water to Vancouver Island for the Swim B.C. Senior Circuit No. 1 at Saanich Commonwealth Place in Victoria, B.C. on Saturday, October 19. It promises to be another exciting season for the ‘Birds as they go in search for their fourth straight men’s and women’s national championship titles.

Way to load up both teams!