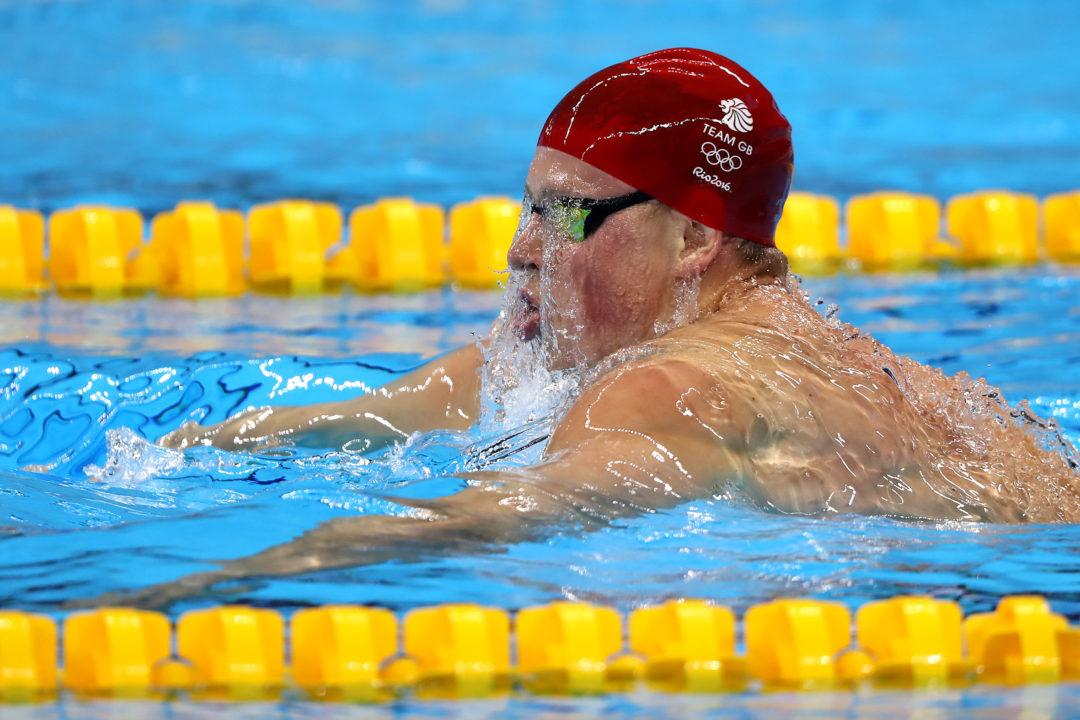 Adam Peaty and a strong British team will descend upon Indianapolis this weekend for the second stop on the 2017 Arena Pro Swim Series. Peaty, the world record holder in the 100 breaststroke, could lower the U.S. Open Record in the 100 breast. Current photo via Simone Castrovillari

Adam Peaty and the British are coming to Indianapolis for this weekend’s upcoming stop on the Arena Pro Swim Series, and the small squad of Britons led by Peaty could emerge the most successful international delegation by the time the meet wraps up Saturday night.

Peaty, the world record holder in both the 50 and 100 LCM breaststrokes, will swim his signature 100 breast in Indy, facing off for the first time since Rio with American Record holder Cody Miller (58.87) and U.S. Open Record holder Kevin Cordes (58.94).  Cordes’ U.S. Open Record time of 58.94 was set in the semifinals of the 2016 U.S. Olympic Trials in Omaha, Nebraska, but is in serious peril of being lowered by Peaty.

Editor’s Note: The U.S. Open Record is the fastest time swum on American soil by a swimmer of any nationality. Some countries refer to it as an “All Comers’ record.”

In Rio, Peaty blew away the field and demolished his own world record in the 100 breast, finishing in a mind-boggling 57.13 seconds. Though Peaty has dipped under the 58-second barrier on numerous occasions it is unlikely he will be that fast this weekend.  However, he does not need to break 58 seconds to lower Cordes’ U.S. Open Record.  All Adam Peaty needs to do to erase Cordes’ record is swim exactly like he did just one month ago in Luxemborg at the 19th Luxemborg Euro Meet.  In Luxemborg Peaty blew away the competition to win the 100 breaststroke in a 58.94, a swim that would exactly tie Cordes’ record.

Peaty will also contest the 200 breast where he will square off against fellow countrymen Murdoch and Willis once again, as well as Americans Cordes, Miller, and American and U.S. Open Record holder Josh Prenot.  Prenot, the Olympic silver medalist in the 200 breast in Rio, came very close to breaking the former world record at U.S. Olympic Trials, only missing it by some 16 one-hundredths of a second.  Recently the world record was lowered to a 2:06.67 by Japan’s Ippei Watanabe, though world records are not usually in serious danger during meets like the Arena PSS–unless Katie Ledecky shows up.

Notably absent from the breaststroke and IM’s this weekend are Texas’ Will Licon and Emory’s Andrew Wilson, both of whom are currently prepping for their final NCAA Championships in March.  Though both men narrowly missed making the team in Rio, the times they swam at U.S. Olympic Trials would have made them competitive in Rio.

Peaty will also be swimming the 50 and 200 freestyles in Indy, giving the American audience perhaps their first opportunity to see him swim something other than breaststroke.  While Peaty’s seed times in the 50 and 200 frees are probably not indicative of what he is actually capable of, the amount of time he would need to drop to come even close to the U.S. Open Records in either race is out of the question.

Additionally, Penny Oleksiak, Olympic Gold Medalist in the 100 freestyle (tied with USA’s Simone Manuel), could make a run at the U.S. Open Record in the 100 free, which is currently held by Sweden’s Sarah Sjostrom at 53.12 seconds, set at the January 2016 Austin PSS.

Those breaststroke US Open records are gone. He can swim a 58.5 pretty easily. This will be great for Cordes and Miller to see where they are in their training. It’s all good ?

If he swims breast in the 50 free could that count as a us open record too?

i don’t think so.

0
0
Reply
Swimmer A
Reply to  korn