How the U.S. Olympic Roster Looks After Night 1 of Trials 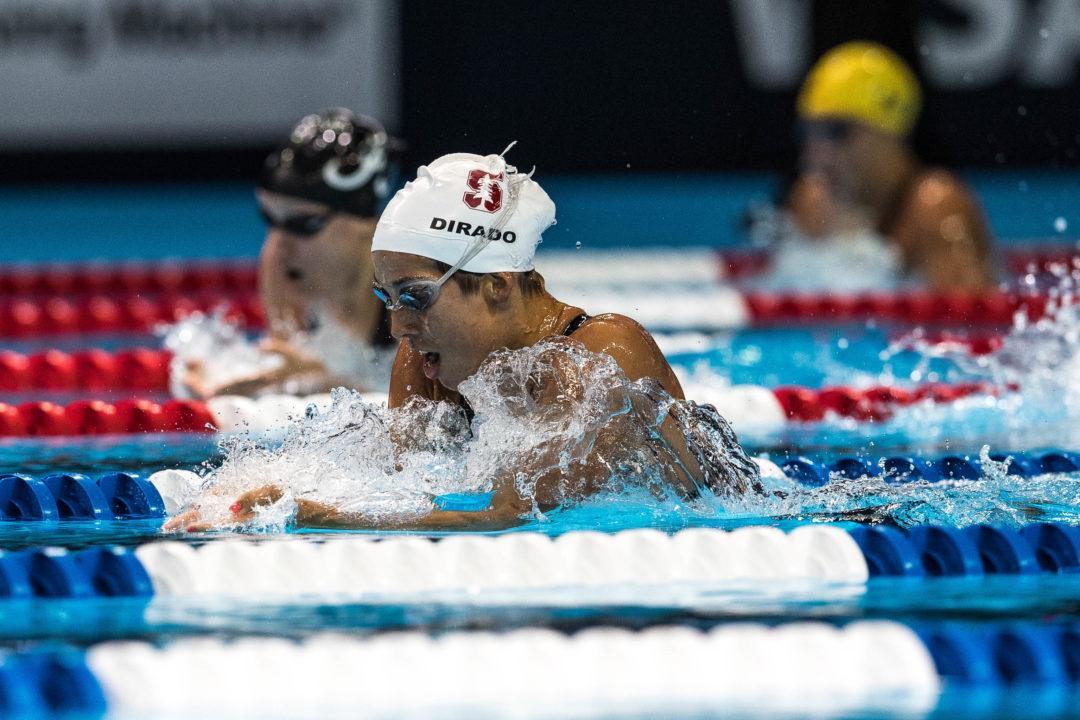 Maya Dirado has made it onto her first-ever Olympic team with a win in the 400 IM tonight. Current photo via Tim Binning/TheSwimPictures.com

Night one of the 2016 U.S. Olympic Trials is in the books, with three new Trials champions crowned. Here’s how the roster is looking after the first session of finals.

2016 OLYMPIC ROSTER AFTER NIGHT ONE

Kalisz, Jaeger, and Dirado are guaranteed spots on the 2016 U.S. Olympic Team with their strong performances tonight.

The 2nd place finishers aren’t guaranteed a spot on the team yet, because of a cap on team size. Only 26 men and 26 women are allowed on the team, which would be perfect if there were no relay swimmers, since there are 13 events with two individual spots for each. But, there are relay swimmers, so there is potential for there to be too many swimmers for the available spots.

However, it’s extremely unlikely for 26 different men to qualify for each unique spot on the team. Rather, there are instances where someone like Michael Phelps might qualify in two or three events, thus opening up more spots for people who finish second.

In all likelihood, enough swimmers will qualify in more than a single event, so all 2nd-place finishers in Omaha should make the team, too. Their spots just aren’t set in stone quite yet.

Of the six probably qualifiers, this would be Dirado’s, Litherland’s, and Kalisz’s first Olympic team. Jaeger and Dwyer made the team in 2012, while Beisel has made it to the last two Games.

The men’s 100 breast and women’s 100 fly semifinals were also swum, with Kevin Cordes and Dana Vollmer qualifying for the top seeds going into finals after tonight.

Even after filling the 13 first place finishers in all events, and 3 relay swimmers in the 100, 200 free, there remain 7 guaranteed spots for 2nd place finishers. So for events where the 2nd place swimmer ranks second in the world (from March 1, 2015 to present, after trials), for example Leah Smith in the 400, that swimmer is effectively guaranteed; In other completed events,
Jay Litherland ranks 5th in 400 IM
Beisel ranks 6th in 400 IM
Dana Volmer ranks 6th in 100fly
Cody Miller ranks 6th in 100 Breast
Conor Dwyer ranks 9th in 400 free

all of the above are likely to make it.
Every double frees up a spot,… Read more »

Having an empty roster spot seems painful. If USA has the top three world ranked swimmers in an event, and there is an empty roster spot, it seems reasonable to allow an available spot to go to that world class swimmer even if he/she finishes third at US Trials. Particularly where another swimmer who happens to finish second in a different event is far lower in world ranking. I’m assuming there is an Olympics limit of two swimmers per event per country, regardless of world ranking. Some sort of “anti-USA dominance” rule. Maybe that rule can be revisited by the IOC.

I wish we could see the morning prelims during the day.

Interesting…I never knew that 2nd place at trials wasn’t an automatic bid. (I suppose, technically, first place isn’t either. Could the team coach not take anyone in an event if there was no chance of medaling?)

On another matter, it seems brutal that heats and finals are the same day for the 400s. I know that’s how it is in the Olympics, so they’re mirroring that in the trials. Anyone have a thought on that? Why not separate them across days, as in the 800/1500?

Worse is, why is the men’s 400 free and 400 IM on the same day? I get it, it’s so Day 1 ticket-buyers get their money’s worth with 3 finals. But seems obvious there will be big conflicts down the road, even if nothing obvious for this year’s team USA. Internationally, Hagino might wish he could swim 400 free instead of 200. Would Almeida swim the 400 free, if there wasn’t a conflict?

There is ALWAYS a conflict with this swimmer and that swimmer.

If you have better scheduling idea, let’s listen what you have?

Great point about scheduling, Attila. Usually the long stuff (1000 or 1650 and 400 IM) is first, often even an extra day before, and I’m glad to get it out of the way. I’ve been to meets where it is mixed in with other events, and I can basically write off anything after the distance races. On the other hand, if I have to race a sprint-type event before the distance, I imagine I feel tired and then don’t get amped for the distance race. My favorite solution is to skip the long stuff altogether, but unfortunately that’s where I fit into the mix. So, I agree with Attila: “THERE IS ALWAYS A CONFLICT”.

4:11 in the I.M. Isn’t going to cut it. I would imagine that would be looked at if it came down to cuts. Get ready for Michael Andrew Wilson tonight and lookout for outside smoke in lane 8.

First place in every event and top 4 in 100Fr and 200Fr are automatic spots. The team coach does not have a vote in who is taken. The rules are layed out in advance of every Trials.

Has there ever been an event where the U.S. didn’t take the second place swimmer?

Yes, but not because if this particular max of 52 swimmers roster.
In 2008, Lara Jackson didn’t get to swim Beijing. At the OT she finished 3rd in 50 free behind Torres and Hardy.
Hardy was later in the week removed from the team due to positive doping test. But it was too late (by one or two days I think) past by the deadline for USA swimming to submit a new name to IOC.
This was one of the most obvious downfall having trials so close to the Olympics.

That’s why now you have OT one week earlier than before, to give time to submit a new name in case something like that happens again.

Tara Kirk also did not get to swim the 100 breaststroke after a 3rd place finish behind Hardy. I see that circumstance as different than what I think Bob is referring to. Both of those swimmers finished 3rd at trials and were not excluded from the team due to squad size limit.

2
0
Reply
Just your math
Reply to  Attila the Hunt

Both Beisel and Dwyer are pretty likely to qualify in other events (Dwyer more so), so it shouldn’t be a problem.

Almost feel like Jaeger’s more likely to qualify in a 2nd event than Beisel. He looked real good.

Yup. Jaeger is pretty much a lock for the mile, moreso than Beisel for sure.

Can anyone else please explain why the second place people arent guaranteed? I am still a little confused on the explanation

Kaez – the short answer is that there’s a roster limit, and if the top 2 in each event are all different (aka, if everyone only qualifies in one event), every 2nd place finisher doesn’t get to go. The reality is that there’s always enough doubles and triples to go. Though, I’d say this year with less Phelps and less Lochte, guys who swim so many events so well, there’s a better-than-normal chance of it happening.

They’ll name the 2nd swimmers officially on later days as the math goes that way.

It is worrying a little that with fewer swimmers poised to be in many events (it’s looking like Lochte will only swim 2 or 3, not 6, and Phelps will most likely do 5 or 6, and Franklin probably 1-4), that there is the possibility some people will be left off. Who gets cut first? Probably the 5th and 6th place relay finishers, I would imagine.

I was reading the selection rules on the usa swimming web site a couple of weeks ago. If I remember correctly the top 4 in 100 and 200 freestyle + the first person in all of the other events are guaranteed. Then they select number 2’s based on world ranking in the event until they reach 26.

Do any historians know if a second place finisher has ever been left off of the team?

No, never due to roster limitations at least. The U.S. has always been under the 26 roster limit.