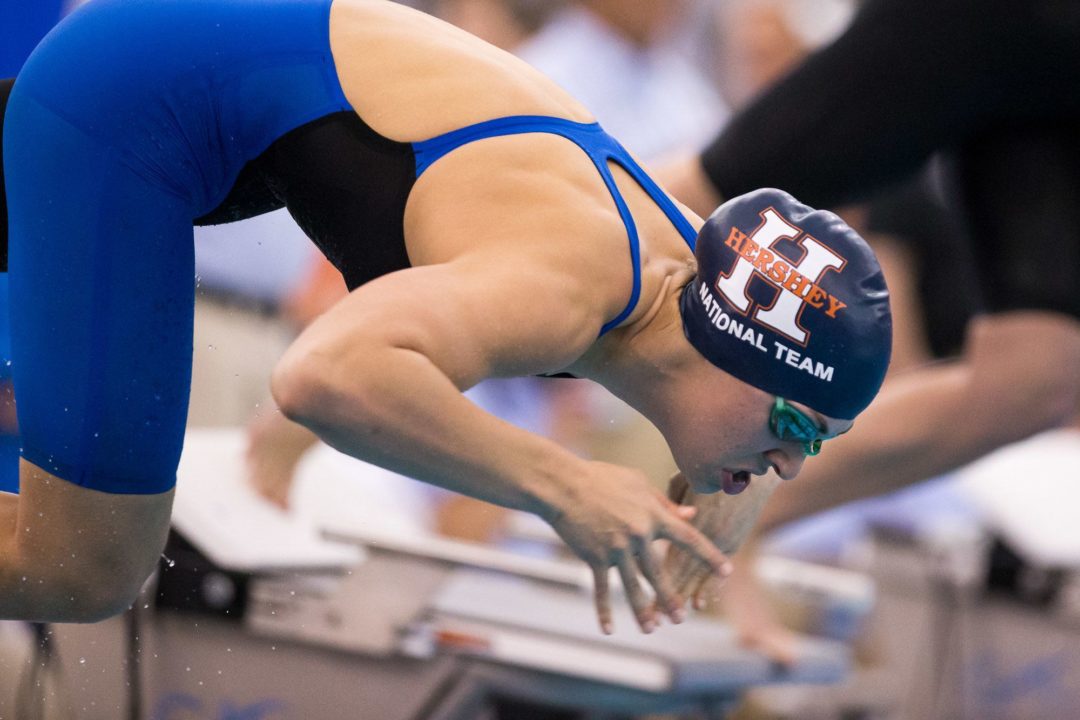 The PIAA meet is split up into two separate days, with prelims each morning and finals at night and the high school event order split between the two days.

The La Salle College boys continued to rack up points, charging to a 78-point victory over North Allegheny.

The second half of the meet opened with a win for Souderton senior Kevin Musterait. He went 43.94 to power away from Upper Dublin’s Michael Jensen, who finished second in his second-straight event after taking runner-up honors in the 100 fly to end day 1.

In the 500 free, North Allegheny’s Zachary Bueger picked up his second event win and very nearly his first state record of the championships. He put up a 4:22.75 in the meet’s longest event, beating Freedom’s Sam Magnan by 2.3 seconds. The state record is 4:22.21 set by Matt Belacanech back in 2009; Buerger was just a half-second off.

The 100 back saw a new National Age Group record set by winner Michael Thomas of Hatboro-Horsham High. He went 46.65 to sneak under the 15-16 mark of 46.72 set by Ryan Murphy in 2012, a record not many people expected to be under siege this quickly. Thomas has had a sharp improvement curve over the past 12 months. At this meet last year, he broke 50 for the first time in his career, going 49.11. Now, in just one year, he’s down to 46.6 as a junior, and if he can keep improving at that rate, could challenge David Nolan’s 45.49 state record or even Murpy’s 45.34 national high school mark by next year.

Second in that race was Upper St. Clair’s Ryan Dudzinski, who put up his own strong time of 46.88 to push Thomas in what was a two-horse race from the get-go. Dudzinski led at the 50 mark, but Thomas came home in 23.9 to seal the deal.

WC Henderson’s Thomas McCormick got the 100 breast win in a tight race. He went 54.92 to beat Lasalle’s Michael McBryan by just .05. McBryan was 54.97. Both are seniors. For McCormick, it was a breakthrough after finishing third to Buerger and Thomas in the 200 IM one day earlier.

Upper St. Clair took home the final event of the night, going 3:03.04 in the 400 free relay. That was led by a 44.00 anchor leg out of Dudzinski. As fast as that was, he had to hold off a surging La Salle, with anchor Greg Brocato splitting 43.62 and almost bringing his team back. They finished a close second in 3:03.32. North Allegheny made it a three-team battle, taking third in 3:03.49, and they led early with Buerger’s 44.18 leadoff.

Hershey kept its foot on the gas, winning 3 of 5 events en route to its second-straight PIAA state title.

Hershey was on top of it from the get-go: senior Madelyn Veith won her second nailbiter of the week, going 50.45 to nip Parkland sophomore Siena Salvaggio by just .01 for the 100 free title. Salvaggio, who was also second in the 200 free, went 50.46 and 50-free runner-up Katie Ford went 50.71 to beat out 100 fly champ Niki Price of Northeastern.

The 500 free went to Cumberland Valley’s Sabrina Mortell in 4:52.55. That was enough to overcome top-seeded Kathryn Painter of Norwin, who took second in 4:54.15.

The star of the meet so far has been Hershey’s Meaghan Raab, and she kept that tradition alive with a new state record in the 100 back. Her 53.08 broke the mark set just one year ago by Christina Leander by seven tenths of a second, and it gives Raab 4 different state records in Pennsylvania to close her high school career.

Hershey also won the 100 breast – it was junior Vivi Tafuto who did the honors in this one. She went 1:01.81 to power away from Hampton’s Katie Fernander early on.

The eventual state champions from Hershey made it three in a row with a win and state record in the 400 free relay to close the meet. The team of Kaley Buchanan, Tafuto, Veith and Raab went 3:21.34 to break their school’s state record from 2011. Raab was 49.07 on the closing leg.

Great and surprising swim for Raab in the 100 back. Until this season I always thought of her as just a mid distance free and IMer. It will be interesting to see if she can revamp her mid distance roots at Georgia next year or if she will continue this new found strength in the backstrokes. With Smoliga/Zilinkas + the additions of Stewart and now Raab, the Georgia backstrokers will be looking very deep next year.