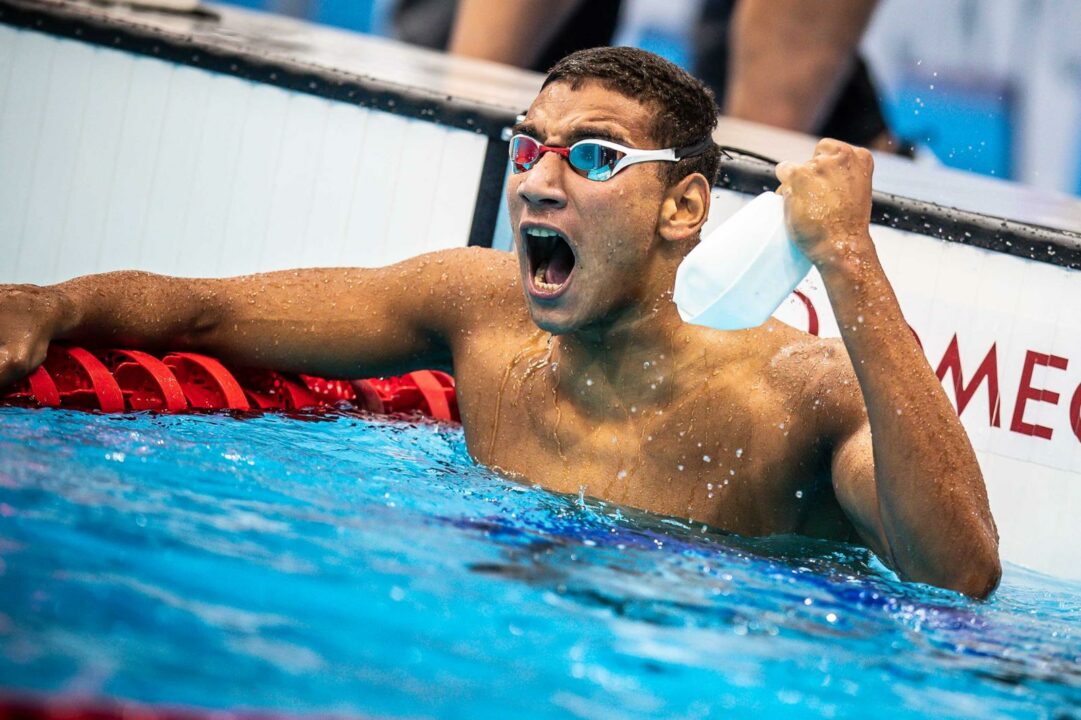 Tunisia’s Ahmed Hafnaoui took the silver medal in the men’s 1500 behind newly-minted World Record holder Florian Wellbrock in 14:10.94. That swim was the 7th fastest 1500 of all-time and makes Hafnaoui the 5th fastest performer ever, behind only Wellbrock, Gregorio Paltrinieri, Mykhailo Romanchuk and Grant Hackett.

The swim also chops nearly 8 seconds off Tunisian swimming legend Ous Mellouli‘s African Record of 14:18.79, which was set at the 2014 Short Course Worlds when Mellouli took silver behind Paltrinieri. Hafnaoui also broke the African Record in the 800 at the 800 meter split of this race.

Looking at the splits, Hafnaoui was consistently faster than his idol from start to finish, splitting 28 mids to Mellouli’s 28 highs over the first half of the race, though Hafnaoui made a clear speed change at the halfway point where Mellouli stayed consistent. Hafnaoui dropped from 28.6s to 28.3s and 28.4s, which he held until the 1200 mark, where his splits started to creep up, though still ahead of Mellouli’s record pace. Hafnaoui closed in a blistering 25.94, the fastest in today’s field to seal the silver medal.

Hafnaoui will be following in his idol’s footsteps further, as he plans to make the move to Bloomington, Indiana in the fall and compete in the NCAA. While Mellouli swam for USC in Los Angeles, he was an NCAA champion in 2005 in the 400 IM and 16 time All American for the Trojans, including individual All American honors in the 400 IM, 500 free and 1650 free.

With his silver medal here in short course meters, Hafnoui demonstrates an even further likelihood that he will be able to translate his long course success, which included a shocking upset win in the 400 free at the Tokyo Olympics, to the NCAA short course yards format.

So much for him being a fluke

That 2001 swim from Grant Hackett is bonkers in context

Grant and Thorpe were the prototypes for Freestyle along with PVDH, if they were here today peaked with todays training/suits, the podium in the 200 would be straight 1:43s. Nuts

I am much more ok with the Biedermann record after the Agnel news.

Can’t wait for Ahmed Hafnaoui and Bobby Finke 1650 in 2022. Hopefully, their coaches peak them correctly.

Bobby Finke is a senior this year. He will probably go pro after this upcoming March.

Doesn’t he get a bonus year if he wants it? I totally understand going pro instead, but maybe he’ll get enough NIL money to stick around another year.

IU has a heck of a distance swimmer coming in next year!