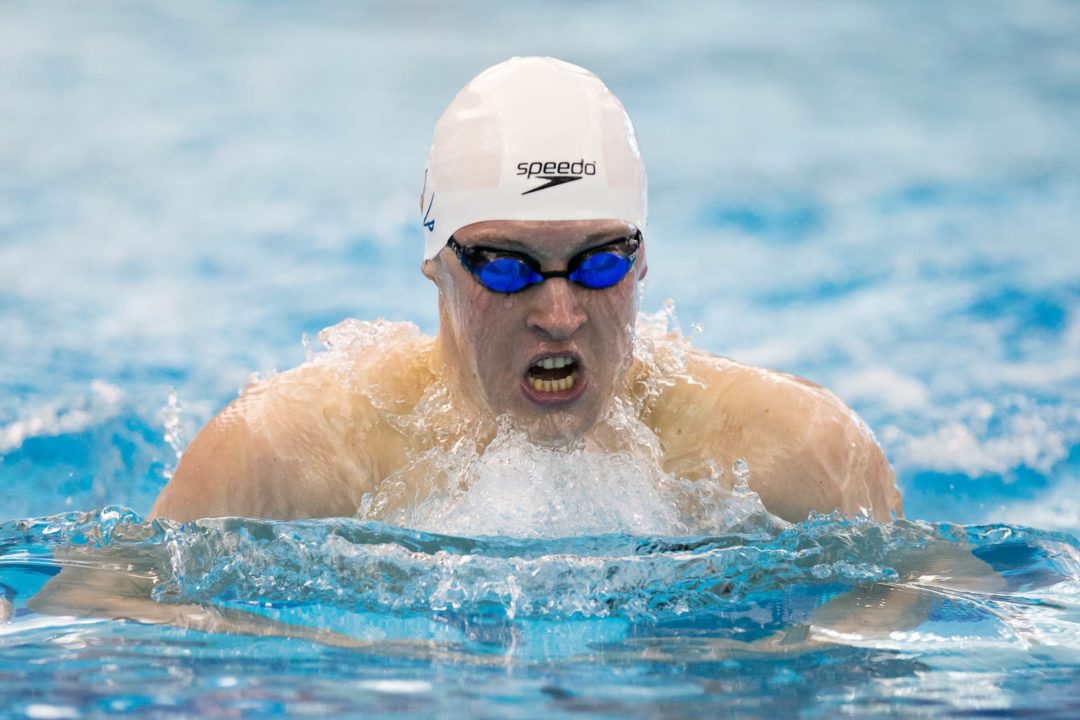 Virginia's David Ingaraham is the top seed in the 400 IM in prelims, but the defending champion Tom Luchsinger is lurking. (Photo Courtesy: Tim Binning/TheSwimPictures.com)

Weathering a storm in prelims that included some of their weaker events, the Virginia men look ready to effectively seal-up their 6th-straight ACC title on Friday in Greensboro, with 14 swimmers getting into A-finals (and nobody else having more than 6).

That included top seeds for the Cavaliers in both the men’s 400 IM, where sophomore David Ingaraham was a 3:45.93, and not surprisingly the 200 free.

Ingraham’s swim was a season best by more than 4 seconds, and he was followed by North Carolina’s Tom Luchsinger in 3:46.12. Luchsinger is the defending champion, but the top three in this prelim (along with UVA’s Brad Phillips) are under his winning time from last year’s meet already.

Virginia’s Tom Barrett was the top seed in the 200 free in 1:35.01. He’ll be chased by a trio of sub-1:36’s from guys who had bigger drops in prelims: UNC’s Brad Dillon, NC State’s Jonathan Boffa, and NC State’s David Williams. The Wolf Pack, who infamously touched first in the 800 free relay before being DQ’ed on Wednesday, matched Virginia with three in the A-final; NC State also had two in the B-Final.

In tonight’s finals session, Rodriguez will be the key to Florida State’s 400 medley relay. They’re the favorites anyway, but with that leg shored up that well, they could be chasing the ACC Record of 3:08. Especially with how well Pavel Sankovich has ben swimming – he took the top seed in the 100 backstroke in 46.45. That was ahead of two freshmen: North Carolina’s Nic Graesser and Virginia’s Luke Papendick, who both went 46-highs.

Virginia Tech’s Zach McGinnis was the top seed coming in, but touched just 6th in prelims in 47.16. There’s lots of opportunity for him to move up though, as the three Virginia swimmers ahead of him only span two-tenths of a second.

Virginia, with 14 swimmers into A-finals, should extend their lead on the third day of this meet. The saving grace for North Carolina and North Carolina State are all of those swimmers in B-Finals: they need those to all turn into high B-finals, however.