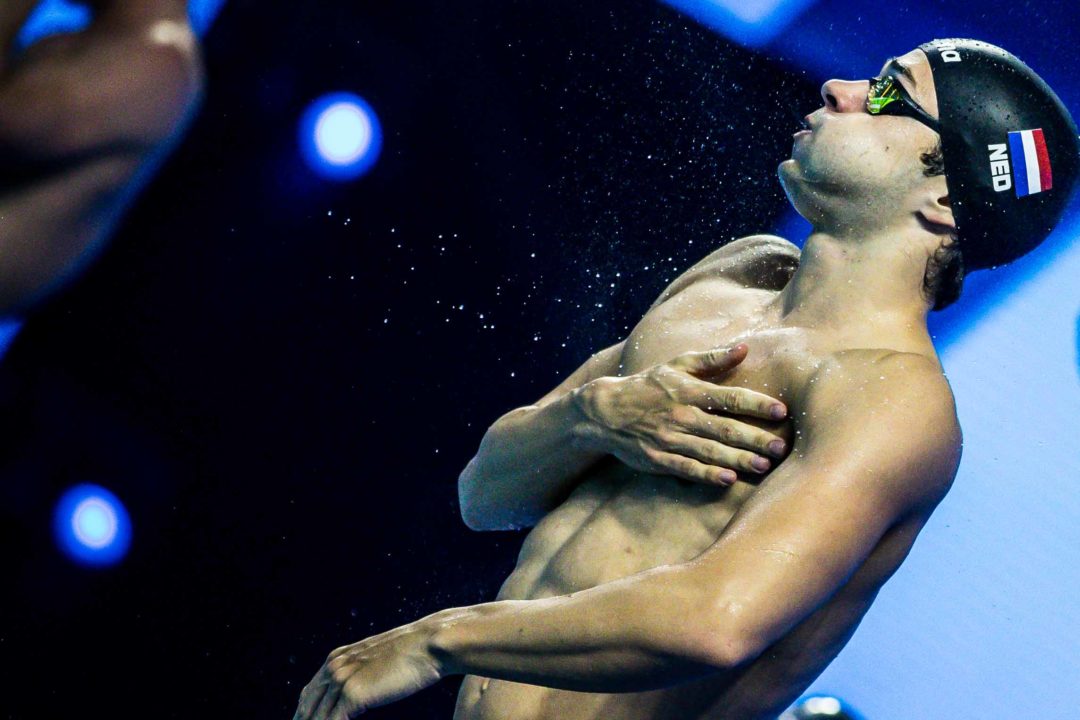 Some of the world's best are expected to race this weekend at the 2021 Flanders Qualification Meet, including Dutchman Arno Kamminga. Archive photo via Jack Spitser/Spitser Photography

The annual Flanders Swimming Cup has transitioned into the Flanders Qualification Meet for this 2021 calendar year.

Set for Antwerp, Belgium on Saturday, January 23rd, and Sunday, January 24th, this Flanders Qualification meet will serve as a FINA-sanctioned qualification meet for the postponed 2020 Olympic Games. The event is open for domestic swimmers able to train during the current coronavirus lockdown, as well as visiting foreign swimmers.

Although the British and Lithuanian contingents we saw last year are absent this time around, the lineup of racers includes a power pack from the Netherlands along with a sprinkling of Austrians and Germans.

With this in mind, here are the top 5 races to watch at this weekend’s Flanders Qualification Meet.

Kamminga carries the fastest time between the two, as well as among the world this season, for that matter, owning a lifetime best of 2:06.85. That outing was conducted at the Rotterdam Qualification meet, securing a spot on the Dutch Olympic roster for Kamminga in this event.

Koch was focused on short course last season, competing as a valuable member of the NY Breakers in the International Swimming League (ISL). His lifetime best in the 2breast rests at the 2:07.47 he put up way back in 2014, but he was near that at 2:07.90 en route to 5th place at the 2019 World Championships.

Another two-swimmer matchup is lined up for the women’s sprint breaststroke, with the Netherlands’ Tes Schouten pitted against Belgian racer Fanny Lecluyse.

Schouten recently clocked her 2nd sub-1:07 time ever at the aforementioned Rotterdam meet last December. Her time there of 1:06.92 sliced .04 off of her own previous PB and Dutch national record.

As for Lecluyse, the 28-year-old veteran owns a PB of 1:06.97, a time she registered in Gwangju in the semifinals, just missing the final. As such, these two women are separated by a fingernail headed into this Flanders Qualification Meet and should render this 1breast as a key race to watch as they vie for Olympic qualification.

Dutch Olympic medalist Femke Heemskerk was shut out of December’s Rotterdam meet due to coronavirus quarantining. While she was forced to sit out of the competition, fellow teammate Valerie van Roon took over the 2nd spot on the Dutch Olympic roster for Tokyo in the women’s 50m free. You can read more about this situation here.

Heemskerk was expected to race at the Geneva International Challenge last weekend but did not race. She is still expected to be in Flanders to contest the 50m/100m/200m free, as well as the 50m and 100m butterfly events. I’ve reached out to Heemskerk to confirm.

Fellow competitors in the freestyle events include 2015 multi-European Games gold medalist Marrit Steenbergen. 21-year-old Steenbergen is seeking Olympic relay qualification, at a bare minimum, after having taken some time off from the sport to focus on her studies.

Steenbergen put up some strong times at the HPC Invitational last October, in short course.

Belgian Olympian Louis Croenen leads the men’s 100m fly field on paper, but his seed time of 52.10 sets him apart from 2nd-seeded Matthys Goosen of the Netherlands by just .10.

Behind them, there’s Joeri Verlinden and Nyls Korstanje, both also from the Netherlands, ready to surge to the top once they take their marks.

They’ll all be chasing the 51.97 FINA ‘A’ cut needed to qualify for the postponed 2020 Olympic Games.

This is set to be another close race among the top competitors, with the field led by the Netherland’s Maaike de Waard. She carries a time of 58.10 as the top-seeded racer, but right behind her is 15-year-old young gun Roos Vanotterdijk of Belgium.

Vanotterdijk fired off a personal best of 58.20 last year in Hengelo as her 2nd sub-59 second time of her promising career. As such, we’ll see if she can do it again against 24-year-old de Waard, as well as Belgium’s Kimberly Buys here in Flanders this weekend.