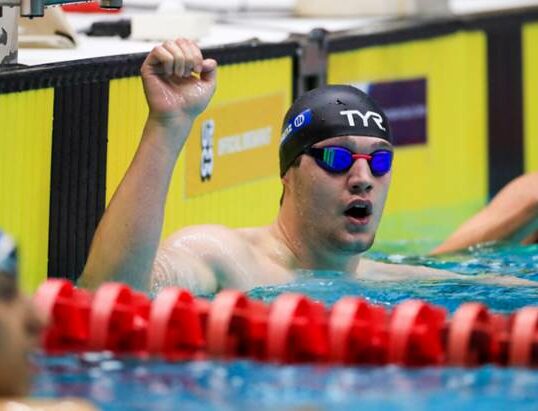 During day 7 finals of the Tokyo Paralympics, Brit Reece Dunn won his third gold medal and fourth Paralympic medal by breaking the World/Paralmpic records in the SM14 men’s 200 IM final. At the end of the session, 3 World and 6 Paralympic records were set.

Dunn set the first pair of World and Paralympic records of the session in that 200 IM final, where he shaved 0.14s off the 2019 World record with a time of 2:08.02. His time also eclipsed the 2016 Paralympic record of 2:10.29. Also swimming under the former Paralympic record were medalists Brazil’s Gabriel Bandeira (2:09.56) and Ukraine’s Vasyl Krainyk (2:09.92). Bandeira’s silver medal time also established new Americas/South American continental records.

During his post-race interview, Dunn did not know he had broken the World record. “Did I break the world record?! I didn’t even see what time I went!”, exclaimed Dunn. “I knew I was turning quite high up the field, but I had to try to get some lead before the breaststroke. I’ve no idea where I was. I had to max every single length, the first 100m was strong, it felt good. The breaststroke felt the best it has felt for a long time, but I was in agony that last 50m.”

Dunn started the race with a strong opening 100 of 59.52, splitting 26.82 fly and 32.70 back to open up a strong lead into his weakest stroke, breaststroke. After placing second at the 150-mark, Dunn threw down a 29.43 to dominate the entire field and surprise himself with his personal best.

This marks Dunn’s third Paralympic gold in Tokyo, following up from his golds in the mixed 4×100 free relay and 200 free. Dunn also picked up silver in the 100 fly, totaling four medals thus far.

RPC’s Valeria Shabalina added a second gold medal to her 100 fly title earlier in the meet by taking the SM14 women’s 200 IM final at 2:20.99. Behind her was a trio of British swimmers, with Bethany Firth (2:23.19) and Louise Fiddes (2:29.21) rounding out the podium. During the preliminaries, Fiddes had won her heat, yet was originally disqualified on a technical infringement. However, the British team was able to successfully overturn her disqualification and put her into the final.

Mexico’s Arnulfo Castorena sealed Paralympic gold in the SB2 men’s 50 breast with the only sub-minute effort of 59.25. Australia’s Grant Patterson added a silver medal to his collection at 1:01.79 while another Mexican swimmer, Jesus Hernandez, picked up bronze at 1:02.27. Placing seventh in the final was SB1 swimmer Aliaksei Talai, who took down his hours-old Paralympic record of 1:24.86 with an effort of 1:23.16.

A plethora of records fell in the S7 women’s 100 free final. Winning the gold medal by taking down the 2012 Paralympic record was Italy’s Giulia Terzi, whose time of 1:09.21 also set the European continental record. USA’s McKenzie Coan earned the silver medal behind Terzi with a time of 1:10.22. Two S6 swimmers tied for third place at 1:11.07, both breaking the 2016 class World and Paralympic records of 1:11.40, courtesy of bronze medalists Ukraine’s Yelyzaveta Mereshko and China’s Jiang Yuyan.

Breaking the 2016 World and Paralympic records in the S10 men’s 100 fly was Ukraine’s Maksym Krypak, touching the wall at 54.15. Italy’s Stefano Raimondi took the silver medal at 55.04 while Australia’s Col Pearse set a new Oceanian record at 57.66 for the bronze medal.