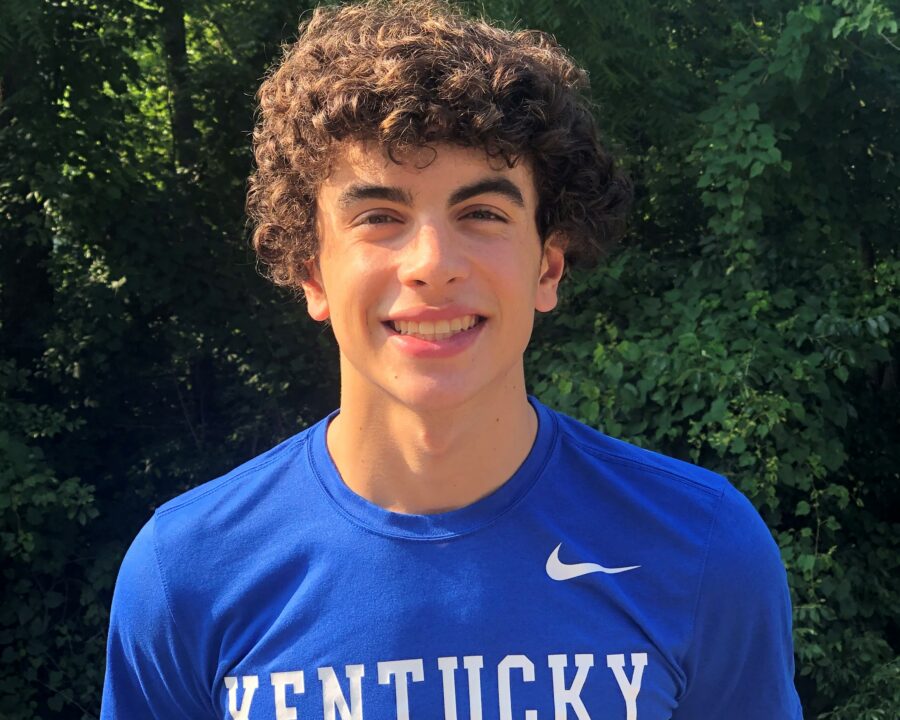 Kevin Glennon, who's qualified for Winter Juniors, the US Open, or Futures in 7 events, looks to add a wealth of depth to the Wildcats roster. Current photo via Kevin Glennon

Kevin Glennon has verbally committed to swim at the University of Kentucky beginning in the fall of 2022. Glennon will add a significant amount of depth to the Wildcat’s roster, as he’s qualified for Futures, Winter Juniors, or the US Open in 7 individual SCY events.

“I’m excited to announce my verbal commitment to swim and study at the University of Kentucky! I am thankful for all the family, friends and coaches that have helped me along the way! GO CATS🔵 #bbn”

Glennon swims year-round with the Countryside Ralph Stolle YMCA in Lebanon, Ohio. Glennon competed at the 18&U Winter Championships – WI PX and qualified for finals in each of his 6 individual events. In addition, he notched a new personal best in each.

His best times in SCY are:

Glennon has made substantial improvements within the past few seasons. Here’s some events that highlight Glennon’s progression:

Notably, in the 200 fly, Glennon dropped a staggering 4 seconds in only 2 months.

Glennon also had great leadoff performances in Kings Mills’ sprint relays. Glennon led off Mills’ 3rd place 200 medley in 22.83, which was the fastest 50 back split in the field by almost a full second. Later in the meet, he led off the 200 freestyle relay in 20.98, which placed 4th at the state meet.

Glennon’s range of events will be utilized upon his arrival to Lexington, Kentucky. Based on the 2020-2021 season results, Glennon will enter ranked with the #4 best time in the 50 free, which indicates his potential to be on Wildcat relays. Glennon is also ranked as the #2 50 backstroker, #3 100 backstroker, #3 50 flyer, and the #3 100 flyer.

The University of Kentucky is a Division I school that competes out of the Southeastern Conference (SEC). At the 2021 men’s SEC Championships, Kentucky placed 7th with 759 points. While Glennon is not currently in scoring range at the conference or NCAA level, he’s only .7 off the 100 fly and 1.2 seconds off the 100 back NCAA “B” cuts.

The Wildcats are led by head coach Lars Jorgensen. Jorgensen, who runs both programs, led the Wildcat women to their first SEC Championship title in 2021. As an athlete, Jorgensen represented the United States in the 1500 free at the 1988 Seoul Olympics.

Glennon will join Drew Johnson, Phillip Khenner, Sean Mackey, Ryan Merani, McCord Riegler, and Levi Sandidge, who is the #22 ranked recruit of the entire class of 2022, as members of the incoming class of 2026.