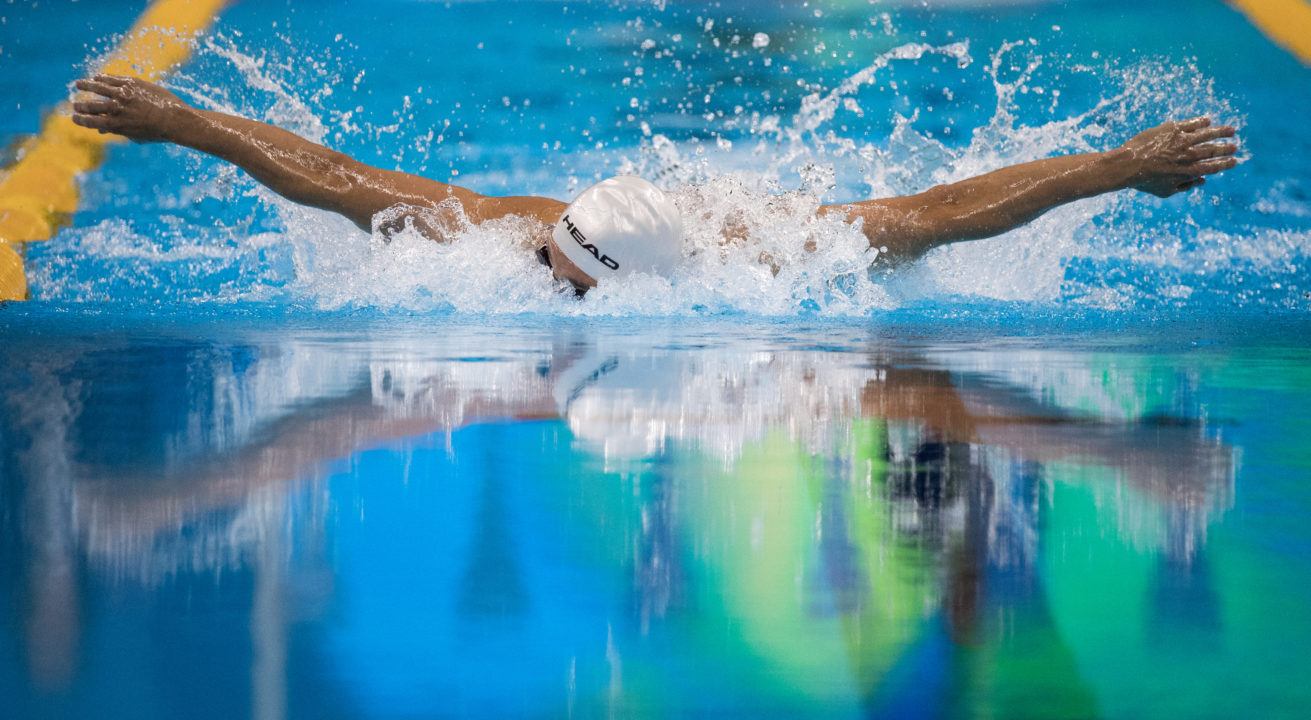 Taking down the first World and Paralympic record pairs of the day was Canada’s Danielle Dorris, swimming 33.51 to better the 2008 Paralympic record and 2012 World record in the S7 women’s 50 fly. In the final, Dorris broke 33 seconds for the first time at 32.99. Taking bronze was Italy’s Giulia Terzi (34.32), a new European record.

Another Paralympic record that has stood since the 2008 Beijing Games bit the dust. In the S4 men’s 50 back preliminaries, Czech Republic’s Arnost Petracek swam 41.75 to crush the standing 42.71 Games record. Later in the final, RPC’s Roman Zhdanov broke the Paralympic record and clipped half a second off his own World record with a swim of 40.99.

China’s Li Guizhi broke the 2012 Paralympic record in the S11 women’s 100 free to lead prelims, stopping the clock at 1:05.92 for a new Asian record. Shaving a mere five one-hundredths off her prelims Paralympics record to win the final was Guizhi, re-setting the Asian record at 1:05.87. Placing fourth in the final was USA’s Anastasia Pagonis, setting a new Americas record of 1:06.65, just 0.09s outside earning another medal.

Kicking things off in the last finals session was Ukraine’s Makysm Krypak, who set the Paralympic record in the SM10 men’s 200 IM final at 2:05.68 to take the gold medal.

Shaving five one-hundredths off the 2016 Paralympic record to win the SM10 women’s 200 IM final was Chantelle Zijderveld of the Netherlands, touching the wall at 2:24.85. Canada’s Aurelie Rivard placed fourth to set a new Americas record of 2:28.73.

In the last event of the entire ten-day meet, the 34 points men’s 4×100 medley relay, two different World records were broken. Leading off for RPC was Bogdan Mozgovoi, who broke the S9 men’s 100 back World record at 1:01.00. He was then followed by Andrei Kalina, Alexander Skaliukh, and Andrei Nikolaev, combining for a new relay World record time of 4:06.59. Australia swam 4:06.59 for the silver medal, a new European record.

Are these records (69 world and 124 Paralympic) just for swimming, or overall?

(It’s “crown jewels,” not “crowned jewels”: “crown” can be an adjective, like crown lands – belonging to the monarchy – which sounds odd to us Americans!)

Thank you for compiling all of this! Two incredible meets in a very fast pool, lots of pent-up racing after 18 very strange months. From a. Fan perspective, it was wonderful and exciting to watch. Congratulations to all of the athletes (and coaches, trainers, PTs, ATs, and everyone involved)!