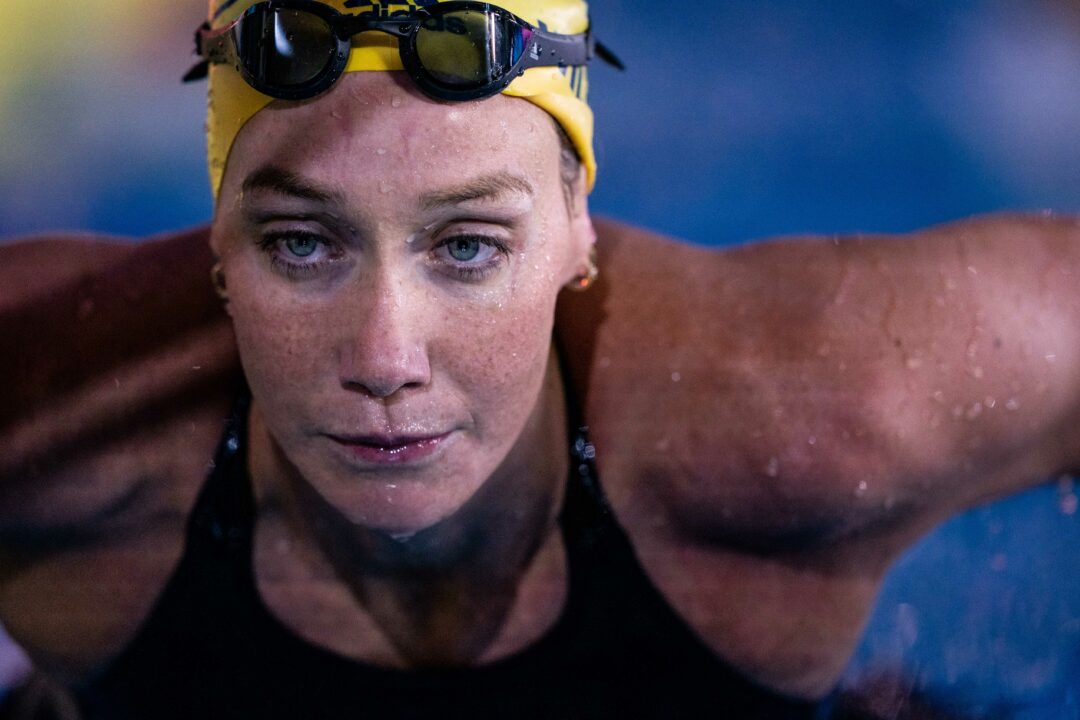 Day 1 of Match 4 showcased a much more competitive field than Match 2 did, thanks to some big swims from the DC Trident and the LA Current. Current photo via Mine Kasapoglu

Day 1 of Match 4 showcased a much more competitive field than Match 2 did, thanks to some big swims from the DC Trident and the LA Current. The Cali Condors have the lead after the first 20 events, which was expected, but the Condors are only leading by 24 points. For a short time following the men’s 400 freestyle, the LA Current had the lead with 218 points versus the Condors’ 204 points after event #18. A strong surge from the Condors in both the women’s and men’s medley relays, as well as some impressive performances from the Aqua Centurions, gave the lead back to the Condors, resulting in the current standings.

Every Team’s Roster Has Gaps

If the swimming on Saturday in Naples showed us anything, it’s that no team has all of the bases covered–every team has some gaps in their roster, though some are more apparent than others. For example, the LA Current demonstrated extreme prowess in the 400 freestyle which they can back up in the 200. However, LA struggled a little in breaststroke. That doesn’t mean their roster is weak in breaststroke–perhaps the swimmers just need another week to find their footing–but day 1 of Match 4 left a lot to be desired of LA’s breaststroke crew. The Cali Condors received a huge boost to their breaststroke squad with the return of American Record holder Nic Fink, who put up a huge 55.98 split on the men’s 4 x 100 medley relay. Even so, they are having a hard time in the IMs–Caeleb Dressel and Marcin Cieslak are dominant in the men’s 100 IM, and Beata Nelson can swim a solid 100 and 200 IM, but beyond that they’re stretched thin. Mark Szaranek hasn’t been on form so far this season, and he’ll need to up his game to get Cali back online in the men’s 200 and 400 IMs.

Furthermore, the Cali Condors are sorely lacking in the 400 freestyle, a weakness that the LA Current exploited to a huge advantage today. In the men’s 400 freestyle, LA placed 1st and 2nd, and stole all of the points from Cali’s two swimmers, including a 6-point bonus temporarily awarded to Cali’s Khader Baqlah for turning first at the 100-meter mark of the men’s 400 freestyle. All told, LA earned 26.5 points from the men’s 400 freestyle while the Condors were deducted a point for Tom Peribonio failing to meet the minimum time standard, creating a 27.5 point split between the two California teams in less than 4 minutes of swimming.

The Aqua Centurions are one of the best breaststroke teams in the league this season, yet they struggle in backstroke. Thankfully for them, they have Leonardo de Deus, though one man can’t carry an entire team’s efforts in that discipline. The DC Trident is great in backstroke and IM, but their butterflyers haven’t hit their stride yet, although Zach Harting could topple LA’s Tom Shields in the 200 fly on day 2.

Madison Wilson is One of the Best Freestylers in the ISL

The LA Current’s Madison Wilson has been having a great season so far. Wilson is a versatile freestyler that can challenge teammate Abbey Weitzeil in the 50 and 100 meter distances, as well as anyone else in the league in the 200 and 400. In fact, Wilson placed 2nd in the 50 freestyle on Saturday (24.19), led off the victorious 4 x 100 freestyle relay in a 52.15, and tied for 1st in the 400 freestyle in 4:02.98. Wilson also came away with 14.5 points in the 400 freestyle, more than anyone else in the field, because she cashed in at the 100-meter checkpoint for an additional 6 points. On top of that, she split jackpot points with co-victor Leah Neale of the DC Trident. If that’s confusing, here’s a breakdown of Wilson’s points earned in the 400 freestyle.

Perhaps the only other freestyler in the ISL right now with Wilson’s range is Energy Standard’s Siobhan Haughey, who also placed 2nd in the 50 freestyle in her most recent match and then won the 400 freestyle later in the session. Haughey is also Energy Standard’s top female performer in the 100 and 200 freestyles, especially now that Sarah Sjostrom is leaving for the remainder of the regular season. The LA Current and Energy Standard will face off in Match 8, so we’ll get the opportunity to see Wilson and Haughey go head-to-head once in the regular season.

Coleman Stewart, Nic Fink, Caeleb Dressel, and Justin Ress combined for a 3:20.68 in the men’s 4 x 100 medley relay on Saturday, missing the American Record by a mere 0.7 seconds. Why is this notable? Well, Stewart’s best time in the 100 backstroke is 48.33, yet today he swam a meager 49.82. Dressel was also well off from his best time in the butterfly (48.81 today versus 47.78 lifetime best), and he had a flying start for the relay. If the lineup stays the same and Stewart and Dressel sharpen up a bit, the American Record in the men’s 4 x 100 medley relay is probably going down at some point this season, perhaps even multiple times.

The Crowd Was Instrumental

The fans showed up to cheer today in Naples, buoying the “home team,” the Aqua Centurions, to some great performances, especially in the relays. In the post-meet skins selection, Mark Foster, the ISL correspondent on the pool deck, asked the coaches what they thought of the atmosphere. Though the coaches acknowledged the crowd’s enthusiasm for the Aqua Centurions, they also stated that the energy was contagious and that it fueled their teams to have passionate fans in the stand cheering again.

While the Condor women would have loved the opportunity for a breaststroke skins, they’ll have to rely on Kelsi Dahlia and Erika Brown for butterfly instead. Still a solid duo, though LA gets to throw in Beryl Gastaldello, while the Aqua Centurions have Elena di Liddo, and DC Trident Linnea Mack. The men’s skins looks like a slam dunk for the Condors who will of course use Caeleb Dressel and probably Justin Ress. Ryan Held has not been particularly sharp for the LA Current so far this season, but Brett Pinfold has been swimming well. The Aqua Centurions have some leverage with Alessandro Miressi, who ought to at least make the skins semis, if selected to swim it. The DC Trident looks vulnerable for Sunday’s skins as neither Zach Apple nor Ryan Hoffer have quite found their groove yet, but maybe day 2 of Match 4 is when it will come together for them.