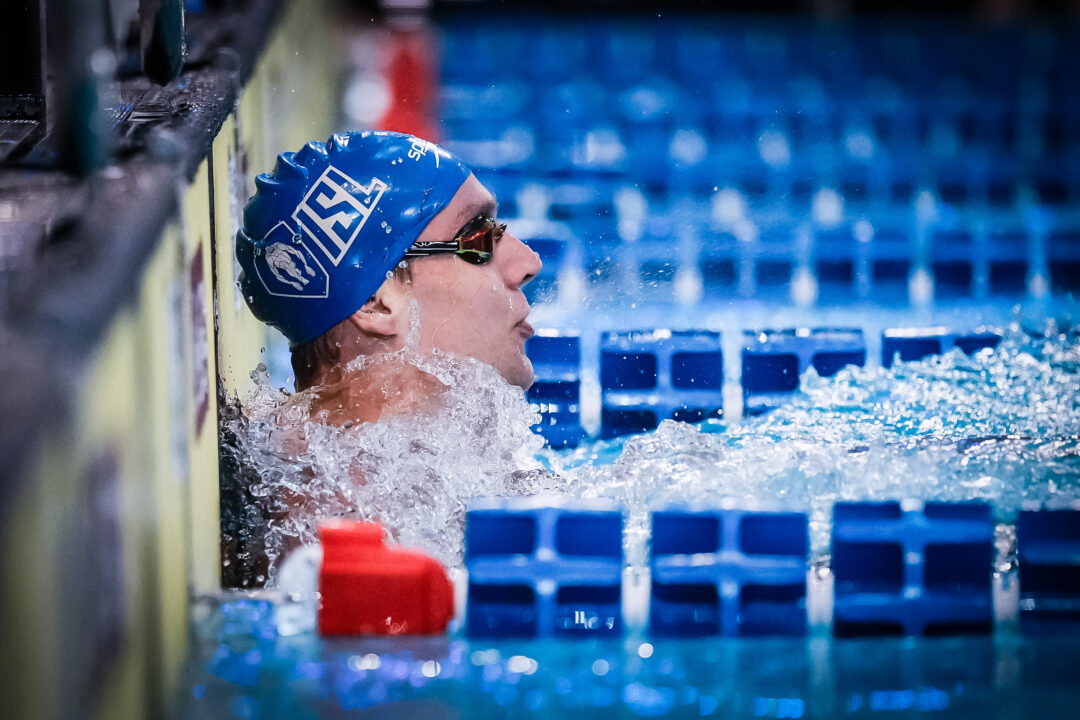 The Cali Condors, the Aqua Centurions, the DC Trident, and the LA Current all convene for the 3rd match of the 2021 ISL season. Current photo via Mike Lewis/Ola Vista Photography

2021 Swammy Awards: Rocco Meiring Is African Coach of the Year

Rocco Meiring won the Swammy for African Coach of the Year. The South African coach has produced greats like Tatjana Schoenmaker and Kaylene Corbett.

Were There More DNSes and DQs in the 2021 World SC Championships than Before?

Lydia Jacoby did not start (DNS) the 100 breaststroke due to close contact with a COIVD-19 positive individual at the 2021 World Championships.

The Cali Condors are going to win this meet, no question about it. The LA Current is a good team, finishing 4th in the league in both 2019 and 2020, and yet the Condors took them down by over 300 points in Match 2. The spread between the Condors and 2nd place probably won’t be quite that large this weekend, but it seems obvious that they’re going to win… probably by triple digits.

The DC Trident is revamped this season, yet still likely to finish in the bottom two in the final league standings. Yes, it’s just the third match, and only the second outing for the Trident, but they only scored 311.5 points in Match 2. By comparison, that is still more than the New York Breakers scored in either of their first two matches (269.0 and 278.5, respectively, for Match 1 and Match 3).

Meanwhile, the worst-placing European teams of the previous two seasons, the Aqua Centurions and Iron, have seriously upped their game this season and will make for an interesting battle for 2nd this weekend in Naples.

Such prognostication, it’s only the third match of the 2021 season! «Mi scusi!» It’s part of the job.

The Cali Condors won’t win every race–duh. So, let’s explore what will make this meet interesting.

The Cali Condors absolutely dominated the 50 and 100 butterfly races at Match 2 on both the men’s and women’s sides. Consider: Caeleb Dressel, Kelsi Dahlia, Erika Brown, Marcin Cieslak, to name a few. LA is no joke in the fly either though–Tom Shields, Beryl Gastaldello, Helena Gasson, and Maxime Rooney. Granted, Rooney had a tough first outing for LA this season, but he has a stellar resume in the ISL, though more as a freestyler. Shields and Gasson were both good in Match 2, and Gastaldello didn’t even swim fly in Match 2, despite being the ISL Record Holder in the 100 fly.

DC has a solid fly crew as well, including Zach Harting, Maddie Groves, Szuszanna Jakabos, Ryan Hoffer, and Camden Murphy. In a normal context, that crew would be a slam dunk, but in the ISL they’re one among many. Still, we expect them to pull some decent points, especially in the 200 fly. The Aqua Centurions are the weakest of the four teams in fly, and yet they still have Elena de Liddo, Szebasztian Szabo, Holly Barratt, Laura Taylor, and Matteo Rivolta.

A guy named Coleman Stewart broke the World Record in the 100 backstroke in Match 2. That’s hard to compete with at this stage of the season. Then there’s Beata Nelson, the Match 2 skins champion and overall backstroke butt-kicker on the women’s side. Sherridon Dressel, on the other hand, is the Match 2 champion in the 50 and 100 backstrokes. Albeit a surprising finish for her in each race, she seems to be adapting to the pro life quite well in her second season in the ISL. On top of all that, if Instagram is to be believed, Olivia Smoliga is in Naples. Whether or not Smoliga races this weekend almost doesn’t matter–the ‘Dors are so stacked in backstroke, she could swim sprint freestyle and nothing else, or just cheer from the sidelines, and they’ll still take home massive points in backstroke. If she is utilized in the 50 or 100 back, since she is arguably more sprinty than Nelson, who favors the 200, well, woe unto the other teams.

While Cali brings the most firepower in the backstroke, the LA Current brings Ingrid Wilm and Kathleen Baker on the women’s side, and Apostolos Christou on the men’s side. Not having Ryan Murphy leaves a significant gap in their roster though. The DC Trident will leave heavily on Jacob Pebley, Ali DeLoof, Linnea Mack, and Tristan Hollard, and Pebley will have a legitimate shot at winning the 200 backstroke with no Murphy or Rylov in the field. The Aqua Centurions have a rougher time with backstroke, and Holly Barratt and Matteo Rivolta will need to step up big time. Aqua may also have to use Federica Pellegrini in either the 100 or 200 back on the women’s side.

Lilly King and Molly Hannis are incredibly difficult to beat in the ISL, and either of them should be considered the favorite in all three breaststroke events on the women’s side. Arianna Castiglioni and Martina Carraro from the Aqua Centurions could make the 50 and 100 breaststrokes interesting, and Carraro can race the 200 as well. Anastasia Gorbenko and Imogen Clark will be vital to LA’s success in women’s breaststroke. Maria Temnikova and Tatiana Belonogoff were both decent in their first match and are the only two solid female breaststroke swimmers DC has.

The Aqua Centurions are bringing in a lot of firepower on the men’s side in breaststroke with Arno Kamminga, Nicolo Martinenghi, and Fabio Scozzoli. Their main challengers will likely come from DC Trident’s Felipe Franca Silva and Tommy Cope, either of whom could upset Aqua for a win in one of the breaststrokes this weekend. Cali has Kevin Cordes and Oleg Kostin, though breaststroke has to be Cali’s weakest discipline on the men’s roster. LA will bring in Will Licon and Christopher Rothbauer, potentially shaking up the points a little if they can each place ahead of Cali’s two breaststroke swimmers.

Caeleb Dressel, Justin Ress, Townley Haas, Jesse Puts, and Kacper Majchrzak make for a tough freestyle crew for the Condors. The LA Current is a little stronger in the 200 and 400 distances with Fernando Scheffer and Martin Malyutin, and cover the sprints pretty well too with Ryan Held, Brett Pinfold, and Maxime Rooney. Zach Apple and Ryan Hoffer are DC’s best sprinters on the men’s side, though neither swam particularly well in their first match. Zane Grothe placed 2nd in the 400 in Match 1, but he’ll have his work cut out for him with Aqua’s Matteo Ciampi and Stefano Ballo. The Aqua Centurions really shine in the sprints, where Szebasztian Szabo, Alessandro Miressi, Thomas Ceccon, Vladislav Grinev, and Marcelo Chierighini make for one of the strongest groups of 100-meter specialists on any ISL team.

Anna Hopkin, Leah Neale, Annika Bruhn, Ting Wen Quah, and Bella Hindley make a solid sprint crew for the DC Trident, and Neale, for her part, can also swim a fantastic 200 and 400 freestyle. Abbey Weitzeil, Anastasia Gorbenko, Valentine Dumont, and Maddie Wilson comprise a strong crew for the LA Current, and could combine for the fastest women’s 4 x 100 freestyle relay of the meet. The Condors bring in a lot of stroke-specialists for the women’s freestyle, but they’re still quite strong with the likes of Erika Brown, Kelsi Dahlia, and potentially Olivia Smoliga in the sprints, and Leonnie Kullman and Kathrin Demler in the 200 and 400 races. The Aqua Centurions, meanwhile, bring in Mariia Kameneva, Silvia di Peitro, Holly Barrett, and Federica Pellegrini for freestyle, a very fast crew, present company considered.

The DC Trident shine in the women’s IMs thanks to Bailey Andison and Szuszanna Jakabos on the women’s side, and Andreas Vazaios and Jay Litherland on the men’s side. Aqua Brings in Chase Kalisz, Thomas Ceccon, and Rika Omoto… a solid crew, including the Tokyo 2020 Olympic gold medalist in the 400 IM, but Aqua is lacking in depth. The LA Current will rely on Tomoe Hvas, Sarah Franceschi, Anastasia Gorbenko, Beryl Gastaldello, and Abrahm DeVine to get the job done. The Condors are more of a mixed bag in that they very adequately cover the 100 and 200 IMs, but are lacking in the 400. Caeleb Dressel, Beata Nelson, Marcin Cieslak, Mark Szaranek, and Angel Martinez are all great in the shorter IMs, but the 400 IM could represent a chink in their bird armor.

It’s hard to bet against the Cali Condors in any of the relays this weekend, save for the 4 x 100 freestyle relays on both the men’s and women’s sides. The men’s and women’s ‘A’ relays from the Aqua Centurions have each been faster than the ‘Dors this season–granted, each team has only swam one match. Then there’s the LA Current women, who are probably most likely to win the women’s 4 x 100 freestyle relay.

The Aqua Centurions could piece together a formidable mixed 4 x 100 medley relay, but they’re unlikely to beat the Condors ‘A’ team–the Condors could realistically place 1-2 in this race, though LA did get the better of the Condors’ ‘B’ team in Match 2.

The medley relays are likely to go to the Condors as well, though the Aqua Centurions could at least prevent them from getting a 1-2 finish on both the men’s and women’s sides.

THREE US teams and we can’t watch it on CBS in the US. Yuck.

How to watch this match for free? I don’t think it’ll be on CBS and CBC right?

Is it worth buying it for $4 on the ISL site? Kinda considering it.

Are there replays on the ISL site? I have a commitment until 1 hour into the match, so would rather not pay for it unless I can go back and watch the beginning.

If I’m not wrong there’s option for per match/per 24h, you could look into the fine details. I think you get replays

I can’t wait to see Coleman’s race. I think he probably had a full taper, but if he wasn’t tapered or had a slight taper, it would be faster than the butterfly world record for 50m and 100m backstroke. I think you can see the moment.

Idk if he tapered but he did talk about shaving after day 1 in an interview.

Who has better underwaters? Smogs or Beata?