Sarah Sjostrom Out of Remaining ISL Regular Season; Will Return for Playoffs 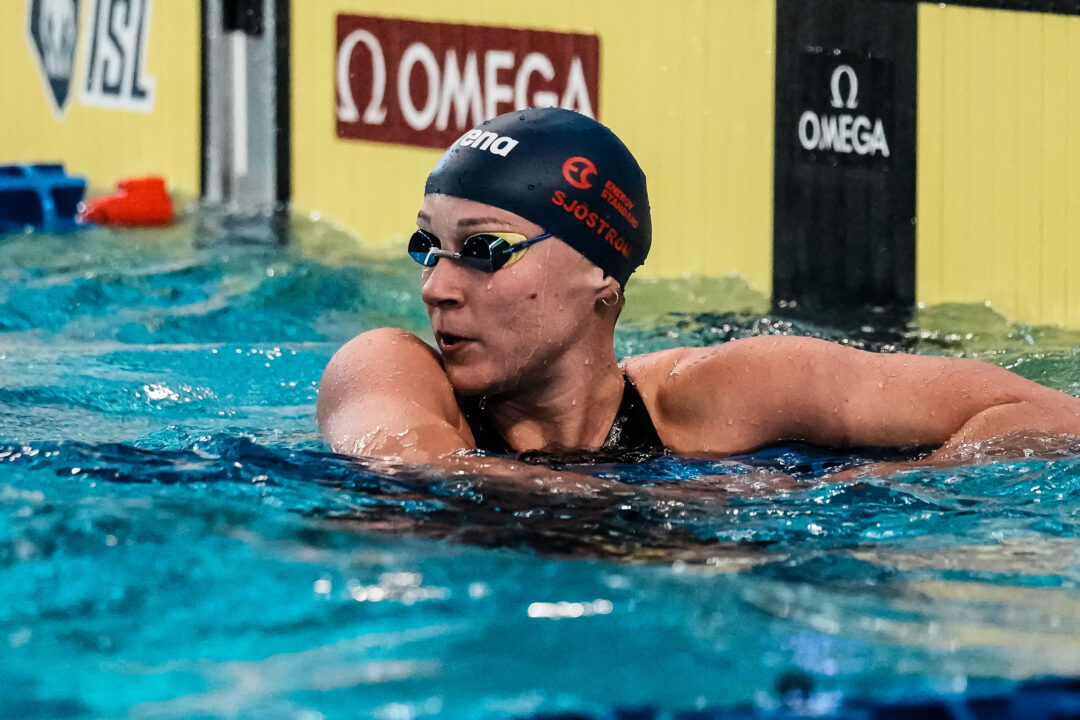 Energy Standard’s Sarah Sjostrom will miss the remainder of the regular 2021 ISL season to rehab in Stockholm with her coaches and trainers. Current photo via Mike Lewis/Ola Vista Photography

Energy Standard’s Sarah Sjostrom has announced she will take a break from racing for the remainder of the regular 2021 International Swimming League season to rehab with her coaches and trainers in Stockholm. She wrote on social media:

“Going back to Stockholm tonight. Grazie e arrivederci Napoli. Mi piace sempre tornare qui.
“It’s was amazing like always to race with my team. We’re so many different swimmers from countries and cultures all over the world. But the team spirit we create together is fantastic. ⚡️💙
“@energystandard still have a few more @iswimleague competitions in Naples this month. But me and the staff in my team+my rehab team back home have earlier this year decided it’s better for me at this point to go back to training/rehab to make sure I’m not overloading my elbow early in the season.
“But I’ll be back to a very busy racing schedule again in November/December. ⭐️”

Sjostrom broke her elbow in February 2021, slipping on the winter ice while visiting a friend in her native Sweden. She had surgery the next day and began a three-month rehabilitation period. Sjostrom raced for the first time in four months at Mare Nostrum’s Canet-en-Rouissillon stop on June 1-2, where she swam the 50 free and 100 free. Two weeks earlier she had told Swedish media that she didn’t expect to be able to defend her Olympic title in the 100 fly at the Tokyo Olympic Games, as she had lost 4 centimeters of muscle mass in her right arm and her stroke was “unbalanced.”

Sjostrom went right from Tokyo to Napoli and competed for Energy Standard in its first two matches, racking up a total of 138 points to lead the league MVP standings through the first three matches. She won the 50 free, the 50 fly, and the 50 free skins, placed second in the 100 free and was on a couple of ENS relays in Match 1. In Match 3, she also won the 50 free, 50 fly, and 50 free skins, was runner-up in the 100 free, and was on two winning relays.

Energy Standard head coach Tom Rushton told SwimSwam that Sjostrom’s agreement with the federation was that she would participate in two ISL matches with a reduced competition load (meaning no 100 fly), then return to Sweden to continue rehab. Even though she broke the ISL record in the 50 free with 23.17, she is still not back to full strength and needs the rest of the month to complete her rehab work.

Sjostrom will leave Energy Standard in good shape. The club has amassed 2 match wins to lead the team standings with 8 points. With two matches left to play, even if they finish in fourth place they will wrap up the regular season with 10 points, which is what it took in 2020 to make the playoffs.

Moreover, ENS still has Siobhan Haughey, the MVP of Match 3 (outscoring Sjostrom by .5), in freestyle and Anastasiya Shkurdai and Madeline Banic in butterfly, to hold down the fort until Sjostrom returns for the playoffs. In addition, there are still six Olympic medalists who haven’t yet joined the team: James Guy, Femke Heemskerk, Boglarka Kapas, Florent Manaudou, Evgenii Rylov, and Emily Seebohm.

While the team looks to be in good shape without her for the next two matches, Sjostrom’s decision to withdraw temporarily takes her out of the running for season MVP. She earned a bonus of $8,000 for winning the MVP award in Match 1 but as the leading MVP point-scorer for the season so far, she could have earned a bonus of $100,000 had she remained on top. She could still earn a minimum bonus of $10,000 if her total points for the season rank her among the top-10.

I think she wants gold medals later in the year, something she could not get in Tokyo.