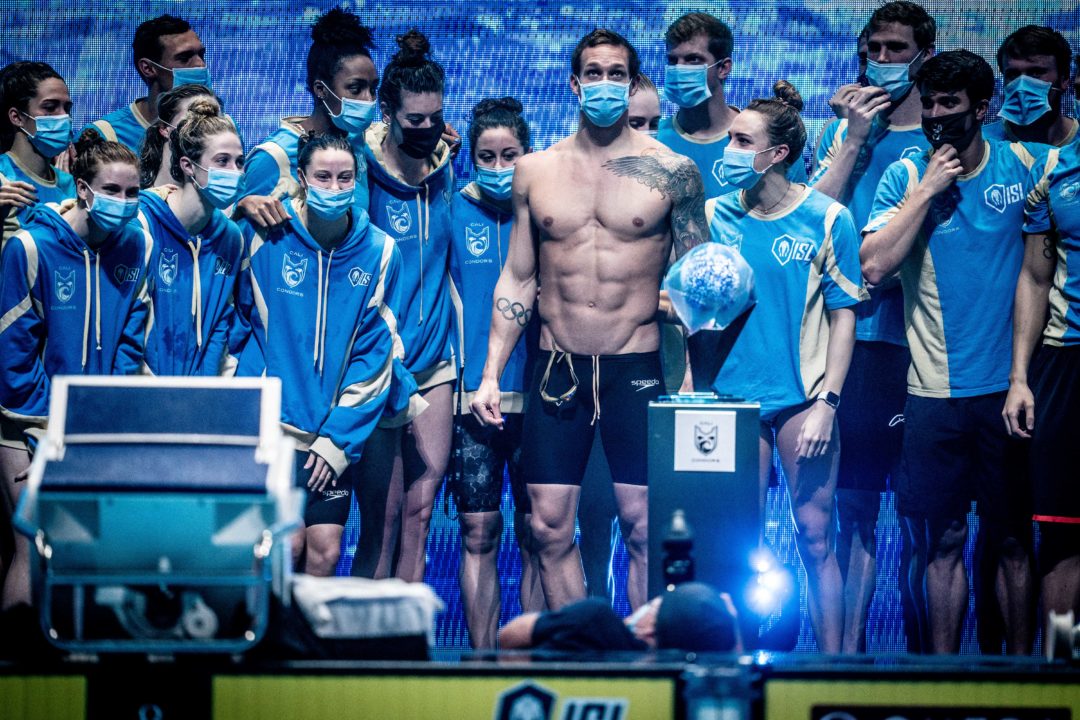 Last year, there was $3.780 million in prize money up for grabs in just race placements. This year, $5,236,400 total will be dispersed for racing prizes. Stock photo via Mine Kasapoglu

The International Swimming League announced $6.9 million in cumulative season prize money distributions for season 3, the most in the nascent league’s history.

That follows the news that this season’s “solidarity grants” have been slashed by 50%, representing a $2.6 million budget cut, but that racing-specific prize money will increase this year.

This season, the league will again dish out team bonuses at the conclusion of every match. All 28 members of each of the top teams in each regular season/playoff match, along with the top four grand final teams, will receive an equal payment based on the team’s placing.

There will also be top individual MVP bonuses available at each of the 17 matches this season. Last season, the top three finishers in the MVP ranks at each meet in each phase of the season received bonuses, whereas this season, it’s just the top finisher.

The top 10 ISL athletes at the end of the season, based on cumulative points, will be awarded a combined $430,000, with the top finisher receiving a $100,000 prize. This is the same structure as last year.

Prize money this season appears to be effectively same, minus overall finish bonuses, with the bulk of the money increase coming from per-race prize money.

Schrodingers Prize Money at this point?

Same. Watching this season go on without pay is a slap in the face.

I don’t like that they’ve done away with 2nd and 3rd MVP prizes. A big issue in swimming is that only Olympic gold medalists really make any money, and ISL was supposed to help with that. Focussing all the money on only the best swimmer is kind of counterintuitive.

The league is set up to pay the best teams a lot more than the bad teams, too.

This is typical in all professional sports. Why do you have an issue with swimming doing the same?

I’m gonna refer you back to Sub13’s comment: “A big issue in swimming is that only Olympic gold medalists really make any money.”

And the bonuses playoff or championship-winning teams get in other professional sports are nowhere near the percentage of overall compensation as in the ISL.

Swim fast and you will make money. Lots of up and coming names on top 10 MVP list that are not gold medalists and enjoying winnings.

So you think good teams should be paid similar to bad teams?

An interesting idea would be to allow retention of only 5 swimmers in the draft vs 15.

Comparing to other leagues doesn’t really work, because in this system, everything is being funded by one owner.

In other sports leagues in the Americas, while the OWNERS of different teams don’t make the same amount of money (and, in fact, owners of bad teams sometimes make more than owners of good teams, depending on market size), the ATHLETES on all teams make approximately the same from salaries. In the NBA, for example, the lowest salary aggregate is $92 million. Highest is $173 million. So that’s less than double. Also, the team paying $92 million isn’t the worst team in the league. In the NBA last season, the salaries of the worst teams in the league was $129 million, while… Read more »

Gonna mostly go with “yup, what Braden said.” And I just wanted to piggyback on his point that the worst team in the ISL will never beat the best team – it’s super obvious in the rec league I coach for where we have 60 scored events, it’s almost that “the law of large numbers” takes over. If one team has better swimmers in terms of both top end quality and overall depth, you’re only gonna get so many upsets from the bad team and so many poor swims from the good team. (And because of that, and you’re on a bad team, there’s pretty much nothing you can do to get those team bonuses.)

I don’t even know… Read more »

They should probably pay everyone from last year first

Yeah. Otherwise it is called a Ponzi scheme.

Wonder if they’ll actually be paying everyone this time