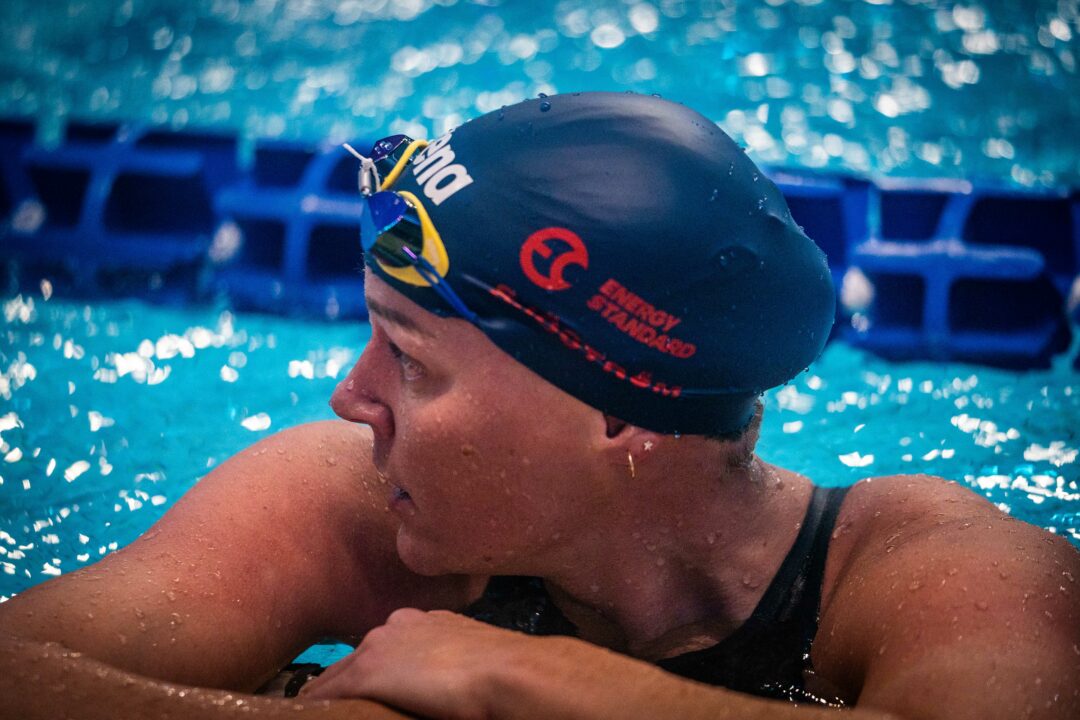 The season one ISL champions, Energy Standard, once again found themselves on top of the match team standings with their first match win this season. Taking second place by a slim 15 points were the Toronto Titans, who made many strategic point moves in the team standings. The Aqua Centurions found depth in their stronger events while the DC Trident found themselves in numerous tiffs with stolen jackpot points.

The big surprise from the Toronto men came in both the individual and skins 50 fly events. Marius Kusch and Grigori Pekarski nabbed a 1-3 finish to upset front-runners Aqua’s Szebasztian Szabo and Energy’s Chad le Clos, picking up 18 total points including 3 from jackpot.

Kasia Wasick, traded from the Cali Condors, advanced through all three rounds of the 50 free skins to secure 25 points towards Toronto’s team score, putting them 20 points behind Energy heading into the men’s 50 fly skins. There, Kusch and Pekarski secured 13 points into round two. While individual champ Kusch was touched out for second place, Pekarski picked up 9 points en route at least a 7-point pick-up in the final round.

Sarah Sjostrom proved to the arena why she is the skins queen by leading round two and winning round three of the women’s 50 free skins. Toronto’s Wasick gave Sjostrom a good competitive edge during rounds one and two and the first 37.5 meters of round three. But Sjostrom utilized her sprint endurance to out-stroke Wasick in the final meters, securing another skins win for Energy Standard.

Sjostrom also took a dominant win in the 50 fly earlier in the session. Her first butterfly strokes of ISL season 3 put together a reputable time of 24.98. Sjostrom was so dominant on the field that she had picked up 10 jackpot points, totaling 19 individual points. Her teammate, Maddy Banic, finished in 25.32, securing 7 points to cumulate a 26-point event pick-up.

In the aforementioned men’s 50 fly skins, Toronto’s Pekarski advanced to the final round alongside Energy’s Chad le Clos. It was tight battle through the 23.8-second race. Yet it was le Clos who proved himself a skins master by edging out Pekarski 23.82 to 23.88 and securing Energy Standard’s win with the 14-point victory.

The Aqua Centurions also flexed men’s sprint depth to kick off this third season. Alessandro Miressi and Thomas Ceccon went 1-2 in the men’s 100 free to give Aqua a 4-point edge over Toronto to remain in top-three contention. Ceccon was also victorious in the 100 IM, edging out DC’s Andreas Vazaios by two one-hundredths, 51.95 to 51.97. His efforts were good enough on the rest of the field to pick up 6 jackpot points for a total of 15 points.

The men’s 400 IM was a solid showing for Aqua was well, with World junior record-holder Ilia Borodin and Olympic champion Chase Kalisz picking up 20 last-minute points before skins.

DC Trident finished in fourth place during match one with 311.50 points. On day two, DC bested three straight second-place finishes, followed by an additional two runner-up finishes and three third-place finishes. Yet the team faced many mid-match point challenges which they can observe and improve upon for future matches.

In the mixed 4×100 medley relay, DC Trident finished in third place, ahead of Energy Standard. Yet their second relay wound up in eighth place. DC picked up 14 relay points with their 3-8 finish while Energy’s 4-5 finish was worth 18 points.

In the women’s 50 free skins, Anna Hopkin qualified fourth into the second round, but got jackpotted in the second round. For the men’s 50 fly skins, newcomer Ryan Hoffer and IM specialist Andreas Vazaios finished 7-8, but were jackpotted their potential 3 points for finishing. Hoffer and Vazaios were just as underwhelming in the individual 50 fly race as well, placing 6-8 for only a 3-point pick-up due to stolen jackpot points. In the women’s 50 fly race as well, Ting Wen Quah and Klaudia Nazieblo both were jackpotted. Quah also lost points from jackpot in the 100 IM.

While Vazaios was able to secure 7 points with a second-place finish in the 100 IM, Olympic runner-up Jay Litherland placed 8th with a one-point deduction for jackpot/time penalty. Litherland also finished 7th in the 400 IM, but was able to secure 5 total points from the top four halfway check-point bonus.