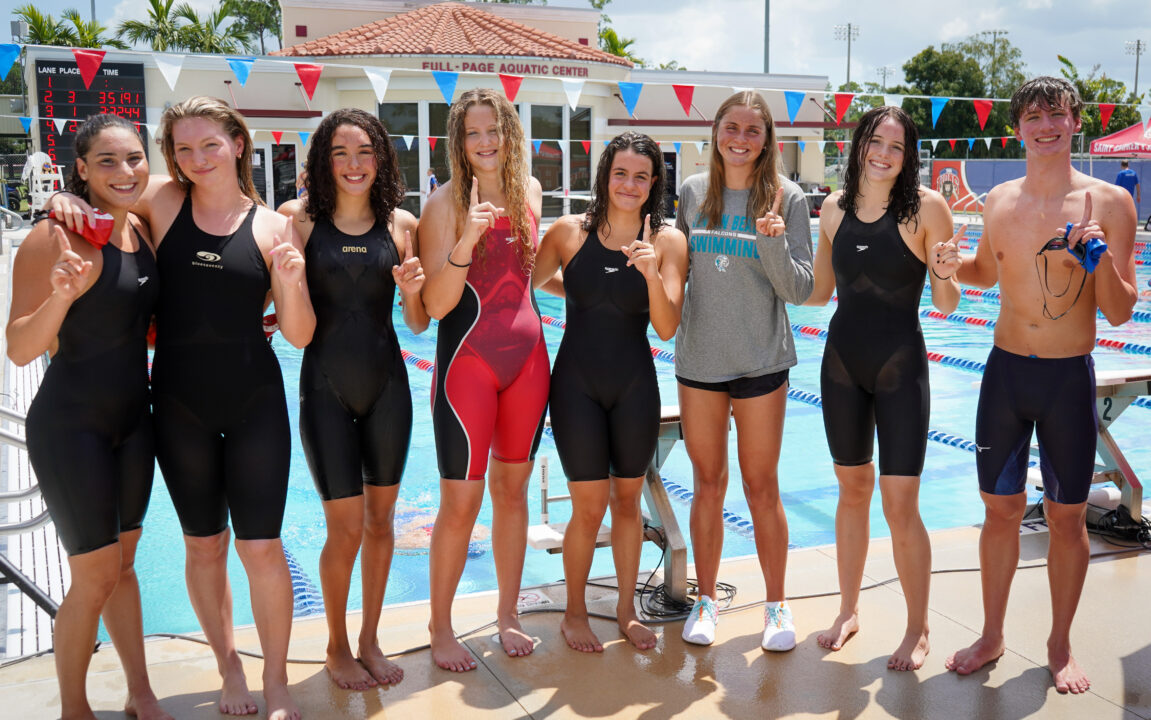 The King’s Academy pool is set up in short course meters through the summer season (they don’t have a 50 meter pool for the traditional long course season), and will soon shift the pool back to short course yards to prepare for the upcoming Florida High School State Championship.

But that wasn’t before they hosted a record-fest meet on Saturday.

“I knew if we could bring some of our local South Florida talent together, we could have a very fast early season meet,” said Jonathan Zuchowski, the TKA host. “They were amazing. Kids were up cheering for everyone.”

Zuchowski says he hopes to expand the meet in future seasons and invite other south Florida powers like Pine Crest in future years.

The meet was capped at 5 schools and 120 swimmers due to COVID-19 restrictions.

Four of the five teams in the meet had swimmers break National Records, with Lake Worth Christian being the only exception. These short course meters records have really begun to rise in prominence in the last few years – though they don’t often get state championship-caliber tapers, the names of swimmers who held the records broken on Saturday are of a high caliber. That includes previous record holders like 4-time Olympic medalist Amanda Weir, teenage Olympic Trials finalist Matthew Fallon, and NCAA freshman phenom Destin Lasco.

Florida is one of the first states to begin their high school season, and also one of the first to conclude it. The regular season in Florida ends on October 16 with state championship meets running in early November – just 61 days away.

Gersper as just a sophomore is already the defending 1A champion in the 100 fly and 100 back for Saint Andrew’s School, one of the state’s storied programs and the 1A runners-up last season. Pelaez is also just a sophomore, but already has 4 state titles in Class 1A: she is the two-time defending 50 and 100 freestyle, races that she won in both 2019 as an 8th grader and 2020 as a 9th grader.

Fantastic! Does anyone know why our California High School Season is in the Spring? So annoying.

Because water polo is in the fall.

An incredible meet — we were fortunate to be there. (Pro tip to the capital improvements committee at The King’s Academy: Please install some kind of sun awning, tent, or roof over the bleachers. Fans were getting sun from above, sun reflected off the aluminum, and sun reflected off the surface of the pool!)

So much fun getting to watch these kids swim fast early in the season! Congrats to all!

Was awesome to be racing with them today