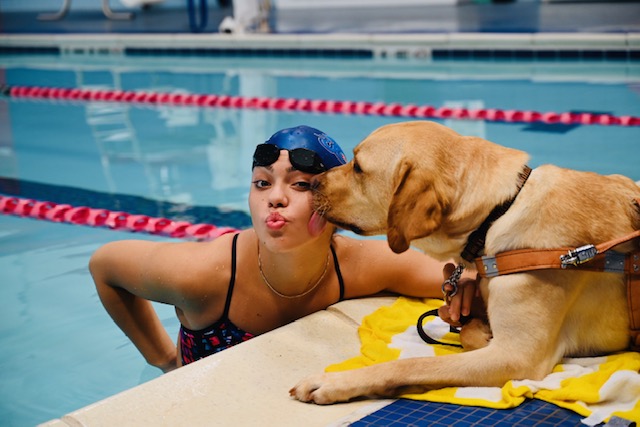 2 of the 9 world records that fell on day 2 of the Paralympics were broken by 17-year-olds Anastasia Pagonis (above, 400 free) and Gia Pergolini (100 back.) Archive photo via Anastasia Pagonis

The Netherlands’ Lisa Kruger warmed up the pool by taking down her own SB9 women’s 100 breast Paralympic record from 2016 with a time of 1:13.83, shaving about 1.5 seconds off the previous mark.

Moments later, Kruger’s countrymate Chantalle Zijderveld demolished her own world record from June with a time of 1:11.23.

The third and final world record to fall during prelims was in the S13 women’s 100 back where Australia’s Kate Dedekind fended off world record holder Carlotta Gilli of Italy to win heat one with a Paralympic record time of 1:07.38.

Then in heat two, USA’s Gia Pergolini shattered Gilli’s world record from the Para European Championships with a time of 1:05.05.

But then, American teenage phenom Anastasia Pagonis blasted a 4:58.40 to earn the top spot in the S11 women’s 400 free going into finals and break the minutes-old Paralympic record. Pagonis came within 2.5 seconds of her own world record in this event, which she set at the U.S.  Paralympic Trials in June.

Australia’s Rachel Watson broke the S4 women’s 200 free Paralympic record with a time of 1:35.27, taking more than 2 seconds off the record set by USA’s Kay Espenhayn in 1996.

After setting the S5 100 free world record off a split in the 200 free final on day one, Great Britain’s Tully Kearney did it again. She took out the first 50 in 35.83 to shave .05 off the 50 free world record and finished with a time of 1:14.39 to crush her own world record from one day ago by nearly two seconds.

The third world record of the session was clocked by Columbia’s Nelson Crispin Corzo in the SM6 men’s 200 IM. He touched the wall at 2:38.12 to shave .35 off Sascha Kindred’s world record from the 2016 Paralympics.

19-year-old Summers-Newton of Great Britain reclaimed her world record in the SM6 women’s 200 IM. Ukraine’s Mereshko had broken the record which Summers-Newton set in 2019 by .34 with a time of 2:56.90 in prelims.

But in finals, Summers-Newton pushed hard on the breaststroke leg, going from 4th place to 1st. She blasted a 2:56.68 to crush Mereshko’s hours-old world record and reclaim it as her own.

The Netherlands’ Zijderveld also took down the world record/Paralympic records she set in prelims in the SB9 women’s 100 breast. She shaved .24 off her record from prelims with a time of 1:10.99 to win gold by about 3 seconds.

Belarusian Paralympic legend Ihar Boki won his 13th career gold Paralympic medal with a world record time of 56.36 in the S13 men’s 100 back.

AWESOME Swims for ALL RECORDS!!!

CONGRATULATIONS to ALL Record Setters!!!