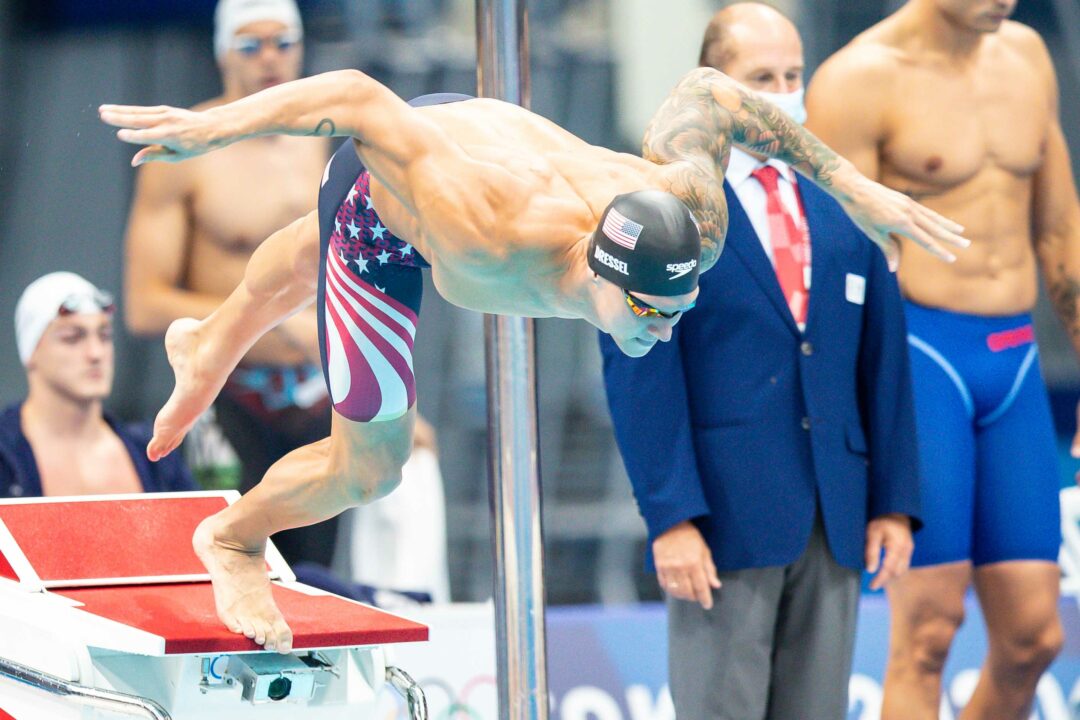 Just hours after his Olympic gold medal performance in the 100 freestyle, Caeleb Dressel will be back in the water on day 6 for the men's 100 butterfly. Current photo via Jack Spitser/Spitser Photography

We’re nearing the end of the swimming portion of the Tokyo 2020 Olympic Games but there’s still lots of action to be seen. Day 6 prelims will feature the men’s 100 butterfly, the women’s 200 backstroke, the women’s 800 freestyle, and the mixed 4×100 medley relay.

Fresh off a gold medal performance in the men’s 100 freestyle, Caeleb Dressel will be back in the water for the 100 fly. Dressel is the favorite to win here and will likely have a bit of an easier time than he did navigating the absolutely loaded field in the 100 freestyle. Dressel threw down a 49.50 at the 2019 World Championships and will go in as top seed by more than half a second.

Following Dressel in the psych sheets in fellow Olympic gold medalist Kristof Milak who recently topped the podium in the men’s 200 butterfly. Milak holds a 50.18 entry time here and will be among Dressel’s biggest competition in the event. Dressel’s fellow 2019 Worlds medalists Andrei Minakov and Chad le Clos will both be in on the action during the 100 fly prelims, hoping to pick up their first individual medals of the meet.

Matt Temple was one of the biggest surprises at Australian Trials this year when he threw down a 50.45 Aussie record to earn him 3rd seed at this meet. He, along with French veteran Mehdy Metella, Bulgaria’s Josif Miladinov, USA legend Tom Shields, and Great Britain’s James Guy will all be present, vying for a spot in the semis.

In the women’s 200 backstroke, we will see many of the same faces that we saw in the 100 back a few days ago. Among those completing the double will be 100 back silver medalist Kylie Masse, Italy’s Margherita Panziera, US debutant Rhyan White, and of course 100 back silver medalist Kaylee McKeown. McKeown will be looking to pull off the double backstroke win in Tokyo and in a Regan Smith-less field will have a shot at taking the 200 backstroke for herself which currently sits at a 2:03.35 from Smith in 2019.

Taking a look at the women’s distance event, Katie Ledecky will be swimming her 4th and final individual event in Tokyo. Ledecky won the women’s 1500 freestyle on day 5 of the meet which was an improvement upon her de-throning in the 400 free and a podium miss in the 200 free. It was Aussie freestyler Ariarne Titmus who managed to top Ledecky in the 400 free and the duo will be back at in the 800. The stakes are high for both Titmus and Ledecky here as Ledecky has a shot at becoming the 3-straight Olympic champ in the event while Titmus has a shot at becoming Australia’s first-ever woman to win 3 individual golds at an Olympic Games.

Fresh off an Olympic bronze medal performance in the 1500 freestyle, Sarah Kohler will be back in the water and hoping to find her way onto a second podium. Adding to the action is 14-year-old American Katie Grimes in her first-ever Olympic race, Russian record holder Anastasiia Kirpichnikova, Aussie 1500 finalist Kiah Melverton, and Quadarella’s Italian compatriot Martina Caramignoli.

It won’t be a runaway for the 2019 champions and world record-holders, though, as Australia continues to be on fire at the Games, along with the Russian Olympic Committee, and Great Britain.

Shane Gould won three individual golds in Munich plus a silver and bronze So Ariane could equal the gold count with 3 if she wins the 800m which will be very tough to do.

Shane had no relays (though she swam in some) to inflate her medal tally.

Unlike Arnie – Shane would probably have been satisfied with a bonus relay bronze.

it’s crazy what shane gould did, as a FIFTEEN year old! (and then also is the world’s oldest winner of Survivor!)

A really stern test here for AT, both from physical exhaustion and the shock/disappointment of the 4×2 relay.
Now back again – same day – for the 800. Wishing her all the best. Don’t seriously think she can beat KL, but would love to see her get a shot at the final.

Also, I want to apologise to Leah Neale for the negativity I expressed about her after the 4×2 heats.
Certainly felt bad about that as I watched her obviously v upset after the final. She rose to the occasion very well, under massive pressure (diving in behind, and knowing KL was close in 3rd – an irresistible force in relays).

What? I expected Zac in there… but the other 3 are completely unexpected.

Who do we think will do the final?
Mitch, Zac, Emma, Cate?
Kaylee, Zac, Emma, Kyle maybe?

or Kaylee, Zac, Matt Temple, Cate. But doubt they’ll leave Emma out if they think they’ve got a medal shot.

Brianna and C2 must have some blackmail pics of the coaches

I actually and not surprised at this heat line up for Australia. I don’t think it’s a bad move really. Not like yesterday

Nothing too exciting here but interesting to see how overworked swimmers like Ledecky & Titmis might manage things.

I’m very worried for Ariarne. I think the loss today would have got in her head. Yesterday I was thinking she could legitimately challenge for the 800. Now I’m doubtful she will medal at all.