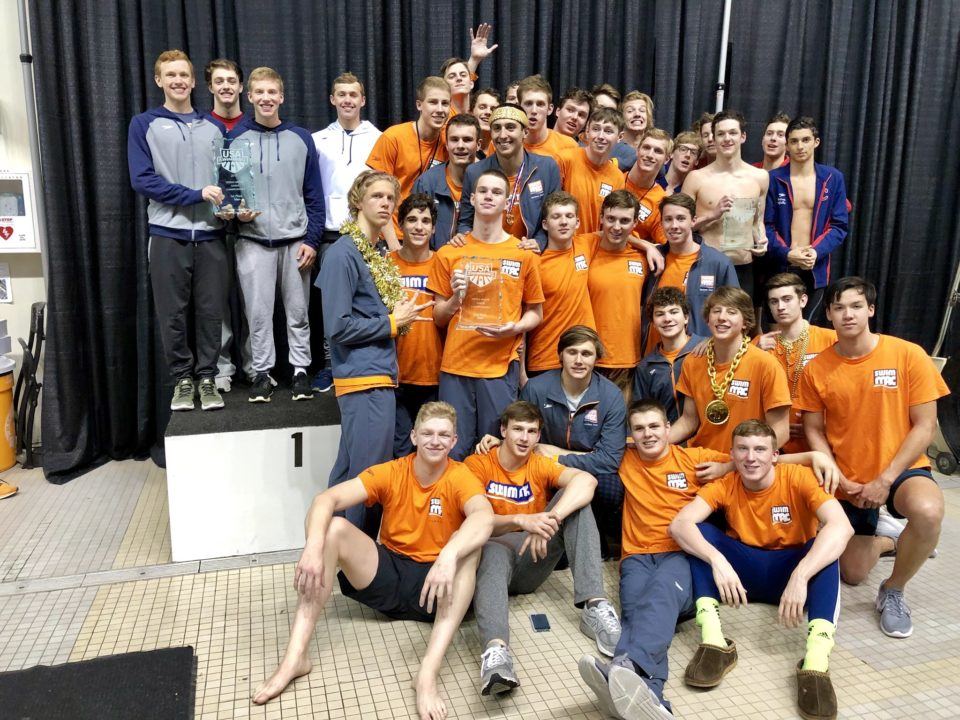 SwimMAC held their third sanctioned swim meet post-quarantine over the weekend. Tim Connery, the #4 recruit in his class, finished the meet with 3 event wins. Archive photo via Mason Manta Rays

Tim Connery, the #4 recruit of the high school class of 2021, won 3 events at SwimMAC’s Intrasquad meet after announcing that he switched his verbal commitment from Michigan to the University Texas yesterday. This intrasquad is the third meet hosted by SwimMAC Carolina since the coronavirus restart. Their last intrasquad took place in August.

Connery won the 100 fly by over 4 seconds with a time of 47.92, about 1 second off of the best time that he swam at last year’s Winter Junior Nationals. He also won the 200 free (1:36.78) by a margin of nearly 9 seconds this weekend. Although neither of his swims were career best times, this was his first sanctioned swim meet since the coronavirus restart.

There was a close race for second place in the 100 fly between Harrison Powe (52.44) and Payton Crawford (52.90) and both swimmers finished with best times.

It is no surprise that Rainey, who qualified for Trials in the 100m breast, also was the first-place female finisher  in the 100 breast (1:02.85). If she was ranked against all competitors in the event, Rainey would still place second behind 15-year-old Lane Bradshaw (1:01.28).

Junior Nationals swimmer Cam Abaqueta claimed 1st place in the 100 back in under 50 seconds (49.43), finishing 2 seconds before second place finisher Miller, whose time of 51.64 was another personal best. Avijit Das took 3rd place with a time of 54.86.

SwimSwam hates Michigan, UVA, and NC State and is so pro-Horns they just make up headlines to make Texas swimmers and recruits look even better….or they just goofed on the headline.

What do you mean? They loooooove NC State.

Nothing misleading here. He won 3 out of 3. Hook em Horns all day long, partner.

Duh. They updated the headline. That’s why all the previous comments were about him going best times. Him NOT winning at his intrasquad would be news. Maybe the UM fan in the other thread IS right about UT academics.

Your write. 129% correct. You’re analyst on there fan’s (Texas’s) academic Ability’s is perfect.

Aren’t none of those best times for him?

Checked meet mobile bc that time seemed way too fast was actually 1:48 still great time tho