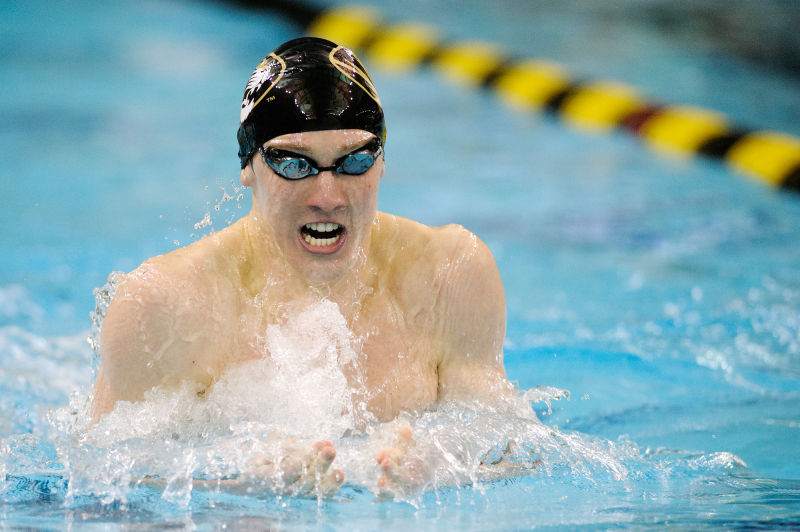 Mizzou's Sam Tierney swam right on past the NCAA "A" cut in his 51.68 100y breast time tonight. Current photo via Nick Schnelle/Columbia Tribune

Columbia, Missouri, November 21, 2014 – The Mizzou Invite continued today with the host team collecting all but two of the first place finishes during the finals session.  The top 5 team scores through tonight’s finals session shake out like this:

Freshman Sharli Brady of Mizzou then went on to win the 400y IM, eclipsing her 4:14.08 “B” cut from prelims, finishing tonight in 4:11.53. Johanna Gustafsdotti, a senior out of Florida International University finished second in 4:14.86, which also cleared the “B” standard. Senior Dani Spradlink of Mizzou placed third in 4:21.66.

The women’s 200y freestyle race lacked any “B” or “A” cuts, although Rachel Hayden (Mizzou) touched first in 1:48.72, which does surpass her previous best time thus far this year of 1:50.53 set in October.  Hayden was followed closely by teammate Erin Metzger-Seymour in a time of 1:48.76, while Gabbie Stecker from Illinois – Champaign rounded out the top three in 1:49.28.

Katharine Ross (Mizzou) swam a swift 59.43 in the women’s 100y breaststroke tonight, falling just short of the “A” standard of 59.12. Her previous fastest time of the Fall was the 1:01.15 she clocked at the Quad Meet in Lexington, KY two weeks ago.  Mizzou took the next two spots in the 100y breast tonight, as Abby Duncan (Mizzou) touched in second place (1:00.26) and Lauren Stoeckle claimed third in 1:01.38.

The men’s 200y freestyle also saw a 1-2 Mizzou finish, with sophomore Michael Chadwick touching in 1:34.47, a monster time for this point in the season.  This time would have placed eighth at last year’s NCAAs, yet here we are, only in NOvember.  Chadwick’s teammate, Andrew Phillips, finished  in 1:36.38 and Drury’s Daniel Rzadkowski earned third place in a time of 1:36.44.  Again, all three times cleared the “B” standard.

Senior Sam Tierney (Mizzou) lit up the pool during prelims by earning an NCAA “A” cut with his 52.02 time in the 100y breaststroke; however, he blasted an even faster time during the finals session, turning out a 51.68 to finish almost a full two seconds over the field.  Barring any out-of-this-world swims on incoming results at other invitationals, this is most likely the fastest time in the NCAA after this weekend.  In fact, Tierney’s 51.68 would have placed THIRD at last year’s NCAAs….THIRD…..and, it’s only November. In tonight’s final, Mizzou swimmers ended up in the second and third spots (Mark Conroy  in second 53.65 and Igor Kozlovskij in third 53.97).

Within the men’s 100y backstroke event, Henrique Machado of UNLV won big with his time of 46.39; that time puts him in at the number one in the NCAA (for now….).  Machado was followed by West Virginia’s Andrew Marsh 47.05, also a studly time, and Sean Feher with a solid 47.37.

Competition continues tomorrow with prelims beginning at 10:00am Central

you forgot men’s backstroke very notable swim by UNLV’s Henrique Machado with a 46.39

Mizzou– movin’ on up!!! What’s up with all these fast times all over the country for both men and women? I thought mid-season taper meets were usually in December??

Reason for the Nov meet is that it allows kids to go home and enjoy Thanksgiving, without possibly messing up the taper.

Congrats to Sam and Mizzou.