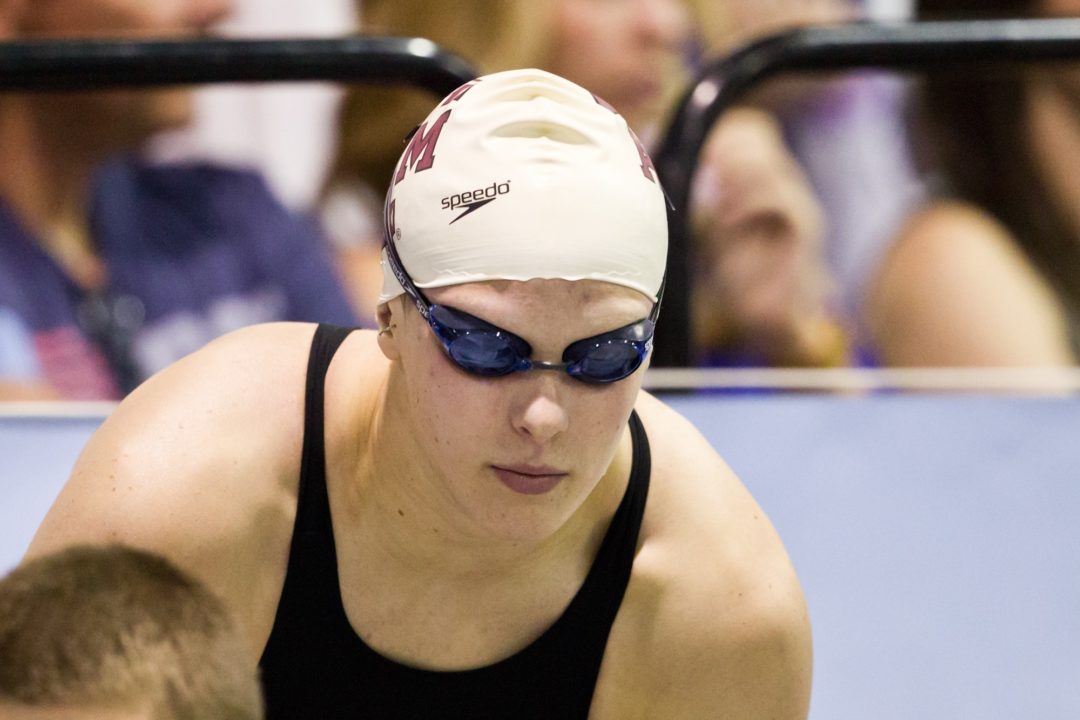 Sarah Henry, who swam an NCAA A cut in the 400 IM, and the Texas A&M women are leading the Stanford women through day two of the Art Adamson Invitational, but the Stanford men are dominating the field. Archive photo via Tim Binning/TheSwimPictures.com

Lights going out mid session could not stop Stanford and Texas A&M from swimming fast on night two of the Art Adamson Invitational.

Simone Manuel just keeps getting better. Manuel, a freshman, dropped almost a full second from her time in prelims, 1:42.03 in finals compared to 1:43.01 in prelims. She beat her teammate, Lia Neal by almost 2.50 seconds. Neal finished second with a 1:44.52.

Ellen Quirke of Texas A&M was a distant third, finishing in 1:46.25. Another Stanford Cardinal, Grace Carlson, finished fourth with a 1:46.80.

Manuel wasn’t the only one with an NCAA A cut time, however. Sarah Henry of Texas A&M swam a 4:04.92 in finals. Improving by almost seven seconds from her prelim time.
Henry was racing the clock by going into the freestyle, and split a 55.17 in her 100 freestyle. Her teammate, Bethany Galat, was second in 4:09.58, but was not much of a factor during the race.

The men’s half of these races was not quite as exciting. Drew Cosgarea won the 200 freestyle for the men in 1:36.35, followed by his teammates, Tom Kremer and Thomas Stephens.

LSU took second in 1:27.98 but was not competitive because of their backstroke and butterfly legs. Logan Rysemus’ 22.52 split on the backstroke was not enough to keep up with Nolan. Although Marco Gonzalez did split a 19.64 as the Tigers anchor.

Max Williamson won the 400 IM for the Cardinal. Williamson was just under a second away from the NCAA A cut. Williamson touched in 3:43.36.

The Stanford women got another A cut in the 800 free relay. Julia Anderson, Maddy Schaefer, Lia Neal, and Simone Manuel touched at 7:01.22. Not one member of the relay was split over 1:47, and Manuel anchored with a 1:42.96.

Texas A&M’s A relay did not have the speed to keep up, as right from the get go Stanford jumped out to a lead of over a second and a half. Anderson led off with 1:46.39, giving Stanford the lead over A&M’s Sarah Gibson, who touched in 1:48.00 for the lead of split.

Stanford paced the field on the men’s side as well. Dave Nolan, Thomas Stephens, Drew Cosgarea, and Tom Kremer also ran away with the field, touching in 6:26.77. All four swimmers were under 1:38.

Hu added some time from her prelim swim but still won the event in 52:27. LSUs Amber Carter wasn’t far behind, however. Carter finished in 52.33.

Brittany Aoyama was first after prelims, 52.06, but added time as well and finished in 52.40. Lindsey Engel was fifth for Stanford in 52.59.

Her teammate, Sarah Haase, was also just off the a cut time. Haase finished an even tenth of a second behind Poppe in 59.31.

Sycerika McMahon, an Olympian from Ireland,  finished third in 1:00.45 for A&M.

Arizona State’s school record older in the 100 and 200 breaststroke, Thibaut Capitan, won the breast in 53.97, beating Silas Dejean of LSU and a pair of Grand Canyon swimmers.

Grand Canyon’s Mantas Auruskevicius and Youssef El Kamash touched in third and fourth in 54.53 and 54.58, respectively.

Hu scored her second victory of the session with her 100 backstroke performance. Hu added .04 to from her prelim times but still finished in 52.22.

Howe touched second for Stanford in 52.53.  Beryl Gastaldello finished in third for Texas A&M, touching in 53.12.

The top three finishers all added time from their time in prelims.

Nolan won another event for the Cardinal. Nolan added time from prelims as well, but it did not make a difference, as he swam to a 47.32 finish. TCU senior  Cooper Robinson finished second with a 48.20.

Liang finished third for Stanford with 48.27.

Great times all around. American Record on alert for Manuel in the 100 tomorrow! Depends on how much gas she has left at the end of the meet.

Correction – Howe is a freshman. Also add in by replacing Haase with Poppe the relay would be a full second faster. That’s a full freshman relay.

I saw that Poppe’s 50 breast split in the medley relay was nearly a second faster than that in the A relay; however, her reaction time was listed as “-0.70”. That seems like it would be a false start, no? Or perhaps it’s just mistaken.

Anyhow, I’m really rooting for her to get her cut in the 100 breast – so close!!! But I’m certain she’ll get it this season.

Not sure why that deserves a down vote…

Haters always down arrow when it doesn’t make sense. Hate comes naturally for them, sad.

Clearly something went wrong w/ the touch pads; there is no way Maddy Schaefer did a 26.29 on her backstroke leg. 26 low in the breaststroke is reserved for the elites like Molly, Breeja, Kasey…. Ms. Poppe has a way to go still before she can take Sarah Hasse’s place or Katie’s for that matter. Sarah/Katie already proven, not gonna happen this year…..

Exactly the time I expected for Simone Manuel.
She’s amazing!
And she scratched the 100 fly final to focus on the 200 free just like I expected.
Great coaching Mr Meehan.
I agree with Liquidassets about the 100 free.
How much gas will she have left in the tank on day 3?
We can expect something between 46.50 and 47 tonight. It will depend on whether she’s simply tired or very tired.

Janet Hu doesn’t swim crazy fast times this week yet but she’s very consistent and so important for most of the relays.
And Heidi Poppe is already very competitive at the best college level. She’s THE recruit CAL needed so badly… Read more »

While I’m not a college swimming specialist, I have now understood that all the teams have a fast mid-season meet with well rested swimmers. I presume the Art Adamson Invitational this week is that meet for Stanford. Does it mean there’s no chance to watch Miss Manuel at Winter Nationals in 2 weeks? Because if I remember well, we are used to seeing a few college teams swim at the US short course nationals. Cal was there last year. Again this year?

Both Cal men and women will be at the Georgia Invite this season from Dec. 4 – Dec. 6 instead of the Winter Nationals this year. Don’t think Stanford women will be there either.

Stanford’s final examinations roughly coincide with winter nationals – I would not expect Simone to “suit up” again until Pac 12s in February.

I would not expect anyone but high school swimmers at Winter Nationals – no money awards. I think this will be your best best in January for yards: http://www.chesapeakeswimclub.org/TabGeneric.jsp?_tabid_=70028&team=okcsc

I would not expect anyone but high school swimmers at Winter Nationals – no money awards. I think this will be your best best in December for yards: http://www.chesapeakeswimclub.org/TabGeneric.jsp?_tabid_=70028&team=okcsc