Thomas Ceccon Doubles Up With Italian Records In 50 Fly, 200 IM In Same Session 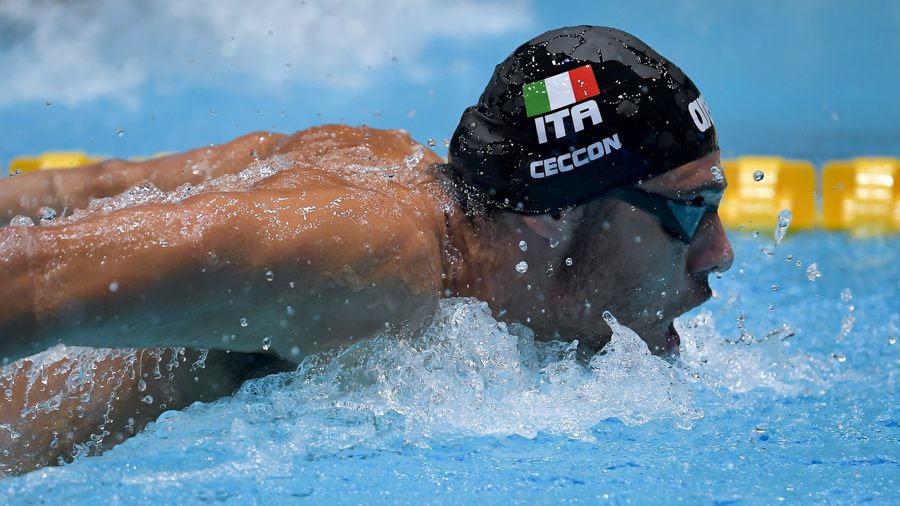 Ceccon ran down countryman Alberto Razzetti to win silver and break the National Record in the 200 IM before winning his semi-final in 50 fly. Current photo via Andrea Staccioli / Deepbluemedia / Insidefoto

Italian speedster Thomas Ceccon had a session to remember during Day 4 finals at the 2021 European SC Championships in Kazan, breaking a pair of National Records in the men’s 200 IM and 50 butterfly.

Ceccon started things off in the 200 IM final, using a strong freestyle leg to come back and claim the silver medal in a time of 1:52.49, running down countryman Alberto Razzetti (1:52.75) and Hungarian Hubert Kos (1:52.87) in the process.

Ceccon’s time broke his previous Italian Record of 1:53.26, set at the 2018 Italian SC Championships, going slightly faster on all four strokes to get under by more than three-quarters of a second.

Greece’s Andreas Vazaios won his second straight gold medal in the event in a time of 1:51.70.

Kos broke the European Junior Record, which previously belonged to Ceccon with his 2018 best time.

It was just under two hours later when Ceccon was back in the water in the semi-finals of the men’s 50 fly, winning the first heat in a time of 22.19 to lower the previous Italian Record of 22.47 set by teammate Matteo Rivolta in the prelims.

Prior to Rivolta’s swim in the heats, Ceccon had clocked 22.54, nearly breaking the previous record of 22.50 set by Marco Orsi during the 2021 ISL season. Prior to Orsi, the record belonged to Ceccon at 22.63 from January 2021.

The 20-year-old Ceccon beat Rivolta (22.27) head-to-head in the semi to qualify second overall into the final, trailing Hungarian Szebasztian Szabo, who established a new Championship Record of 22.00.

Ceccon now sits in a tie with Japan’s Takeshi Kawamoto as the 14th-fastest swimmer of all-time.

Ceccon has now won three medals through four days of the championships, adding a gold medal in the men’s 4×50 medley (swimming the heats) and a silver in the men’s 4×50 free, and will have a great chance to add a fourth tomorrow in the 50 fly final.

Ceccon is a great talent and today 200 IM final is an important test of maturity, with the fastest last 50m of the race. It’s going on the great work on raw speed by Italian coaches: after the historical Olympic silver medal in the 400 free relay and the bronze in the 400 medley relay, we’ve seen at these SC Euro Champs the great times of the 4×50 medley relay (with the fastest breaststroke split ever from Martinenghi), the amazing improvements of Lamberti in the 50 back and Zazzeri’s PB in the 50 free. Finally Ceccon and Rivolta under the previous Italian record in the 50 fly.