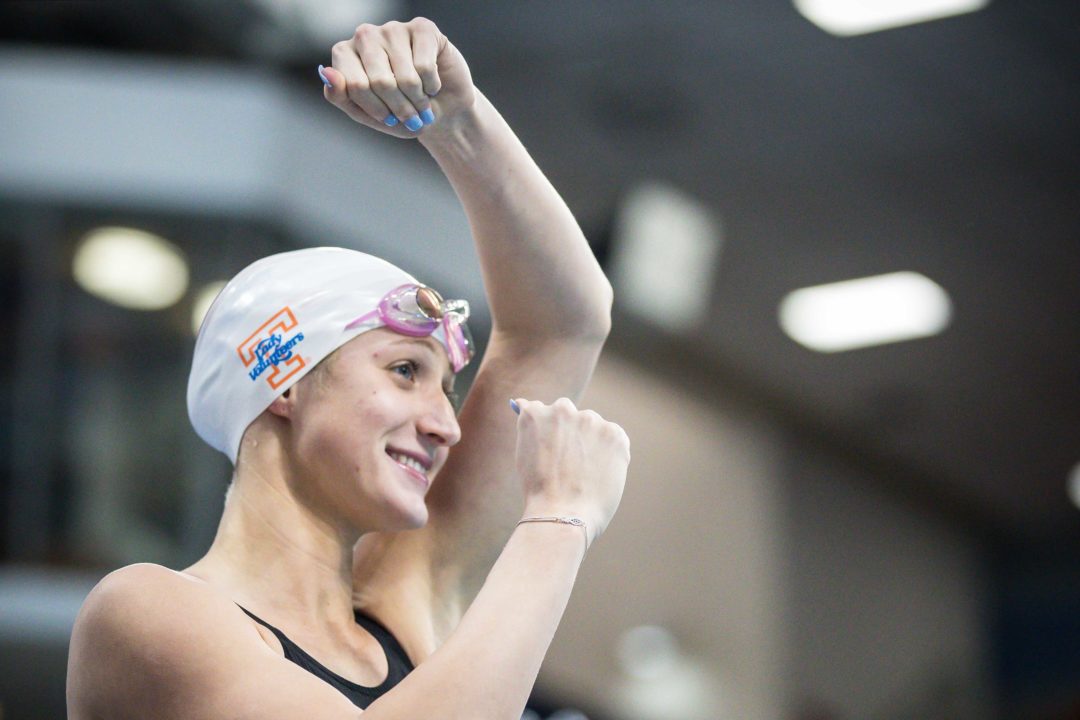 The Tennessee women defeated Georgia in the Gabrielsen Natatorium for the first time. The Georgia men handed Tennessee their first loss of the season. Archive photo via Jack Spitser/Spitser Photography

SEC Swimming fans saw some excitement in Athens on Saturday as rivals Georgia and Tennessee met for a dual meet. On the women’s side, Tennessee defeated Georgia in the Gabrielsen Natatorium for the first time. The Georgia men handed Tennessee their first loss of the season.

Another SEC Champ, Meghan Small, turned in a pair of victories for Tennessee. In the 200 IM, Small took a slight lead on the front half, but Georgia freshman Zoie Hartman took over the lead on the breast leg. Small then came from behind to win it, outsplitting Hartman by nearly a second on the closing split for a 1:58.42 to 1:59.19 victory. Small had also won the 100 back earlier in 54.10.

Teammate Amanda Nunan also put together a winning double. Nunan swept the distance freestyles, posting a 4:45.06 in the 500 and a 9:39.55 in the 1000. The Volunteer women remain undefeated.

Georgia SEC Champion Camden Murphy swept the butterflies to help the UGA men to victory. First up was the 200 fly, where he pulled away on the back half to beat teammate Harry Homans 1:45.97 to 1:46.46. Murphy was over half a second ahead of the field in the 100 fly, winning in 47.16.

ATHENS, Ga. – The 4th-ranked Lady Vol swimming and diving team remained unbeaten Saturday as they defeated Georgia’s 9th-ranked women’s team at UGA’s Gabrielsen Natatorium. On the men’s side, the 12th-ranked Vols fell to No. 8 Georgia.

In the 100 fly, the Lady Vols finished one through four with Trude Rothrock (53.14) placing second, Mallory Beil (53.86) coming in third and McKenna Morello (54.05) rounding out the group in fourth.

“This weekend was huge for us,” associate head coach Ashley Jahn said. “Georgia is extremely competitive and it brought out the best in us. We had seven different event winners and several 1-2-3 finishes today as well as winning both the 200 medley relay and 400 free relay. We took 14 of 16 events and got an even better feel for the pool. We’ll be back here in March for NCAAs and this will be valuable experience for us to fall back on.”

On the men’s side, the Vols won five events against the Bulldogs.

The day started with the Vols’ quartet of Matthew Garcia, Michael Houlie, Braga Verhage and Seth Thompson-Bailey winning the 200 medley relay with a time of 1:27.76. Garcia kept rolling as he picked up an individual win in the 100 back, turning in a 47.98.

The sophomore Dillard also finished second in the 200 breast, touching the wall in 2:00.16.

“Georgia is a great challenge,” Asti said. “We had some guys step up and swim well but we need to get back to work, sharpen up and prepare for Florida next week.”

In diving, Grace Cable made her return to the 3-meter springboard with a victory, scoring 314.18 points. The sophomore made it a clean sweep with another win on the 1-meter board, posting 279.23 points. Junior Ana Hernandez finished second on the 1-meter board, securing a dive score of 271.65.

For the men, junior Keegan Richardson finished second on both boards, scoring 287.55 on 1-meter and 319.88 on three. Freshman Nick McCann had a solid day as well, placing third on 1-meter with a score of 253.65. He finished fourth on the 3-meter springboard with a total score of 235.20.

“There were numerous highlights today from both the men and women,” head diving coach Dave Parrington said. “Grace made an excellent return to dual meet competition after being out of action on 3-meter for quite some time. With two wins against a strong Georgia diving squad, it made today even more special. Ana was strong especially on 1-meter and Emily Ann was very competitive too on the 1-meter board. I was please to see Keegan’s scrappiness to pull out a pair of second place finishes and also Nick who bagged an important third at a point in the meet when we really needed it.”

Tennessee returns to the friendly confines of the Allan Jones Aquatic Center on Saturday, Feb. 1 for senior day. The senior day festivities being at 9:30 a.m. and will lead into UT’s final dual meet of the season against No. 8/9 Florida.

ATHENS, Ga. — The eighth-ranked University of Georgia men’s swimming and diving team took down the undefeated No. 12 Tennessee Volunteers, 176.5-122.5, on Saturday in the Gabrielsen Natatorium, while the No.12 Lady Bulldogs fell to the fourth-ranked Lady Vols (7-0).

The Bulldogs’ win over the Vols boosts their season record to 5-1, while the Lady Dogs’ 199-101 loss drops their record to 4-2 on the season.

Junior Danielle Della Torre gave the Lady Bulldogs a boost and their first win of the day, finishing the 100-yard breast in 1:00.04.  Sophomore Callie Dickinson followed suit, earning a season-best 1:56.37 finish in the 200-yard butterfly. This was also Dickinson’s first win of season in the event.

“The ladies were a bit more tired than I thought,” said Tom Cousins Head Coach Jack Bauerle. “Tennessee is one of the best teams in the country, and Tennessee’s women are as good as I’ve seen since 2013. Danielle De Torre did a heck of a job today…and Zoie (Hartman) is going to be a force at the NCAAs for sure. On the men’s side— I’m really proud…Ian Grum is going to be a force. He sort of saved us a lot today…Camden (Murphy) is just so tough. I’ll tell you who was great today— Walker Higgins. His 200 free was maybe the best swim we had today…Overall, I like the character of the group, and they did a great job.”

The Bulldogs kickstarted the meet with four wins before the intermission, including 1-2-3 sweeps in two events. In the 1,000-yard freestyle, junior Greg Reed finished first with a season-best of 9:00.63. Sophomore Andrew Abruzzo (9:05.77) and senior Kevin Miller (9:11.32) rounded out the top-three in the 1,000-yard free.

The Georgia men dominated the 200-yard fly to sweep their second event of the day. Finishing first for the Bulldogs was junior Camden Murphy (1:45.97), with freshman Harry Homans (1:46.46) and senior Clayton Forde (1:47.59) finishing in second and third place, respectively.

Against his hometown team, Knoxville native Walker Higgins boasted a season-best (1:35.38) in the 200-yard freestyle to finish first overall. Higgins’ win allowed the Bulldogs to grab their first double-figure lead of the meet.

Prior to the intermission, freshman Bulldog Dillon Downing matched times (20.25) with the Vols’ Braga Verhage for first place in the 50-yard freestyle.

The Bulldogs kept rolling to start the second round of competition. Georgia natives Ian Grum and Jack Dalmolin grabbed the Bulldogs’ first two wins out of the break. Freshman Grum (44.70) took the 200-yard backstroke before Dalmolin, a junior, recorded a win in the 200 breast (1:59.09).

Hartman and Della Torre finished strong for the Lady Bulldogs with top finishes in their remaining events. In the 200 breast, freshman Hartman (2:11.12) came in second place with Della Torre (2:11.39) following in third. Hartman capped the day for the women with a second-place finish in the 200 IM (1:59.19).

Georgia rounded out the final events of the day with top finishes in the men’s 200 IM as Abruzzo and Forde finished first and second, respectively. The Bulldogs then took the top two spots in the 400 free relay to seal the SEC victory.

Up next, Georgia will welcome Emory in Athens on Saturday, Feb. 1, at 11 a.m. in the Gabrielsen Natatorium. The meet will be broadcast on SEC Network +.

No surprise? They’ve been swimming pretty well this year. One dual meet isn’t the end of the world.

Don’t mess with the Georgia men in Olympic year

How many current Georgia have a legit chance to make USA olympic team?

Vol men had three or four events where they didn’t score in the top 3–that hurts. Solid team but lacks a bit of star power and depth. Tennessee women have both and are very strong.

It is clearly not the same men’s Georgia team as last year. They are so much better than I & many others thought.

Oh shoot. I forgot he is RS. Plus Georgia has a pretty great incoming class. I wonder how it will all play out for Georgia.

No relays so hard to score at NCAAs!