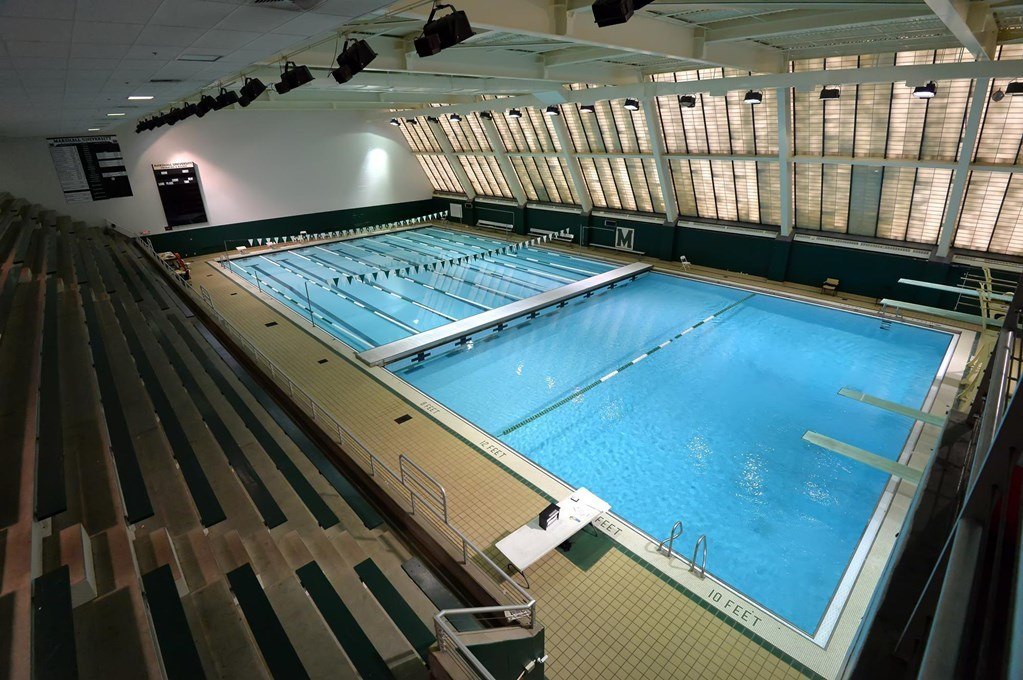 Teel Hartmann swam at Marshall from 2013-2017 and worked on campus as an IMG representative. Stock photo via Marshall Athletics

In spite of their head coach resigning, and having no assistant coach on staff, Marshall University’s women’s swimming & diving team still was able to host the 2018 West Virginia Games this past weekend. Hosting in-state collegiate programs from across the 3 divisions of NCAA swimming, Marshall’s women finished 2nd behind only West Virginia in the meet (the only other Division I program present).

When we asked last week who would be managing the swim program, a spokesperson for Marshall declined to answer. After the meet, however, in a press release about how the event all came together in a period of turmoil, the school revealed that former Marshall swimmer Teel Hartmann is serving as the interim head coach. Hartmann works as a Partner Services Coordinator at IMG College on campus. The job entails corporate sponsorship support, sales, and coordination on behalf of sports marketing giant IMG.

Hartmann swam at Marshall from 2013-2017, where she was a middle-distance freestyler, breaststroker, and IM’er. That includes top-13 finishes at the Conference USA Championships in the 400 IM in all 4 of her seasons with the Herd: 9th as a freshman, 13th as a sophomore, 12th as a junior, and 10th as a senior. She still ranks 8th in school history in the 400 yard IM with a personal best of 4:25.09.

Chloe Parsemain, another former Marshall swimmer who still lives in Huntington, assisted Hartmann with coaching duties, and a number of parents volunteered to help push the meet forward.

The school has not provided any information on how long Hartmann would lead the team or a timeline on hiring a full-time head coach. The prior head coach, Bill Tramel, was paid $56,508.15 in the 2017 fiscal year, according to West Virginia state public records*.

*Note – many intercollegiate athletics coaches receive additional money from boosters or other private sources. The amount in public databases typically only reflects the portion paid by public government institutions.

“It was an awesome meet and the girls did outstanding,” Hartmann said after the meet. “There were a ton of girls who had better times at this meet than at this same meet last year, which shows a ton of improvement. It’s kind of crazy when you consider that, as of Monday, they didn’t even know if they were going to have practice.”

“But we kept them swimming, kept them in the water, and when it came to the meet I told them my only expectation was for them to have fun. The atmosphere was unbelievable with the circumstances.”

“When you graduate you want to come back and see the team, and I’ve been lucky enough to stay here after my four years,” Hartmann said. “After the meet, I cried. I choked up a little bit. You realize your heart is in it as much as theirs, and it’s good to have heart in it while we’re trying to work through all of this.”

if you ever wanted to know the committed MUSD has to each other, this is prime example yall. The coach left four days before the first meet and a HERD of former swimmers came together. I am extremely proud of Teel and all her hard work. Her heart is in this team, as well as every former MUSD member.

Congratulations to both Teel and the entire girls swim team .Having gotten to know her when she was coached by my son before she graduated and to she the drive and hard work she put in I know she will help keep the team together and don’t be surprised by what you see them accomplish this season Good luck to each and every young lady

Vote Up8-4Vote Down Reply
That Guy

While I genuinely wish Marshall the best moving forward, I also have to seriously question the wisdom of hiring a head coach with zero past college coaching experience, and someone who likely partied with the 3/4 of the current team within the past 1-2 years.

Teel is doing a fantastic job getting the team on track! She stepped up as soon as she knew about the situation, despite being extremely busy with a full time job and taking classes toward getting a masters degree. I’m sure if they had anyone who wanted to be an interim head coach at Marshall with college coaching experience, they would have already been hired as an assistant long ago (as there are literally no coaches with the team now). But on such short notice, Teel stepped in and it feels like the most ideal situation.