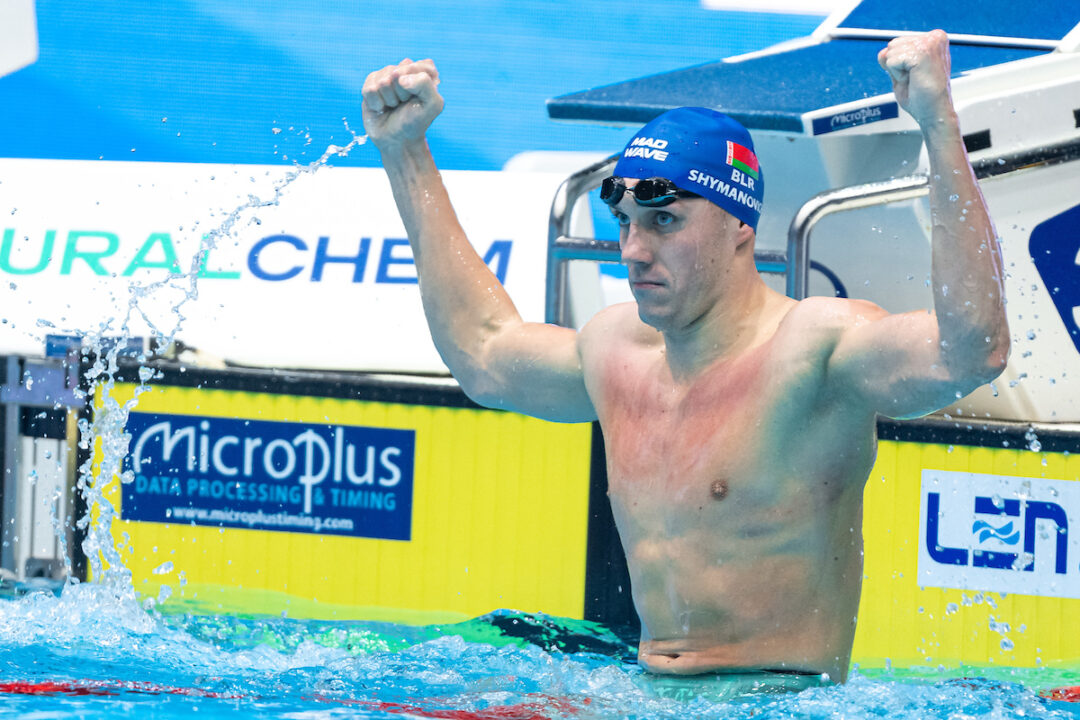 Shymanovich and Szabo both tied a world record at the meet, while Kirpichnikova came within 0.29 of the world's fastest 1500 freestyle swim. Archive photo via Giorgio Scala / Deepbluemedia / Insidefoto

The 2021 European Swimming Championships, which took place from November 2 – 7, 2021, dispensed cash awards to the 15 highest-scoring men and women who raced at the meet. Each swimmer was ranked based on their single best performance in terms of FINA points and the top 15 men and women were given prize money.

The top 2 points scorers at the meet are unsurprising considering that they both exactly tied a world record at the meet which will be worth 1000 FINA points. Szebasztian Szabo accomplished the feat first when he posted a 21.75 during the 50 butterfly final to tie Nicholas Santos‘ 2018 world record in that event.

Following Szabo’s 1000-point yield, Ilya Shymanovich swam his way to a 21.75 50 breaststroke, which is the exact same time that Cameron van der Burgh used to become the fastest man in history back in 2009.

On the women’s side, we almost saw a world record fall when Anastasia Kirpichnikova threw down a 15:18.30 in the final of the women’s 1500 freestyle. That time for Kirpichnikova was a massive best time and Russian record but fell just short of Sarah Kohler’s world record from 15:18.01. While she didn’t get the perfect 1000 FINA points that come along with a world record-matching swim, she scored 999 with that swim to top the rankings.

Another big 1500 freestyle at the meet came from Germany’s Florian Wellbrock who won gold in the event with a 14:09.88. While it wasn’t as close as Kirpichnikova’s, his swim neared the world record of 14:08.06 which is held by Gregorio Paltrinieri. That swim for Wellbrock was worth 993 points, which made him #3 in the points rankings.

Sarah Sjostrom and Kira Toussaint assumed the 2nd and 3rd spots in the women’s race with their respective 50 butterfly and 50 backstroke performances. Sjostrom managed to deliver a 24.50 in the women’s 50 butterfly to take gold, while Toussaint was a 25.79 to win the 50 backstroke. Those swims were good enough for 985 and 978 FINA points, respectively.

Rounding out the top 5s were Nicolo’ Martinenghi and Emre Sakci thanks to their respective 50 breast semi-final swims of 25.37 and 25.38, and Evgenia Chikunova (200 breast), and Analia Pigree (50 backstroke).

Check out the full lists of the top 15 men and women from the 2021 European Short Course Swimming Championships:

In addition to the top 15 awards, the LEN also gave out bonus prizes for any world and European records broken at the meet. It’s unclear whether Szabo and Shymanovich were awarded the world record bonus for tying the record, but if they were, it would add €10,000 to their earnings, bringing them to €35,000 each.

Both of their swims, however, marked new European records, for which the LEN gave out €5,000. The only other individual European record at the meet came from Gregorio Paltrinieri who lowered the men’s 800 freestyle ER to a 7:27.94.

If you think about it… 25k for a world record is ridiculous!!