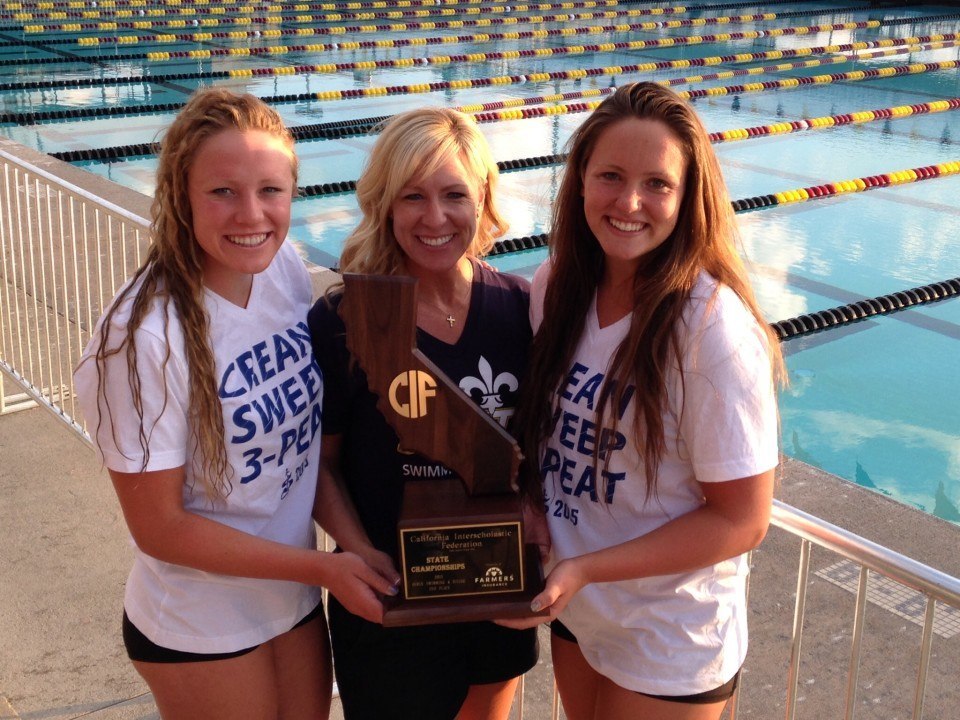 SwimSwam proudly presents the series, SwimMomMonday in which “ordinary” swim parent Anne Lepesant talks to “extraordinary” swim parents about the similarities and differences we experience in raising swimmers. This week Anne interviews Elizabeth Eastin, mother of Stanford freshman and American record-holder in the 200 IM, Ella, and University of Michigan commit Emily.

People who know me best probably would not describe me as athletic, but I do love being active. While growing up I played a variety of sports, but I am reminded by my siblings that I wasn’t very good at any of them. The girls received the “athlete” genes from their father and his side of the family tree. [Editor’s note: Jeff Eastin played college and professional international basketball. His father was drafted in baseball. HIs grandmother was one of the first pro golfers. His sister had a scholarship to play basketball in college and her husband played professional baseball with the Mariners. His grandfather was also a great boxer but went off to the Korean war where he was a hand-to-hand combat specialist.]

Ella and Emily on a cooler, summer league 2003. Photo courtesy of Elizabeth Eastin

I am fondly referred to as the “NARP” (non-athletic regular person) in our home, but that doesn’t stop me from pursuing my own fitness goals. I usually head to the gym when the girls have morning practice and then I swing by Starbucks to grab each of us a coffee for school and work. I will admit to being somewhat competitive in other areas where I might have a chance at excelling – such as throwing awesome birthday parties for the girls or designing the coolest swim team apparel on the pool deck.

Both Ella and Emily were very strong and active even as infants/toddlers. We had a suspicion that the girls would be athletically inclined just because of their father, but we never would have thought they would be competitive swimmers. They both enjoyed dance, ballet, gymnastics, and tumbling, but eventually they realized their height might be a good fit for basketball and volleyball.

Because we lived in Southern California, we knew it would be very important for the girls to be swim safe. We spent a lot of time at the pool even when they were just a few months old helping them get comfortable in the water. It wasn’t long before they began swimming from one side of the pool to the other beaming with pride. When they were 5 and 6 they joined the neighborhood swim team and learned all four strokes. I think that is when I realized there was something special about the girls and their ability in the pool. The girls continued to play volleyball into junior high, but once swim practice and meets increased, they both decided that swimming was the sport they would focus on.

It has always been a priority for the girls to try to keep some balance between school, sports, social and spiritual life. This was a huge challenge for us as I’m sure it is for many families. The expectations and competition in academics alone are extremely high. There were times when we had to have candid talks with teachers, coaches, and even family and friends about limitations and balance. Some responded well to this feedback and others just didn’t understand, but we always put the girls’ well-being first. I would draw the line when the girls weren’t able to get a proper night’s sleep because they had way too much homework and couldn’t manage to get it done before and after practice. We found that it really wasn’t necessary to pressure the girls about anything academic or athletic, because there were plenty of people doing that already. I remember one day Ella came home in tears because her fourth grade teacher told her if she didn’t do well on an assignment she wasn’t going to get to go to college. She was devastated and that is when we realized the amount of pressure they were under even in grade school.

In my opinion, the idea that doing everything and doing it perfectly isn’t a realistic expectation, but somehow our kids think it’s possible and when they can’t achieve success in everything they are devastated. I think ultimately, the best thing we did was find a private high school that supported student participation in extracurricular activities and recognized the fact that sports, music, and the arts provide students with excellent growth and leadership opportunities. We also encouraged the girls to participate in servant leadership (ASB) so that they could build friendships with students outside of swimming. This allowed them to take part in community service activities, help plan pep rallies and dances, and create lots of great high school memories in addition to the ones made with the Crean Lutheran High School swim team. The girls did make many sacrifices along the way (as many swimmers do) missing out on sleepovers, sugary snacks, and vacations because they had early practice or a swim meet. But, there were also times that their coach let them miss a practice or a meet so that they could attend a special social or church event.

4. How differently do you mother the girls?

Ella and Emily are Irish twins (born just eleven months apart) but they have very distinct personalities. They also approach life differently. As their Mom I can appreciate the differences, but as sisters those qualities can frustrate one another and cause friction. I try my best to take that into consideration and help them understand that being different from one another doesn’t make them better or worse. We are really lucky in that Ella and Emily have been constantly surrounded by grandparents, aunts and uncles, coaches, teachers, and friends who have all been there to provide counsel and steadfast encouragement through the ups and downs. It has also been a blessing to feel so supported by family and friends as I try to juggle competing demands as a working mom.

I think the best part of being a swim mom is the great friendships that are formed as a result of many hours on the pool deck. One day you are watching the little ones play a game of UNO on an ice chest between races at a JO Max meet and the next you are in the stands at Nationals screaming uncontrollably for your friend’s daughter who made the World Team. Swim Moms (and Dads too!) can appreciate the long journey – the ups and the downs of the process – and the sheer joy when you watch your swimmer achieves their goals.

I think the hardest part of being a swim mom is the feeling of helplessness after your swimmer has a disappointing race or even a disappointing season. You want to encourage them to keep working at it even though you know just how tough it is. As a parent you are inclined to help fix the problem, but it doesn’t work that way in swimming. Sometimes there is really nothing you can say to make things better. I think that is the hardest part.

My favorite swim memory of all time was at 2013 Junior National Championships in Irvine. Because we were at home, many of our family and friends were able to attend. Dozens of Northpark Riptide swimmers that Ella and Emily coached in the summer came to the final to cheer both girls on in their races. The group filled an entire section of the grandstands. They held up giant hand painted posters, banged inflated cheer sticks without regard, and screamed the entire duration of a long course 400IM and 200 backstroke Final. It was AWESOME!

8. Do you get nervous watching them swim?

Yes, I do. I tend to be most nervous at big meets…that someone will miss a race or that they will be DQ’d. Once the race is going I try to take pictures of the girls, the pool, the coaches, and sometimes the fans’ reaction to the race. Most of the photos don’t turn out, but it’s therapeutic to me.

Even when a meet seems like a disaster, we go celebrate with dinner and, more importantly, dessert. We usually find friends and family to join and focus on the good things. All of the hard work put into training and preparation should be recognized – even if it doesn’t result in the outcome we hope for. If something funny happened, we talk about it and laugh.

The best swim mom advice I ever received was from Olympian Kaitlin Sandeno. She once told me that the best thing her mom ever did was to always make sure her swim cap matched her swim suit perfectly. I think that says it best. My advice would be always be Mom first and make sure it’s fun. Take care of the things you can control like a good breakfast, positive attitude, cute swimsuits, warm towels, hot chocolate, etc., and let the rest go. The coaches are there to coach. If you don’t think that it is possible for them to do the job, then you might need to look for a new one.

Anne Lepesant is an ordinary swim mom. Her four daughters have been with Swim Pasadena since 2004 and now three swim in college (Caroline is a senior at SCAD Savannah; Victoria, a junior at Princeton; Madeleine, a freshman at Hamilton) and one in high school (Isabelle is a junior at Pasadena High School). In this series, Anne explores the question: “ordinary” swim mom to “extraordinary” swim mom, what it’s like to raise truly exceptional swimmers? What experiences have we all shared? Where do our paths diverge? Stay tuned for some interesting #SwimMomMonday conversations.

I love this featured article. Please have more. Thank you Anne!

This is a good article. Both Ella and Emily seem to get along well with their peers and also adults which is good for young women.

Great article !! Every word was spot on!
Love the family, grandparents too, who genuininly love and support their girls and the entire team !!!