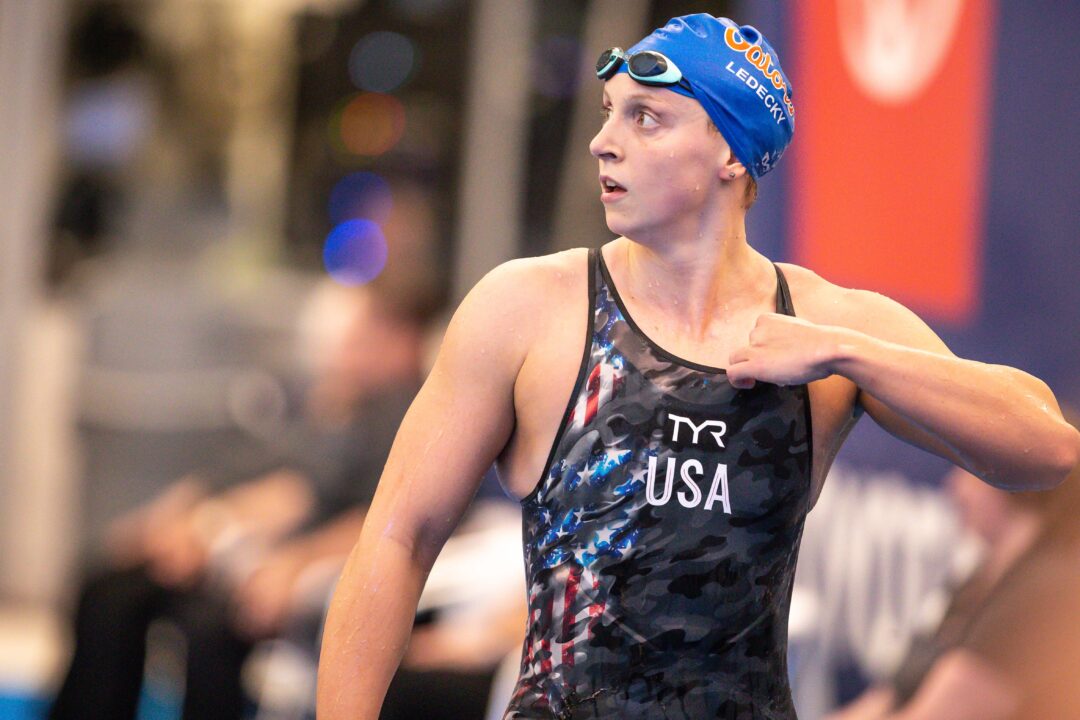 Katie Ledecky recently broke the world record by nearly 10 seconds in the women's 1500 free, which is the most dominant women's SCM mark on the books. Archive photo via Jack Spitser/Spitser Photography

The women’s world record book has been rewritten in recent months in short course meters. From late October until the end of 2022, world records in six different women’s individual events were reset in SCM, including one by a whopping 10 seconds by Katie Ledecky.

With so many updates to the record books, it feels like a good time to take a look at which are the most dominant, or disparate, compared to the second-fastest swimmer in history.

No surprise here, Ledecky comes out on top.

After an incredible summer that included four long course world titles, Ledecky, who has rarely raced SCM throughout her career, obliterated the women’s 1500 free world record at the Toronto stop of the FINA World Cup circuit, stopping the clock in a time of 15:08.24. That put her nearly 10 seconds—9.77—under the previous mark set by Germany’s Sarah Wellbrock (née Kohler) of 15:18.01.

This swim stands up as the most dominant relative to the #2 time, as it’s 1.06 percent quicker than Wellbrock. Perhaps the most impressive part of Ledecky’s swim was that she neared the world record in the 800 free on the way, turning just 1.24 seconds shy of Mireia Belmonte‘s world record of 7:59.34 in 8:00.58.

Ledecky went on to break the 800 free world record the following week in Indianapolis, clocking 7:57.42.

Katinka Hosszu is another big name ranked highly on the list. A few months ago, we would have seen Hosszu at the top with her world record of 2:01.86 in the women’s 200 IM. However, after the Short Course World Championships in December, her ranking in that event has moved down to 15th, with Kate Douglass‘ swim of 2:02.12 putting Hosszu’s world record under threat.

Prior to Douglass’ swim, Hosszu held ownership of the entire top-10 performances list in the 200 IM was nearly two seconds quicker than former #2 Kaylee McKeown (2:03.68).

Hosszu remains up at #2 on the list by virtue of her 100 IM record of 56.51, joining Ledecky as the only two swimmers with a record more than one percent better than anyone else.

There are five female athletes who currently hold two world records in SCM. Of the five, Maggie MacNeil has the most dominance over the field in her two respective events, averaging out to be 0.965 percent quicker than the second-fastest ever in the 50 back and 100 fly.

The biggest drops in record dominance over the past year came from two events that didn’t see a new world record, but saw a #2 time near the all-time mark: Hosszu’s 200 IM and Rebecca Soni’s 200 breaststroke.

That Belmonte 200 fly really stands out. She was on fire for a year there

200 fly and 400 IM are Summer McIntosh’s events, so maybe she’ll be the one to break those records

I’m more impressed with MacNeil’s margin than the two entries above her. The 100 butterfly is contested all the time and by the elites of each generation. The two events on top comprise sorry female distance swimming and rarely contested 100 individual medley. In fact, like the 200 medley I doubt Hosszu’s margin would be anywhere near the top of the list if Douglass and/or Walsh had competed in the 100 medley in Melbourne.

For future articles I recommend against comparing with the #2 time. Instead, maybe compare against the #10 performer?

by the current methodology, Lochte’s 200IM of 1:54.00 wouldn’t be very impressive because a certain GOAT was on his tail. But of course the gap behind the two is massive.

Similarly, I am looking at Katinka’s 2IM WR here in a similar way.

By comparing a % improvement relative to a further down rank (I even think 20th or 50th) I think will prevent the randomness of whether the #2 person happened to be a phenom too.

Ignoring the time analysis, I’m looking at the recent worlds gold medalist times. The 400IM record stands out to me as a super solid time and will be a tough nut to crack in the future. Also this one is controversial but Cate Campbell 100free given Emma’s superfast relay split but she still couldn’t get very close in 100free final.

Given how good her relay exchange is these days Emma needed to split 49 mid if she were going to challenge the WR individually. You’d have to think C1 would own a bunch of 49 splits if she targetted SC worlds during her prime (especially 2018).

I could see McIntosh breaking the 200 fly and 400 free in the next year or two. Ledecky’s 1500 will be untouchable for some time, unless she breaks it herself.

I believe that Ledecky would swim a 14.59 (becoming the first women to swim under the 15 min magical barrier) if 1 time in her career she decides to go to short course worlds in full taper mode.
I think for that to happen she has a 3 yr window. My hope is that she decides to do it after de Paris24 games. 1 time in full power.

I could see Ledecky retire after an Olympic cycle but still continue hard training to take a stab at some “fun” records. Really leave her name in the books for a lifetime. It’ll be at the tail end of her career, but she still could rewrite the books.

Why would she retire? but still continue hard training to take stab at some ‘fun’ records.

I’m thinking it wouldn’t be a public retirement but more of a mental one. Training but maybe just doing singles

Which is unlikely and she’s gonna be 27 and the next Olympics after Paris is at her own country which she wouldn’t want to miss it.

Katie Ledecky will retire after the 2028 Summer Olympics.