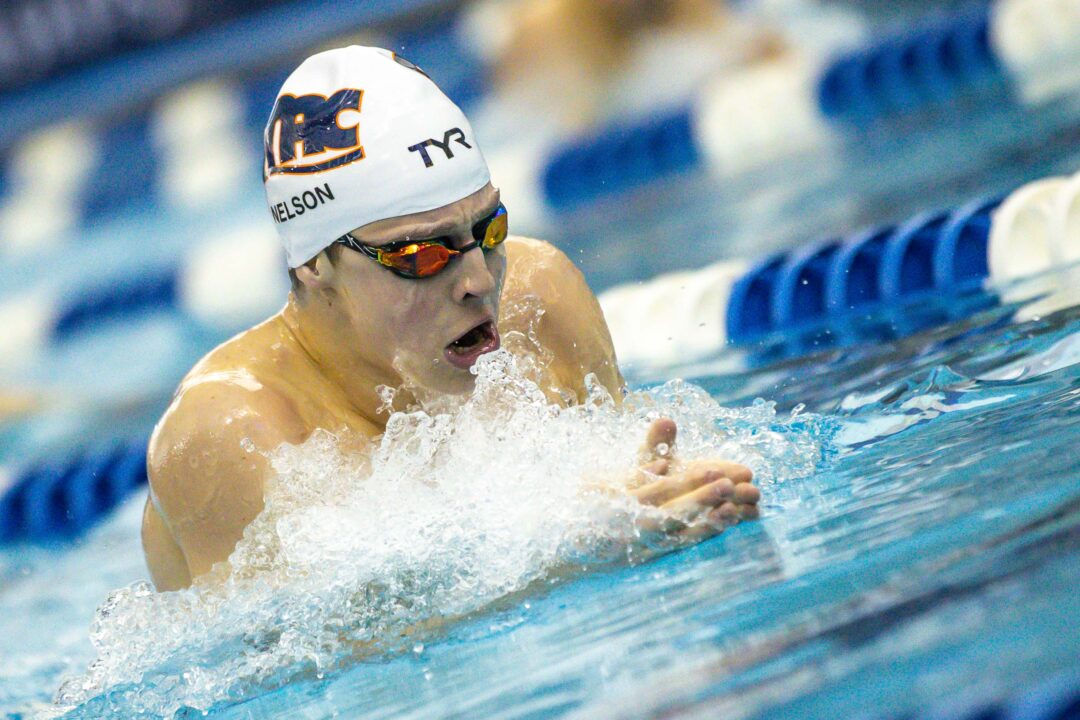 #1 class of 2022 recruit Baylor Nelson (above) and other SwimMac teammates, including Grace Rainey and Caleb Maldari, competed at a suited SwimMac only meet. Archive photo via Jack Spitser/Spitser Photography

SwimMAC held the Novant Health Invitational at their Charlotte Latin training facility last weekend. This was a suited meet and was closed to members of SwimMAC only. According to the meet promo, the goals of the meet were to gain experience in the long course format, demonstrate improved racing habits since December, and to compete with and support other SwimMAC athletes.

Florida-commit Caleb Maldari swam a 2:02.93 in the 200 back, a little above his best time of 2:01.17 set at the US Open in December. Maldari is already the fastest in the event in the 15-16 age group, and his time would be the second fastest in the 17-18 age group, behind SwimMAC teammate Baylor Nelson.

Maldari was also slower than his best time in the 200 IM, clocking in at 2:05.77. This was just .04 off his best time, also set at the US Open. Maldari also ranks first in his age group in this event, and would rank third in the 17-18 age group.

Other Swims from Madari:

Texas A&M-commit and #1 in the class of 2022 Baylor Nelson also competed at the meet. In the 200 IM, Nelson came in at 2:04.15, off of his time from the US Open (1:59.86). Nelson currently ranks 10th in the 200 IM all-time in the 17-18 age group, according to the SWIMS database. Despite being well off of his personal best time, Nelson’s IM at this meet is still faster than anybody else in the age group this season.

Other Notable Swims from the SwimMAC Boys

Grace Rainey (class of 2023), who will be attending the University of Florida, swam a 1:10.43 in the 100 breast. This was four-tenths better than her time at the US Open, and the fastest that Rainey has been in the event since 2019 at Juniors. The time puts Rainey at third in the 17-18 age group in the event this season.

Rainey also dropped over a second in her 100 fly, finishing in 1:01.84. This puts her in seventh this season in her age group.

Other Swims from Rainey:

14-year-old Clarke Neace swam a new personal best in the 200 free with a Futures qualifying time of 2:05.83. This is the second fastest swim in the 13-14 age group this season.

Duke University-commit Molly Donlan went 1:02.16, just .15 off of her best time. Donlan is the third fastest in the 15-16 age group in the event. She was also just off of her best time in the 200 back, adding just over half-a-second with a time of 2:18.31. This was a season-best for Donlan, and puts her in fifth in her age group this season.