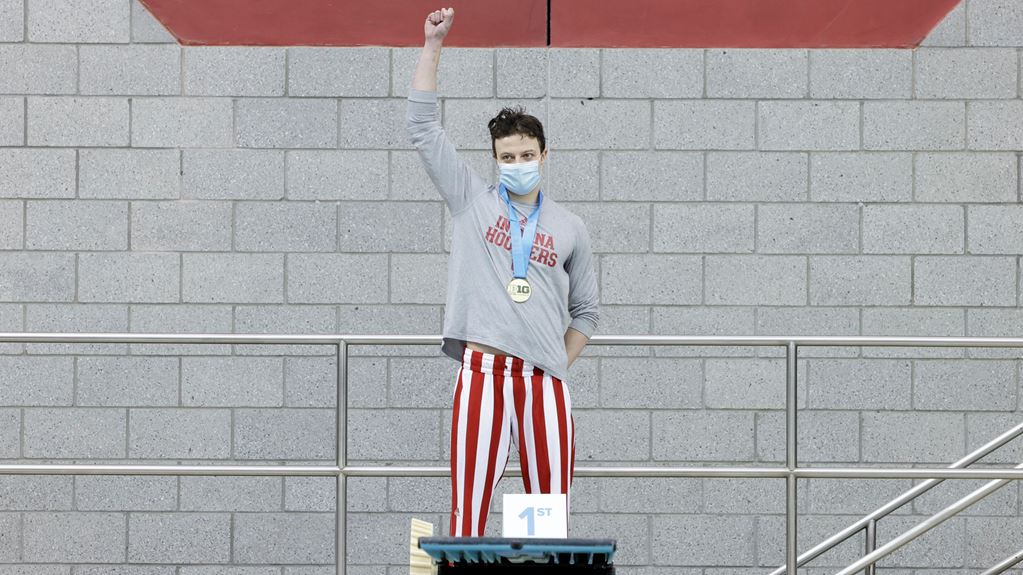 Defending Big Ten champion Tomer Frankel (above) looks to defend his 100 fly title in one of the fastest A-Finals in Big Ten history. Archive photo via Indiana Athletics

The last time the A-final was sub 46 was in 2019, when IU’s Van Mathias swam a 45.91 to earn the eighth seed. This year’s meet marks the first time that going sub-46 did not guarantee a spot in the A-final, as Chac Gustafson from Ohio State earned the top spot in the B-final with a 45.92 prelims swim.

The Big Ten has seen steady improvement in the 100 fly over the last decade. In 2012, Michigan’s Daniel Madwed won the A-final in 46.02, a time slower than Gustafson’s ninth seed swim at this year’s edition of the meet.

The slowest time on the list, a 47.67 from 2014, would fail to qualify for the C-Final this year. That time, which was ranked eighth after prelims in 2014, would only place 26th this year, showing improvement in the overall depth of the Big 10 in the 100 fly.

IU has three swimmers in the top eight this season: Bruno Blaskovic, Tomer Frankel, and Gabriel Fantoni, who rank 1-2-4 going into finals. The final also features four freshmen in Ohio State’s Alex Quach, Penn State’s Victor Baganha, Michigan’s Gal Cohen Groumi, and Purdue’s Brady Samuels, which may indicate that the event will only get faster in the near future.

IU’s Frankel is the defending champion in the event, winning in a time of 44.91 last year. He swam a 45.28 in prelims, coming in only .04 behind teammate Blaskovic. Quach and Fantoni are also within .15 of Blaskovic after prelims.

That’s a heck of a fast progression.
Definitely no one has a monopoly on fast swimming these days.
Lots of great programs, teams, coaches, swimmers and individual performances all over the country – great to see!