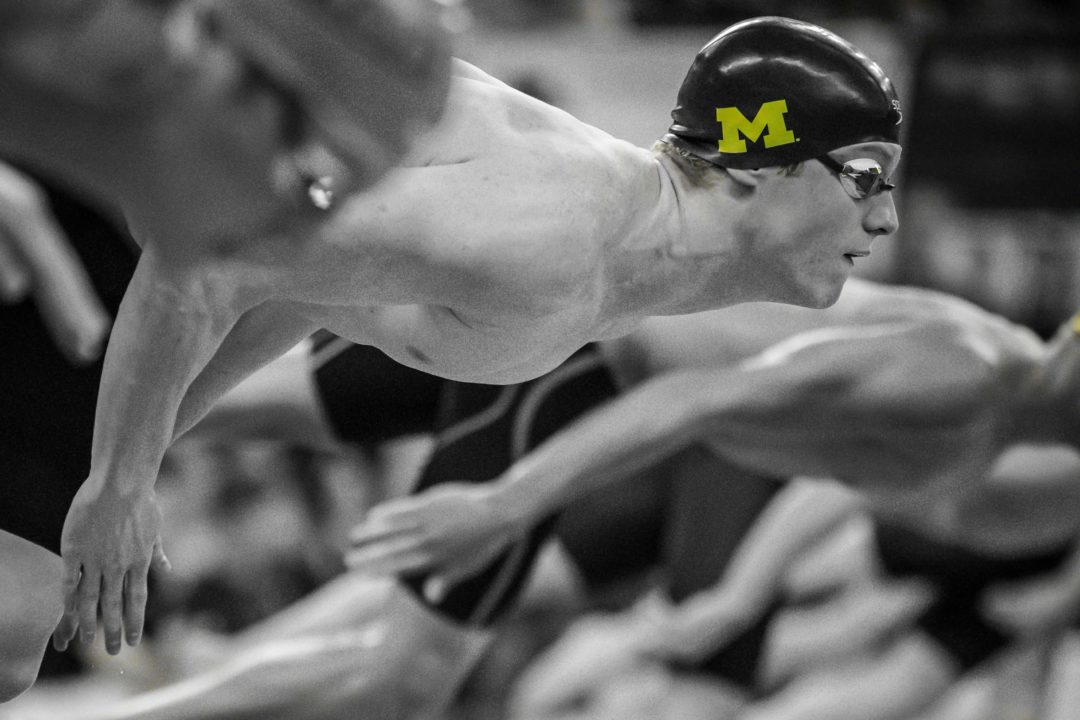 Senior Patrick Callan was the top finisher for the Wolverines, taking 28th with a 4:16.44. Stock photo via Jack Spitser/Spitser Photography

The University of Michigan, which has been one of the premier men’s mid-distance and distance freestyle programs in the NCAA since the inception of NCAA swimming, came out flat in this morning’s prelims. The Wolverines made program history again this morning, but not in a positive way.

Michigan had just two swimmers in the 500 free prelims this morning. Senior Patrick Callan was the top finisher for the Wolverines, taking 28th with a 4:16.44. Sophomore Jake Mitchell was the other Wolverine in the race, finishing 46th with a 4:21.24. Mitchell was notably a U.S. Olympian in the 400 free last summer, finishing 8th in finals.

The team performances today mark the first time since at least 1992 that Michigan hasn’t scored in the 500 free at NCAAs. The table was set last year, when Michigan didn’t have an ‘A’ finalist in the event for the first time in the same period of time.

Michigan has had a bit of a down year this season, which hasn’t been helped by instability on the roster, caused by swimmers entering the transfer portal, and some taking semesters off from competition. Another notable change to the program came last summer, when longtime associate head coach Rick Bishop was hired as the head coach at LSU.

Wouda enrolled at Michigan in fall 1992. Remember back then Trials were held in April so it was quite common foe elite swimmers to redshirt during olympic years!

Has anyone considered maybe the focus is world’s?

Both Mitchell and Callan looked easy, almost like they were taking out a 1650. I’m sure they were trying but there is something in their tempos that makes them look “off” compared to the other tapered swimmers.

Something is wrong in the water in Ann Arbor.

Too bad for Michigan ( I am sure that they will still score many point in other events) but Minnesota has a swimmer in the consolation heat! I wonder if this has ever happened before? Best wishes to all swimmers

1992 was the last time. CSCAA has a historical record of All-Americans here: https://www.cscaa.org/all-american