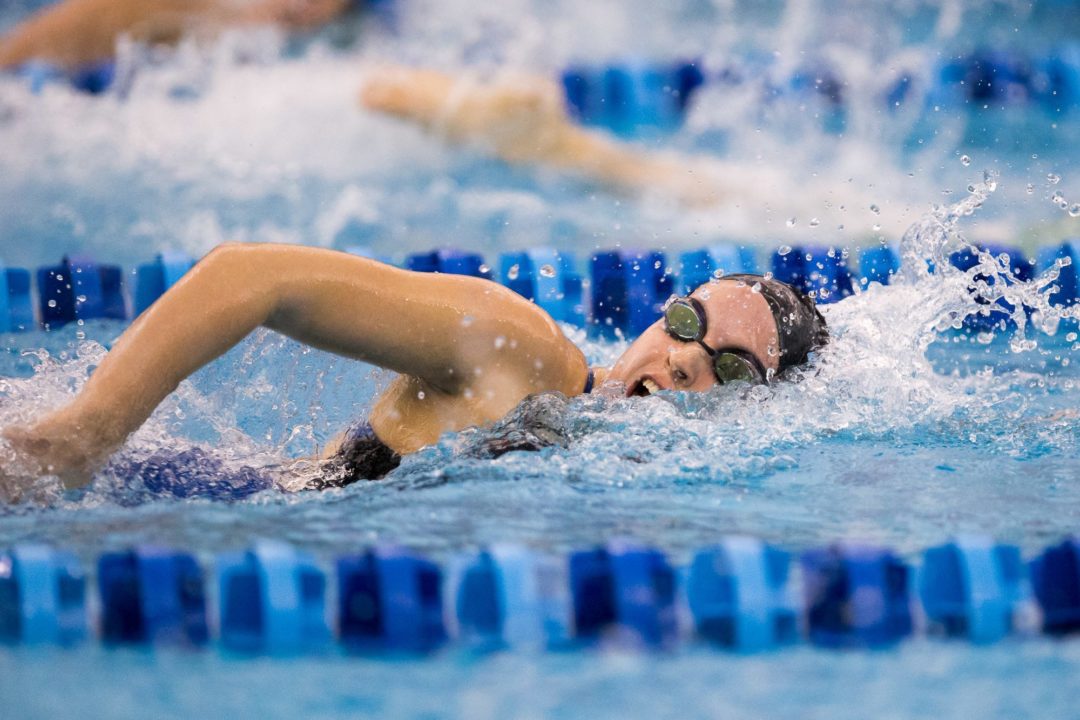 The historic team title-winning streaks continued at this weekend’s Kentucky High School State (KHSAA) Championship.  Both of the winning teams hail from Louisville, St. Xavier High School earning its 27th consecutive title for the boys, while Sacred Heart won its 26th title for the girls, its 13th since 1995.  Viable  competitors certainly gave it their best team efforts – notably, Covington Catholic on the boys and Notre Dame for the girls – however, the runners-up just simply could not match the depth of the winning programs.  Several key swims across multiple schools highlighted the meet, infusing energy into each of the schools trying to take down the perennially expected Tigers from St. X and Valkyries from Sacred Heart.

The Sacred Heart girls swept the trio of relay events, kicking off the meet with a new state record in the 200 medley relay.  The foursome of Tonner DeBeer, Kennedy Lohman, Asia Seidt and Brooke Bauer combined for a title-winning time of 1:40.74, cutting about a half second off of the previous mark of 1:41.45 from 2014.

A state record was also broken in the 200 free relay, with the combination of Brooke Bauer, Kennedy Lohman, Molly O’Hara and Leah Stevens powering their way to a new mark of 1:34.46.  Bauer, DeBeer, Stevens would later team up for the 3:24.36 win in the 400 freestyle relay to go 3-for-3 in relays at the meet.

The Valkyrie women would go on to win an additional five events, setting one more state record as well, on the team’s way to distancing itself further and further from runner-up Notre Dame.  Brooke Forde took home the title in the 200 IM, claiming the top time of 2:00.61, beating the field by over two full seconds.  That included teammate Kennedy Lohman who touched in 2:02.87 for second, while Notre Dame’s Madeleine Vonderhaar came in third in 2:03.28.

Steven’s other individual event swim came in the form of the 200 freestyle, where she led the field coming out prelims in a 1:48.06.  In what some would call an upset, Stevens was outmatched in the finals race, however, as Notre Dame’s Sophie Skinner blazed her way to a new state record time of 1:47.61.  Skinner is just a freshman, which speaks to the potential that may lie in this youngster who is just arriving on the high school swimming scene.  Of the race, Skinner told Cincinnati.com, “I was racing a very fast swimmer, Leah, and she’s amazing.  I just worked with her to finish the race and I just touched first….the energy from the crown really topped it off.”

But, Skinner didn’t stop with just one win and just one state record, she did it again in the women’s 100 freestyle race as well, where her 49.79 represents the first time a girl has dipped under the 50.0 mark in Kentucky state high school championships meet history.  The previous mark was held by Krissie Brandenburg, who later swam at University of Louisville, at 50.26 from 2009.

The pure sprint 50 freestyle event saw a mixed bag of schools represented on the podium, as North Oldham’s Grace Oglesby took the home the win a 22.92, setting a new state record in the process.  Oglesby was the only swimmer under 23 this weekend, as well as in history at these championships, as the previous mark was 23.14 from last year. Second place in the 50 was Sacred Heart’s Tonner DeBeer with a time of 23.57, followed by a familiarly named Gabi Albiero (daughter of University of Louisville coach, Arthur Albiero) in third with a time of 23.81.

Oglesby earned her second title in the 100 butterfly, again in a new state record, as she hammered the wall and also crushed the field in 51.75.  Sacred Heart’s Asia Seidt finished in second place (54.03), followed by Madison Winstead (55.89) from Paul Dunbar.  But, it was all Oglesby, as she led the finals field by over two full seconds, as well as surpassed her own previous state record 52.14 mark set just earlier in prelims.  In fact, Oglesby’s time just narrowly missed the 51.70 national high school record set by Beata Nelson (Wisconsin) last November.  Oglesby is only a junior, so count on that record to go down in the near future.

The 100 backstroke race was also an event with a big time gap between first and second place finishers, as Sacred Heart’s Asia Seidt touched in 53.44 to beat her competition by over two seconds.  Runner-up in the event was Notre Dame’s Amanda Smith, who clocked a 55.76, followed by Sacred Heart junior Emily LeClair who earned third in 56.53.

Effective as the breaststroke weapon on Sacred Heart’s 200 medley relay, Kennedy Lohman got the job done on an individual level as well, earning the 100 breaststroke title in a shiny new state record.  She held the previous mark of 1:01.29, but was able to slide just under it with a new time of 1:02.23 to win the event.  Paul Dunbar’s Madison Winstead was close behind in 1:01.65 for second, while Notre Dame’s Madeleine Vonderhaar touched in third in a time of 1:02.65.

Senior Erin Duffey also raked in the points for the Valkyries on the boards, earning a score of 469.20 to take home the state title in the women’s 1-mtr diving event.

The in-state rivalry continues, as Louisville’s St. Xavier came out on top again for the aforementioned 27th time in a row.  St. X procured this year’s title by over one hundred points, but that is not to say there were not some remarkable swims from several other schools along the way.  Especially from the ultimate rival Covington Catholic, who fought hard to the very end, coming away with a surprise relay win to top off their valiant team effort.

Starting with the first event, both St. X and Covington Catholic performed well by each exceeding the previous 200 medley relay state mark set at 1:33.26 in 2013.  This year, St. X would come away with the victory in 1:32.93, earned by JD Mundt, Keefer Barnum, Heyward Harrison and Matthew McDermott.  Runner-up Covington Catholic’s team of Brendan Meyer, Mike Summe, Robbie Newman and Evan McMillen combined for a swift second place time of 1:33.15.  Madison Central High School came in third in a time of 1:35.97.

Half of that same title-winning medley relay for St. X swam away with a second title in the 200 freestyle relay event as well.  JD Mundt, Trent Shulten, Matthew McDermott and Clayton Forde collectively threw down a 1:25.53 for first place, outpacing their competition by quite a big margin in state competition freestyle relay terms. Collegiate’s George Isaacs, Matt Bode, Coley Sullivan and Lee Bradley combined for a second place time of 1:27.23, while Covington Catholic settled for third place this time around with a team time of 1:27.85.

The final 400 freestyle relay was where the magic truly happened for Covington Catholic, however, as the foursome of Todd Sheets, Robbie Newman, Brendan Meyer and Mike Summe were able to pull off an end-of-the-meet victory over St. X in a new state-record-setting time or 3:05.72.  CovCath actually sat in second place coming out of prelims, but made it happen when it counted, taking down its own previous state record of 3:06.59 in the finals session, ending the meet on a thrilling high note over its nemesis St. X.  St. X finished just 8/100 behind in a time of 3:05.80.  On this particular relay, CovCath head coach Richard Dickmann commented to Cincinnati.com that he “knew it was going to take a state record to win….pure heart was shown on this relay.”

The action maintained an intense level throughout the individual races as well, starting with Beechwood’s Austin Haney, a University of Kentucky commit, crushing the field in the 200 freestyle event, taking the title in a speed 1:38.97.  St. X’s Clayton Forde was runner-up in 1:41.26, while Covington Catholic senior Robbie Newman held on for third in 1:41.86.

St. X answered the competition back immediately with a 200 IM win by senior and University of North Carolina-commit, Heyward Harrison, who successfully defended his event title in 1:49.18.  Cov Cath’s Mike Summe earned second place in the event with a time of 1:51.39, followed by Ballard’s Jake Precious in 1:54.22.

Harrison’s name would pop up again in individual results, as he took this year’s runner-up spot in the boys 100 butterfly.  His time of 49.44 fell short of title winner Nicolas Albiero’s (Christian Academy) 48.43 result.  Third place in the event was a Covington Catholic Colonel, senior Robbie Newman who registered a 49.66.  Albiero’s versatility was on display this meet, as the sophomore earned a second state title, this time in the boys 100 backstroke.  He topped the field in that race with a time of 48.92 to represent the only swimming under the 50-mark. Ballard’s Jake Precious came in second place in 50.05, while Covington Catholic’s Brendan Meyer settled for third in 50.17.

Meyer would earn some redemption in the form of becoming this year’s 500 freestyle state champion, collecting the title in the event with his winning time of 4:28.19.  Meyer’s back-half helped him pull away from St. Xavier’s Trey Hubbuch, who faded to second place with a final time of 4:32.33, followed by his teammate Clayton Forde who finished in 4:33.87 for third place.

The splash n’ dash was its usual frantic fight to the wall, with Ballard’s Branson Smith coming out on top with a winning time of 21.18.  St. X made it a 2-3 finish in the event, with JD Mundt (21.60) and Matthew McDermott (21.66) finishing in 2nd and 3rd place, respectively.  Smith would double-up on sprint freestyle titles, earning the 100 freestyle win at the meet as well.  Amazingly, Smith accomplished this same feat at last year’s championships as well. This weekend, his time of 46.11 set him apart from the rest of the field of 100 freestylers, with Collegiate’s Lee Bradley coming in second place in a time of 47.04, while CovCath’s Todd Sheets earned third in 47.30.

The boys 100 breaststroke saw swimmers from three different schools up on the podium.  Keefer Barnum from St. X came away with the win in a time of 55.88.  He was followed by Covington Catholic’s Mike Summe in 56.28, then Beechwood’s Austin Haney in 57.05.

Covington Catholic’s Louie Hunt earned the boys 1-mtr diving title, surpassing the previous state mark with his score of 569.40 to set a new state record with his victory.