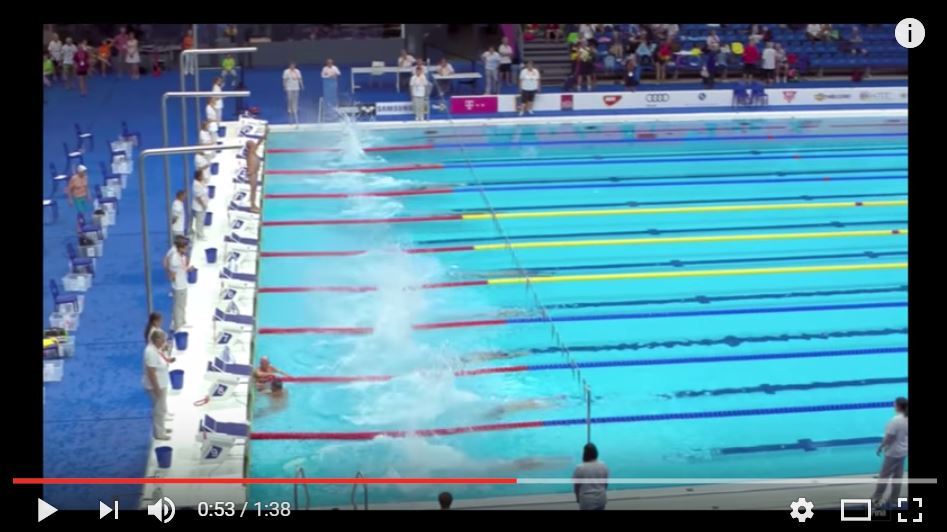 UPDATED 8/21/17 : A different swimmer, who is also competing at FINA Masters World Championships, contacted SwimSwam to inform us...

UPDATED 8/21/17 : A different swimmer, who is also competing at FINA Masters World Championships, contacted SwimSwam to inform us that there was, indeed, a period of silence at the start of the Saturday morning session.

Swimming in the final of the men’s 200 breaststroke at 17th FINA Masters World Championships in Budapest on Saturday, Spain’s Fernando Álvarez paid a personal tribute to the victims of Thursday’s terrorist attack that killed at least 14 people and injured dozens more in Barcelona. Álvarez had asked FINA (the International Swimming Federation) to hold a one-minute period of silence before the start of his race, but he told the press that his request was denied.

Álvarez, who swims with the club Natación Cadiz, was entered in the 50, 100 and 200 meter breaststroke events. He told El Español that after he swam the 100 breast on Friday, he asked FINA about a period of silence to honor the victims. But FINA denied his request, saying they couldn’t spare a minute from their timeline (“No se puede perder ni un minute” were his exact words to reporters).

So Álvarez decided to pay the tribute all alone. He stood on the block at the start of his heat of the 200 breast on Saturday morning, and after hearing the signal, he waited 60 seconds before starting his race. All soccer teams in the Spanish La Liga observed a minute of silence before their matches this weekend, and Álvarez thus joined his country’s tribute to the victims of the attacks.

Álvarez’ time was not recorded, but as he explained to El Español, it didn’t matter at all. “I started a minute late. But that doesn’t matter. What I was feeling was more than if I had won all of the gold medals in the world.”

Álvarez still has the 50m breast to swim on Sunday.

SwimSwam has reached out to FINA for comments and will update this story if we receive more information.

Also: Masters don’t have finals, and it was 200m breaststroke, not backstroke.

After reading some of the news today, I was wishing that ll human life would just end. Then I read about this. If Diogenes was still looking for an honorable man, he could have found him in Budapest.

But such a brave man. Not many of them nowadays.

Shame on them, much more money in spanish football and they had the time to tribute. Ironic how Hungary had the most aggressive approach against last year’s migration wave in fear of potential terrorists and now this, when the real thing happens . Really wow.

Please read csrefully, Fina, which is not Hungarian was the one refusing, not the Hungarian organizers. Read, think, than comment.

I am afraid that I don’t support the gesture. When have countries that sustain that number of casualties on a regular basis ever been honoured by a minute of silence? Any number of African or Central and South American countries would qualify, as would, on occasion, Israel, and a number of countries in the Middle East. Oh – and of course the ex-Soviet bloc too. Somehow European and US blood seems to be considered thicker (at least by the US and the Europeans and their followers). So the attacks in Paris were marked by minutes of silence everywhere, but the Russian plane that was shot down only a week or so earlier (with many more casualties) passed without any such… Read more »

Ridiculous. They were running 4 pools at the same time. I was in the last event on Sunday and was done by 11 am.

I can only speak for one of those pools, the one I swam in. There was a moment of silence at the start of the session. Those of us who were there observed it.

A disappointing lack of common sense and common decency from FINA and the meet officials.

I can only speak for one of those pools, the one I swam in. There was a moment of silence at the start of the session. Those of us who were there observed it.