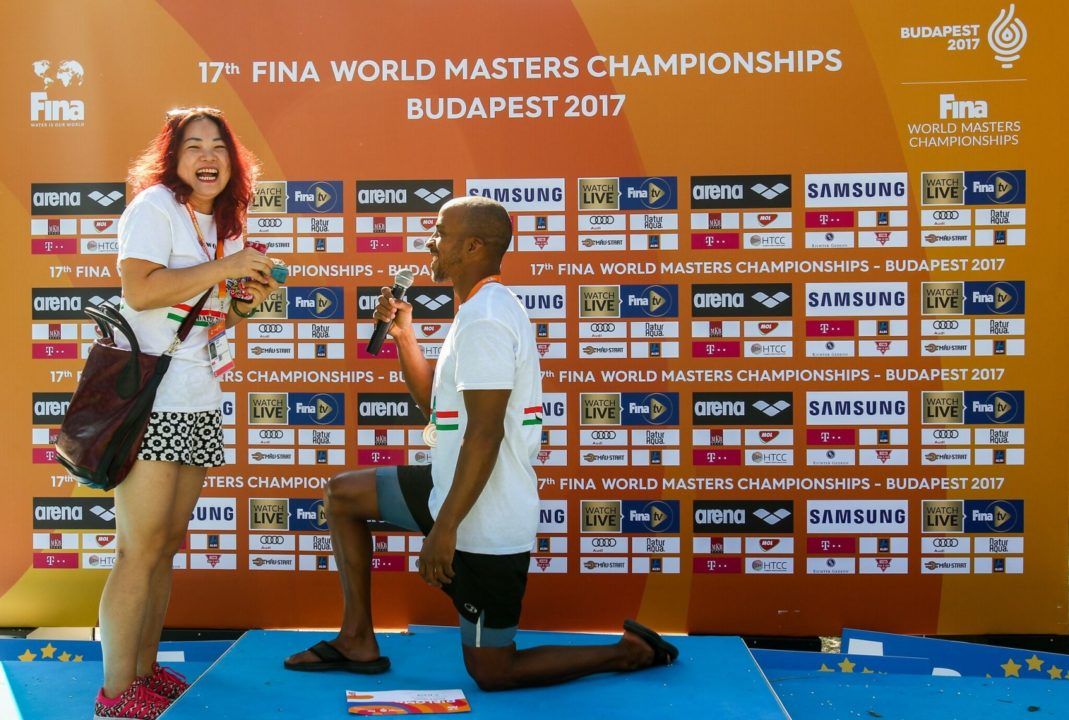 In a move made famous by Matt Grevers at the Missouri Grand Prix five years ago, Siphiwe Baleka proposed to his girlfriend while on the podium at the FINA World Masters Championships in Budapest last weekend.

Another silver medal in the 50 meter freestyle at the FINA Masters World Championships. Then I proposed. Then she said yes. #baleka2017 #afroswimmers #usmastersswimming #unforgettable #memoriesforlife

Baleka, a 46 year old Missouri native, and his girlfriend Yutong Zhou first began communicating via text using Google Translate about four years ago, but only met in-person for the first time a year ago. Baleka has visited Zhou (who lives in China) a number of times, but she has never been the US. The two planned to travel to the States together after Worlds.

Baleka already had the “yes” locked down; he had proposed over text previously, but wanted to stage something more special.

“If you are in love, you can overcome any kind of obstacles.”

The proposal was an exciting finish to a turbulent meet for Baleka, who was actually the first African American to ever be awarded First Team All-Ivy League swimming honors when he was at Yale, and is a truck driver fitness pioneer. At Worlds, he ended up with four silver medals. However, he had been on track for a gold before needing to be pulled out of the water on a stretcher after his “wheels came off” during the final 50 of his 200 IM.

“I went to the med tent so it’s been a lot of drama. A good drama, with the engagement and some not so good drama with the performance,” he said.

As to where the couple will go on their honeymoon? “We will probably go to another swimming event!”

All the best to the happy couple

Will Yutong swim masters too? Hope so!!

Best of luck to the happy couple. The world needs more love! But why propose over text first?!?