Shouts From the Stands: The Viking Says Thank You to the KMSC Pro Am 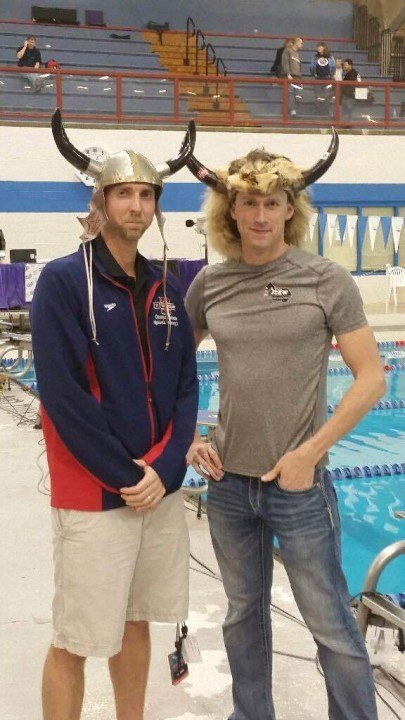 ONCE A VIKING. ALWAYS A VIKING. Current photo via Shawn Klosterman

Iowa is the 25th state to announce a plan to reopen pools in the near future, with lap swimming and lessons allowed to resume on May 22.

Large summer leagues in Chattanooga, Tennessee (above) and Madison, Wisconsin have cancelled their 2020 seasons, while Fort Wayne, Indiana is still on.

If you don’t like the career you’re in, you might want to work in the swimming community and be a part of our swimming family! Go here to see 2764 Swim Jobs.

The KMSC Pro-Am Classic has always been my favorite meet for a lot of reasons.  The coaching staff and volunteers know how to run a smooth operation.  The facility is top-notch.  The qualifying times are accessible, giving a lot of young swimmers an opportunity to mingle with professionals in a way that kids their age in other sports will never experience.  Most of all though, they generate that atmosphere just right to hit the sweet spot where a fun, relaxed environment can inspire some of the best racing of the year.  I have never been there without seeing stunning swims that make me blink and shake my head for that classic double-take… not just from the pro’s and not even only from my own swimmers– I get to see high school kids giving world class swimmers a good race, with some of them even breaking pool records that look like they were beamed down from outer space.

This year though…  It was a whole new level of fun.  I got to do something that I never imagined I would, considering my swimming career was supposed to have ended twenty years ago.  You see, I got back into swimming last year after two decades out of the water and decided to declare pro as a gag.  It was fun, but when I came back to regular practices with the team I coach last January I opened my big mouth:  I told the kids that I was gonna do it again, and if I did I WOULD make an A-final.  Then, to make sure I opened my mouth wide enough to fit both feet in it, I declared that I would dress like a Viking for the march out when I did.

Yeah… the whole Viking costume thing was something that was most likely never supposed to happen.  I mean really, what are the odds that a 40 year-old meatatarian who only trains about 3-4000 yards a week would score in the top 8?

For those who weren’t there for the KMSC meet, I have to explain that I marched out for the 100 breast final like this:

Please notice, I led the athletes through the crowd rather than along the pool because I just couldn’t deny everyone all those high fives.  haha.

Most people didn’t know that I was there to coach my team, the Jasper County Killer Whales and that my swims were just a bonus.  Most knew nothing about my long-time online identity as The Screaming Viking.   They had no clue that I have a little bit of a swim media presence. There is a lot of history behind that name, and it starts with the Viking Swim Club in Petersburg, Alaska.  As a matter of fact, one of my best friends from my age group days, my good friend and childhood rival Aaron Dean, was there coaching his team too.

Once a Viking always a Viking.

Everyone there made me feel amazing.  They understood that this was supposed to be fun.  Swimming needs more fun.  We need a little WWF in our sport. They cheered so loud!  People were asking to take pictures with me.  Kids came up to ask if they could pet my wolf and bear skins.  I got dozens of high fives, and so many people came up to me to say nice things that it would be impossible to count them.  They complimented my swims.  They told me it was fun to watch.  They even told me I was setting a great example that swimming isn’t supposed to be a laborious chore; it is supposed to be a labor of love.

So thank you to everyone at the KMSC Pro-Am Classic.  I could have looked like a contender for the top prize at Tool Academy, but instead you helped that part of me who is still just an age-grouper in awe of watching people swim fast feel like a pro for a weekend.  I hope that my swims played a small part in making you think this meet was just a little bit more awesome and that it makes you want to come back to OKC next year.  I am planning to do it all again if I can swim fast enough, but next time I hope to see a few more people in costumes during the march-out with me.

…and Aaron Dean, you better sharpen your horns and start working out.  I’m coming for you.

This is the best article SwimSwam has ever posted. Great job Shawn!

Thanks, Joe. You should fly down next December and put in a few races!

This video was SO GREAT! 🙂

I was there at the meet and saw this first hand. It was great. It really livened up the atmosphere of the meet without taking anything away from the reason the swimmers were there – to swim fast. The Screaming Viking may have even helped some swimmers do well, because it took their attention away from being nervous or scared. We could use a lot more lightheartedness in our sport during practice or at meets. While it may have been said hundreds of times already, well done and I hope to see you there again next year.