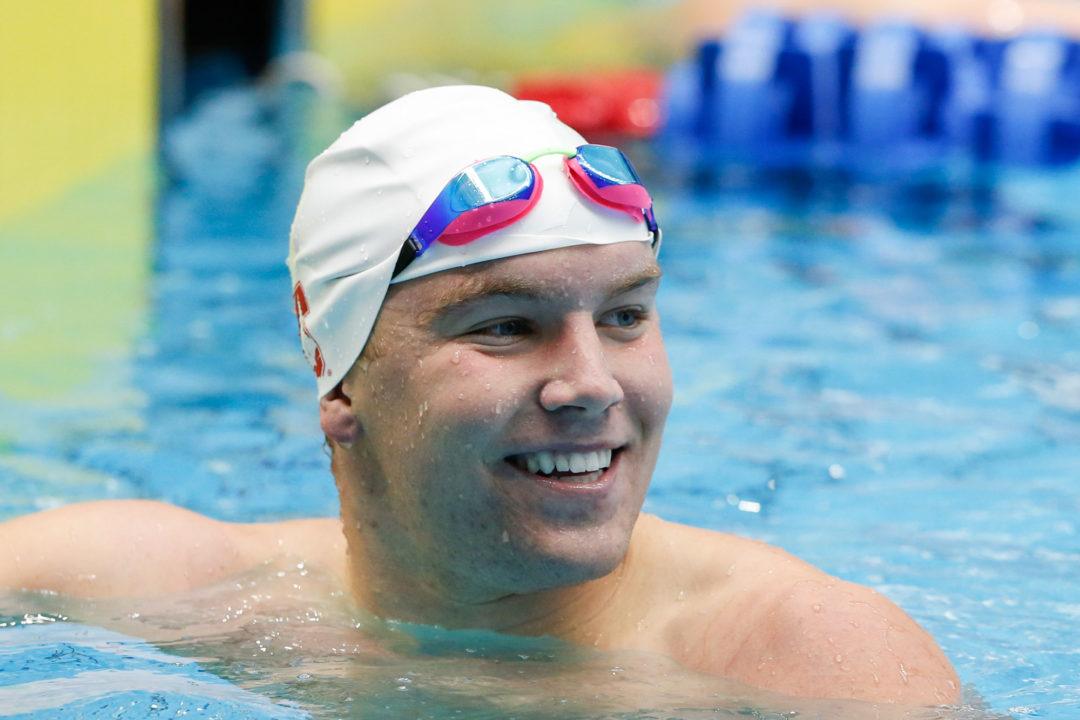 Georgia Men Topple Florida: Freeman is Back, Three Men Break 9:00 in the 1000

Georgia freshman Jake Magahey took down Florida’s Bobby Finke in the 1000 free, hitting a lifetime best in the process.

Fly/back specialist Ryan Zerpa of Alpha Aquatics in Los Angeles has verbally committed to the Purdue class of 2025.

Pac-12 Champion Grant Shoults set a new Pool Record as Stanford took down rival Cal at home to close the regular dual meet season. It came down to the final relay, with the Cardinal taking the meet by 2 points. In the 500 free, Shoults battled with teammate Liam Egan, coming from behind in the final 200 yards to win in 4:17.69. That took down his own former Pool Record of 4:18.40. Egan was nearly under it as well with a 4:18.48 for 2nd place.

Abrahm DeVine was instrumental in the Cardinal win, sweeping his individual triple. DeVine swept the backstrokes, putting up a 46.89 to win the 100 back by a full second. He returned for the 200 back, leading from start to finish as he brought home the win in 1:42.25. Finally, DeVine closed out his schedule with a victory in the 200 IM. He dominated the race by 2 seconds, winning in 1:45.81.

STANFORD, Calif. – No. 4 Stanford men’s swimming and diving finished the regular season unbeaten with a dramatic 151-149 win over No. 1 Cal on Senior Day at the Avery Aquatic Center on Saturday.

Sophomore Grant Shoults set a pool record and junior Abrahm DeVine won three events for Stanford (6-0, 4-0), which led by seven points heading into the final event. Cal (5-1, 4-1) won the event with a pool record time in the 200-yard freestyle relay, but the Cardinal took second and third to win the meet by two.

Prior to the meet, the Cardinal honored six seniors. It would be a memorable finale for Ted Miclau, Tarek Abdelghany, Liam Egan, Andrew Liang, Sam Perry and Curtis Ogren, who have combined for 30 All-America honors and led Stanford to back-to-back Pac-12 championships.

Stanford won just five of the 14 swimming events, but received some big points from its senior divers. In their final meet at Avery, Miclau and Abdelghany took the top two spots on the 3-meter. Miclau won with a score of 366.83 to edge out his teammate’s score of 342.30. Abdelghany won on the lower board with a score of 349.05, and Miclau earned a third-place finish at 306.68. The duo combined for 25 of a possible 26 points.

DeVine then capped the day with a clutch victory in the 200 IM. He touched the wall at 1:45.81 and freshman teammate Alex Liang was second at 1:47.95 — that combination gave Stanford its seven-point lead heading into the final relay.

Next up for the Cardinal are the Pac-12 Championships in Federal Way, Washington, Feb. 28-March 3.

STANFORD, Calif. – A highly competitive day of racing featured a battle right to the final event but the Cal men’s swimming and diving team couldn’t quite pull out the overall victory against host Stanford as the Bears dropped a 151-149 decision to the Cardinal.

As has been the case throughout the dual meet season, Cal (5-1) got the day rolling with a win in the 200-yard medley relay. This time, the team of Daniel Carr, Connor Hoppe, Justin Lynch and Ryan Hoffer combined for a time of 1:25.88 to give the Bears the first victory of the day.

Though Stanford’s Johannes Calloni gave the Cardinal its first win of the day in the 1,000 free, Cal junior Nick Norman fought to the wall to post a time of 9:00.76 for second place. Michael Jensen followed with a time of 1:35.13 and a win in the 200 free and Cal went 1-2 in the 100 breast with Andrew Seliskar swimming to a season-best time of 53.81 and Carson Sand taking second.

The Bears continued their momentum with Zheng Wen Quah swimming to a time of 1:43.94 to win the 200 fly. Pawel Sendyk and Lynch went 1-2 in the 50 free as Sendyk’s time of 19.61 sent the Bears to the first break with a lead in the team standings.

Jensen earned his second win of the day with a time of 43.78 in the 100 free, narrowly edging out Hoffer, who finished second. Carr and Andy Song placed second and third, respectively, in the 200 back and Seliskar finished his own double with a time of 1:56.39 in the 200 breast.

Needing a first and third-place finish in the 200 free relay to pull out a victory, Cal came away with just the win as the team of Hoffer, Sendyk, Jensen and Seliskar stopped the clock in 1:18.06. Stanford took second and third to clinch a two-point team victory.

With the regular season now concluded, the Bears set their sights on the postseason yet to come. The divers get their chance first as the Pac-12 Diving Championships take place Feb. 21-24 in Federal Way, Wash. The swimmers join the fray from Feb. 28-March 4, also in Federal Way. NCAA Zone E Diving Championships will take place March 5-7 in Flagstaff, Ariz. and swimmers and divers come back together from March 21-24 in Minneapolis for the NCAA Championships.

It seems Cal didn’t use their swimmers as much as possible. Holding them back a bit. Many only swam once, twice but never more than 3x…..allowed 4x?

Tryna give mid tier guys opportunities. Dave and Yuri are gonna have a conundrum on their hands with (having too many) Pac 12 scorers and NCAA qualifiers.

Mike Thomas was also a huge non factor, which is worrying. 10 seconds off in the 2IM when everyone else is pretty close to their usual dual meet ones is a little worrying. Is he sick?

I thought they still scored swimming and diving at dual meets and PAC12s. When did that change?

I double checked with the NCAA and PAC 12 conferences. There will still be 16 individual events in both Championships. 3 of those will be diving and, yes, scored. If a team wants to disregard almost 20% of these events it would seem they do so at their own peril. There will be no mythical conference or national champion in only swim events despite parochial and condescening attitudes.

BREAKING NEWS! It has been decided that not only would diving not be counted, all individual races from Clark Smith, Townley Haas and Will Lincon would not be counted either. Therefore, Cal wins the 2017 NCAAs Swimming & Not Diving/Distance/Breaststroke Championships! And if you don’t like it, they will send a bunch of hooded thugs to your campus to break windows and start fires. Typical – don’t like the outcome, change the rules, change the narrative.

Take a look at the Cal News on this meet. They just can’t accept the outcome. Who knows… maybe they win Pac12s and NCAAs. But on this day – they lost. Put on the big-boy speedo and own it.

They lost the swim/dive… not the swim. Lol

I am a Cal fan who went to Palo Alto for the meet. It really was nip and tuck the whole day. I knew that Stanford would ring up more points in diving and Cal had to overcome that, obviously, in the swimming portion the meet. We Cal fans are making no excuses, but now with Cal’s new diving complex and coach, we are seeing more improvement in our diving competition which is promising. For all the years I have gone to Cal Women and Men dual meets it was normal for us to be behind maybe 15 or so points before the swimming events began, but we almost always won the meet No complaints. And SWIM PHAN your cracks… Read more »

Good luck to your diver child

Let’s be real – You’re a troll AND condescending – in both cases your still a sore loser. Man/Woman up and wear the loss.

Wrong again my misguided troll. I have an All-American swimmer on a team that can count to 16 and include 3.

I’m glad you stick up for your kid’s team on swim message boards. I’m sure your kid is embarrassed, oops I mean appreciative.

It might be a swimming/diving meet but this website is called swimswam not divedove. I’m a Stanford fan, just pointing out the obvious that Cal outswam Stanford despite the swim/dive meet result. No need to get your panties in a bunch over your kid’s school, it’s just a dual meet.

Parochial? I would imagine that describes those who would keep swimming and diving together for “tradition” better than those who would change the rules to better reflect the nature of both sports. Never quite understood why the divers don’t want their own championships.

It’s going to be interesting to watch Ryan Hoffer upset Caeleb Dressel in the the sprint free events. Upvote this for Caeleb, Downvote for Ryan!

We all know Dressel will win, but Hoff might be able to make him look less dominant. I could see under 18.5 and 40.mid. The bigger story will be if he finds a 3rd event. We haven’t seen any signs of the dude that was a 45 in Back and Fly in HS.

And the even bigger story will be how awesome those Bears Relays will be. At this point I’m gonna be shocked if Cal doesn’t win NCs. They have too much to work with and the Durden Taper Magic on those freshman is gonna be something else this year… I can feel it.

If Hoffer is going 40.5, it means his over the water speed has improved a lot…which would be interesting come this summer.

His first Durden taper could be magical. Assuming that, Dressel is still the class of the sprints going away.

A better question is would Dressel swim the 100 free or chase the 200 fly American record on the final day? I also wonder if it will be 100 fly or 100 breast? If he swims the 100 breast it’s a given he will go under 50 & being the 1st to crack that barrier will be hard to pass up. Lots of choices and this is likely Dressel’s last SCY peak seasonal meet…after this he takes a wrecking ball to the SCM record books as a pro.

I’m looking forward to watching Dressel, but I’m almost more exited to see what all of these freshman can do. Hoffer, Katz, Grieshop, etc.